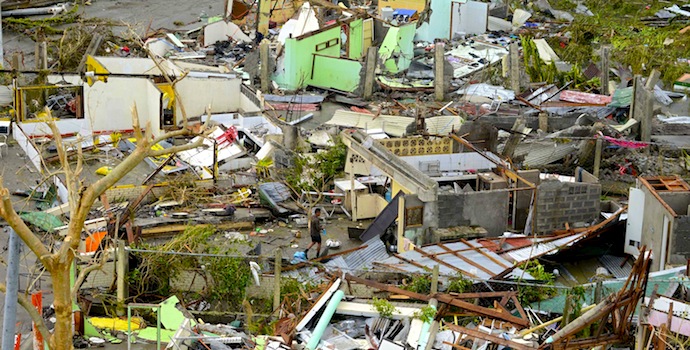 On Thursday, November 7, 2013 Typhoon Haiyan first struck the Philippines, hitting the country with what could be the strongest sustained cyclone winds ever recorded. More than 20,000 homes were flattened and 800,000 people evacuated. Initial death toll estimates were 10,000, though Philippines' President Benigno Aquino recently told CNN the final number would likely be closer to around 2,500.

On the ground, the situation is dire. The government of the Philippines declared a State of National Calamity. More than 2 million people need food aid. According to a statement from the United Nations, "Women and children are begging on the streets for donations." The Philippines’ UNICEF representative stated that with a "severe shortage" of clean water, food, basic sanitation and shelter, the situation is "very hideous." The damaged infrastructure is making a very bad situation even worse.

We can’t get to the people. The roads have to be cleared. The airport is only functional for military planes. There is aid arriving from all over the world but to get it to the people that is the really hard thing.

How You Can Get Involved in Relief Efforts

At Go Overseas, we have received many messages from people around the world wanting to volunteer their time. For example, someone wrote us, "Clearly the Philippines have been hit hard…and can only imagine how much needs to be done. I'm offering my time, to help clean/rebuild/cook & serve or any other purpose. I'm quite willing to give 2 weeks of my time and potentially more." 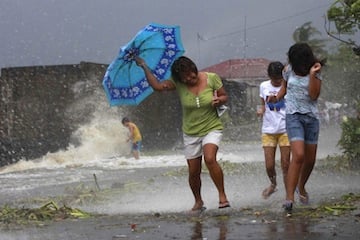 It is wonderful that so many are moved to help people affected by Typhoon Haiyan. The truth of the matter is that in the immediate aftermath of a natural disaster, as we saw in relatively recent disasters like the earthquake in Haiti and the tsunami in Japan, what is most needed is NOT volunteers from abroad to do things like hand out food and water. What is needed first and foremost is funds.

Offering your time and a willing pair of helping hands might seem the best option, but for a number of reasons, donating, at least in the immediate aftermath of a disaster, is the better option. Why, you may be wondering, would a website dedicated to helping others meaningfully volunteer abroad be telling you NOT to volunteer in the Philippines right now?

As natural disasters wreak havoc on a country’s infrastructure, it is difficult for volunteers to even get to the country, let alone move around within it. Electricity is frequently knocked out, as is currently the case in the Philippines, with many power lines going down. Secondly, as the suffering continues, people can become desperate, creating potentially unstable social situations. In the city of Tacloban, a city laid to waste by Typhoon Haiyan, food and other items have been taken from shops due to a lack of other options. Store owners in the capital of the hard-hit province of Leyte have organized and come together to defend their merchandise with deadly force.

Sanitary conditions become another huge challenge, with situations like the one described by Richard Gordon, chairman of the Philippine Red Cross with "…bodies in the water, bodies on the bridges, bodies on the side of the road." Combined with very common post-disaster situations like a lack of clean water, areas devastated by natural disasters also face the very real threat of a health crisis. Cases of dysentery have already been reported in the Philippines.

Offering your time and a willing pair of helping hands might seem the best option, but for a number of reasons, donating, at least in the immediate aftermath of a disaster, is the better option.

That is not to say that volunteers have on place in relief efforts. There are definitely opportunities for volunteers to help, for example with re-building efforts, in the longer-term (check out volunteer projects in the Philippines in the next year or so). In the meantime, the best thing to do is to empower relief organizations already on the ground. With more aid on the way, your dollars will help to provide immediate relief to people in the Philippines through your donations.

Here are some top organizations working in the Philippines to provide relief for survivors of Typhoon Haiyan.

Organizations Working on Relief Efforts in the Philippines

Many of us outside the Philippines see the moving images and read the compelling stories that put a personal face on the tragedy. We desperately want to do our part to help. And maybe this isn't the answer you were looking for when you opened this article, but it is the best avenue to offer support and relief to the Philippines currently. Get involved and stay involved!

Update as of Dec. 3, 2013: It's been not quite one month since Typhoon Haiyan hit, and organizations have begun to launch programs for volunteers from abroad to come to the Philippines and help with the rebuilding efforts.