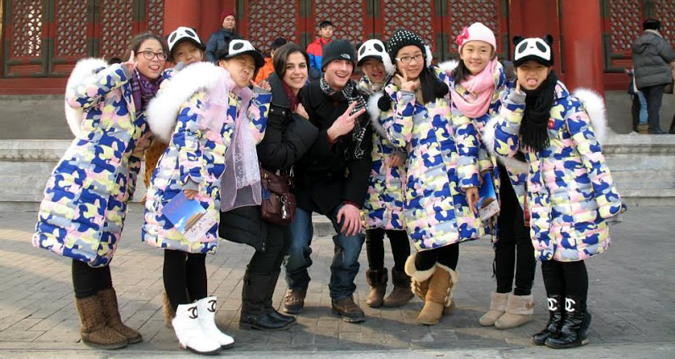 Studying abroad in China is like signing up for a tough-mudder marathon when you’ve never once set foot on a treadmill in your life. You, and all of your loved ones, can’t understand why you would consciously, willingly put yourself through such deliberate hardship, and ask things like, “Sweetie, why can’t you study in, why perhaps, London?”

Because you’re hardcore, that’s why. You see the future and you want to learn CHINESE so you can be a rightful badass for the rest of your wealthy, never-unemployed-for-a-day life.

Let’s take a quick overview of your life when you choose this, ahem, higher path of overseas education:

Things Only Study Abroad Students in China Get:

1. If you don't speak any Chinese, your first week in China is, put simply, a bewildering nightmare. You probably expected it to be hard, but this is like being beamed down from an alien hovercraft onto PLANET CHINA. Is it too late to switch to, um, Australia?

2. If you do speak Chinese, your first week in China spoon-feeds your ego an exquisite 5-course meal and a fine red wine. You have never felt so blissfully, unabashedly, uproariously, GLORIOUSLY full of yourself.

3. But on the first day of class, your Chinese professor informs you the grading policy of the class will be as follows: the class is graded on a steep, merciless curve and only one pupil receives an “A.” With this news, you can safely kiss your inflated American GPA goodbye.

4. You begin the sanity-crushing task of memorizing thousands of little pictures for a living. After awhile, it has a kind of hypnotizing effect you start to enjoy and you settle into the groove, at peace with spending most of your days in the library alongside a good portion of China's under 25 population.

5. You spend a lot of time on your homework, but you spend even more time trying to figure out how to get on Facebook and YouTube.

6. While trying to make friends, you notice that everyone who's anyone asks for your QQ number.

7. Your first trip to the supermarket in China is alarming. It's like a museum of Earth's weirdest, most questionable, sensory-assaulting, inedible food-like products. You make multiple trips before actually buying anything, trying in vain to find a few items that aren't made of or smell like prawns.

8. You make your first local friend, who graciously invites you to eat. It's even more terrifying than the grocery store. Everything she orders comes out with eight legs, all still fighting for life. She tells you this is a regional specialty and that lowers your blood pressure and this improves your complexion. Out of sheer desperation to make friends, you spend half of dinner gnawing on chunks of unclassifiable terrestrial species and discretely spitting octopus into your napkin.

9. It's embarrassing to admit, but your hands actually hurt from using chopsticks every day.

10. Every time a Chinese person compliments you on your proficient use of chopsticks, or for that matter when they tell you “Your Chinese is so good!” after you've barely had the chance to say “Ni hao,” you find yourself needing to enroll in another course: anger management.

11. After two weeks, you reluctantly download this QQ thing. You realize it's the only way you're ever going to fit in.

12. You have a Skype date with your best friend who is spending the semester in Australia. He is surfing in the mornings and taking every course pass/fail. He does not have to endure octopus dates, sore chopstick hands, and new social media software. You begin to question every decision you ever made in your life that has brought you to China in the first place.

13. Then you discover the unexpected answer: bubble tea. In large volumes, multiple times per day. At first you weren't so sure about the “bubble” part, but now you can't shake the addiction. This makes everything worth it.

14. You discover you actually really like Chinese food (at least the identifiable stuff), but you're secretly craving a Big Mac ALL THE TIME. Pride, and pride alone, keeps you from going within a 3 block radius of McDonald's for the first month. You're in this for the culture, damn it, and you will not be caught dead in an American fast food establishment!

15. After five weeks on a straight rice, dumplings, noodles, and Kung Pao Chicken diet, you are a shell of a human being and shamelessly tell the next taxi driver you see to drive you straight to the nearest McDonald's, where you order a Big Mac with extra cheese, extra pickles, a large fries, and an Oreo McFlurry. You finish all of it in ten breathless minutes and have zero regrets.

16. Your parents call from home and you answer "Wei...?" in a perfect Beijing accent. They hang up in confusion and write you an e-mail to confirm your local number. Congratulations!

17. You have successfully acquired a local boyfriend or girlfriend, which is a thinly disguised language-partner-with-benefits. Double congratulations!

18. You've gotten used to the passive aggressive fights at each meal over the best dishes on the swirly table, as well as the not-so-passive aggressive fight over the bill at the end. You pull your weight in gesturing with your wallet and arguing that this time you “qing ke.” But you're foreign and you're scoring free lunch 9 times of 10. This is awesome.

19. You've also been playing this “dice game” in the club every Friday and Saturday (and Wednesday if it's ladies night. And Thursday if it's 2x1 drinks). After several months of dedicated practice, you still have no idea how it works. But you always get free shots with the locals and everyone loves that you seemingly know what's going on.

20. Speaking of which, your alcohol tolerance has never been this good. The Chinese still drink you under the table, but the “bai jiu” has gotten more tolerable and mixing everything with green tea somehow makes the enormous amount of booze you consume on a regular basis appear less blatantly self-destructive.

21. Nevertheless, you've never endured hangovers so painful in your entire life. China: 1, You: -2.

22. The only thing that makes you feel better, besides virtually bathing in bubble tea, is having your hair washed for $3 at the corner salon by a gay Chinese man. WHY did you not know about this sooner?

23. You see another foreigner for the first time in weeks and literally STARE them down. There is also this weird sensation that you should at least say hello or give the nod of mutual “laowai” acknowledgment. Perhaps you have been in China for too long now...

24. Yup, you have, and you know why? You're completely addicted to QQ. This reminds you of everything you didn't realize you missed about AOL circa 1998.

25. Then you catch yourself doing that thing where you speak English with little-to-no grammar and a vague, unidentifiable foreign accent. Your friends from home ask (ahem, demand to know) when you're coming back.

26. Despite your sacrificial cultural adaptations and burgeoning language prowess, you still eat the same thing every day (“Do you have Kung Pao Chicken...?”). Because although you can discuss the political implications of the Cultural Revolution in modern China in Mandarin, you still can't read a menu.

27. All in all, your Chinese professor gave you a B- for the semester. Considering all those nights spent with the dice and green tea vodka shots, you're pleasantly surprised.

28. Reluctantly, you finally leave China (your visa expired and your English is in critical condition). After a week of gorging on Mexican food, cheese, and red wine, your ego is the one starving. It demands a trip to the local Chinatown, non-Chinese speaking friends (mere mortals!) in tow. You own the streets, beaming with pride as your friends watch your Mandarin motormouth with undisguised astonishment.

29. In these moments, you know full well that learning Chinese is like having the world's coolest superpower.

And it was worth every minute it took to get you there.