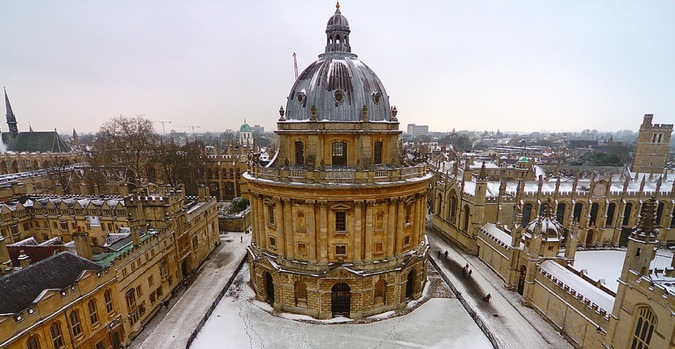 The United Kingdom continues to be the most popular destination for U.S. students to study abroad year after year (35,000 in 2012) and it’s clear to see why.

Their drinking age of 18 years means no lack of partying in university. Universities in the country rank just as high as in the USA for academics on a world scale. Plus, there is no language barrier for U.S. citizens to overcome, just a sexy accent, which may make study abroad in the U.K. even more attractive for some.

Of all the university-packed cities in this great country to choose from, London is by far the most popular, but it’s not the only city to study abroad in the U.K. and it may not be the best for you. If there is one thing US tourists crossing the pond are guilty of after a visit, it’s claiming that they know the U.K. after only visiting London.

The U.K. is not just London.

London is a fantastic place to study abroad, but the price of living and business of the city may have you looking for other options. Made up of England, Wales, Northern Ireland, and Scotland, every corner of the country offers a completely different culture, history, accent, and learning experience for foreign students. These five places to study abroad in the U.K. other than London will help you understand what the rest of the country has to offer its visiting students.

(Related: What It's Really Like to Study Abroad in the U.K.)

1. Leeds, England: Party With the Brits

Mention Leeds to any British 20-something and they’ll rave about the college town’s nightlife and incredible drink deals. Whether it’s Oporto’s club scene or the laid back vibe and beer deals at places like North Bar that appeal to you - Leeds has no shortage of places for the U.K. Uni student to party.

All in all, Leeds is what American’s would call a college town.

Though Leeds has everything a college student could want at their fingertips, students will find it easy to explore the rest of the U.K. and Europe from here as well. The Northern city has an international airport as well as train and bus stations in town. To keep all the parents of study abroad students happy, University of Leeds ranks highly for academia as well. According to The Guardian's University Guide, “In the QS World University Rankings 2012, Leeds came 17th out of the U.K. universities.”

All in all, Leeds is what American’s would call a college town. University students make up a large portion of the population here and come from all over the U.K. and the rest of the world. So if you want to really feel what it’s like to be a British Uni student and be won over by more than just Hugh Grant accents (Northern accents are the best!), then Leeds is your study abroad destination in the U.K.

This famous Scottish School is known best in recent times as the place where Prince William met Kate Middleton. A royal meets a commoner. They fall in love, have a fairy tale wedding and a princess is made. It’s the stuff of childhood dreams.

Yes, this is a university chosen by royalty as well as big names in politics, entertainment, literature and more, so your parents should have no problem approving a semester abroad here. It’s clear to see why so many prominent Brits choose St. Andrews as their university too. Home to the world’s oldest and most sought-after golf course, the University of St. Andrews differs from normal campuses as it’s built into the stunning Scottish town.

University of St. Andrews is one study abroad experience that you can boast about on your resume and will tell stories about to people for the rest of your life.

Located on the North Sea, you’ll be attending university in a location people only dream of visiting one day. The history of this town and university only add to its beauty. Founded in 1413, University of St. Andrews is the oldest in Scotland and third oldest in the English-speaking world.

3. Oxford, England: Get Your Nerd On.

University of St. Andrews may have been Prince William’s pick for academia, but when it comes to the very best universities in the UK for education, history and prestige, nothing quite compares to Oxford and Cambridge. The two top-tier universities have been competing for everything from academia to rowing for centuries and while Cambridge did rate higher for the former in 2013, Oxford beats them out on our list for one reason: Harry Potter film locations.

For history lovers and those who want a semester abroad in an idyllic English setting, it doesn’t get more perfect than University of Oxford.

Yes, Harry Potter was filmed at Oxford and when one thinks of Hogwarts there really is no place that compares to it in real life quite like University of Oxford. On top of Christ Church's dining hall and more of Oxford campus making it on screen, the school has been an inspiration to other great works of fiction including the inspiration for Alice in Wonderland. Lewis Carroll attended University of Oxford as well as 26 Prime Ministers, 50 Nobel Prize Winners, 120 Olympic Medal Winners and many more.

For history lovers and those who want a semester abroad in an idyllic English setting, it doesn’t get more perfect than University of Oxford which dates back to the 13th century. Feel inspired like Carroll, mingle with world leaders like President Bill Clinton (he was a Rhodes Scholar here), but please don’t get into as much mischief as Harry, Ron and Hermione.

Of all the coastal countries in Europe, you wouldn’t thinking of the U.K. for having the continent’s top beaches.

You would be wrong.

Rhossili Bay in Swansea, South Wales was rated as Europe’s third best beach and the U.K.’s first in a 2013 Tripadvisor poll. This popular Welsh beach location is renowned for its unspoiled sands, colorful coastal hills and serene waters. Basically a dream location for study abroad students who either love the laid back beach life and/or are interested in marine studies.

Here you’ll get to know Welsh culture and maybe even learn a few words in the native tongue.

Swansea University is located right on the beach overlooking Swansea Bay and the town is also home to Swansea Metropolitan University and Gower College, making it a popular destination for university life in Britain. Here you’ll get to know Welsh culture and maybe even learn a few words in the native tongue. Furthermore, the price of living in Wales is tremendously lower than that of London.

With the vast and beautiful British countryside in mind, we reach our peak with this last study abroad alternative to London.

In fact, you may already have caught a glimpse. In 2011 a little series premiered on HBO called Game of Thrones. This fantasy drama might be the most-talked about show, ever, on social media for things like their reckless killing off of popular characters, Red Wedding and the epic scenery.

Where can you go to visit Castle Black, Winterfell and more?

Northern Ireland of course and Belfast is your gateway to it all, but also rich with culture and a turmoultous history.

Belfast is the largest city in Northern Ireland and while the city went through a lot of turmoil in the 20th Century, it's a popular place to visit and live in the U.K. once again.

Belfast is the largest city in Northern Ireland and while the city went through a lot of turmoil in the 20th Century, IRA bombings, “Bloody Sunday” and more, its resilience and alternative culture have made it a popular place to visit and live in the U.K. once again. Whether going on a black taxi tour or visiting the site where the Titanic was built, Belfast is a place where some of the world’s most well-known historical happenings, good or bad, come to life, and Queen’s University is the perfect place to learn about them all, before seeing where they took place for yourself.

Beyond history and incredible scenery, you’ll be able to dive deeper into the culture of Northern Ireland and you’ll spend far less on living expenses than you would in London. You might even bump into John Snow - that is if they don’t kill him off in the next season.

It’s clear to see why so many American college students flock to London for their study abroad experience. British culture and a booming city life pull people into the U.K. and London is the country’s most popular entrance point, but it’s not the only great place to study abroad in the U.K.. If you had been considering London before, you may just find the options mentioned above more suited to your personality and needs...