Skip to main content
Javier Hernandez is from San Francisco, California. He graduated from San Francisco State University in May 2012 and worked in BIOFarm, Shanghai following his graduation. He is 25 years old and he loves to explore new places, try new food, and make new friends.

Why did you decide to intern abroad with Global Apprenticeship in Shanghai?

Javier: Cristina Lau, the director of the program, dropped by San Francisco State University and talked about what the program did in Shanghai and how there were different opportunities for internships. She talked about an organic farm called BIOfarm, so I became interested on what she had to say. I wanted to learn more about organic food production, and I also wanted to travel to China to experience the culture first hand, so this learning opportunity came quite well to me.

Describe your day to day activities as an intern in Shanghai. 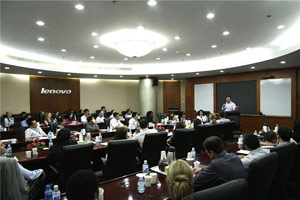 Javier: Unlike most of the other interns in the program, I didn't live in the center of the city, nor did I spend much time in an office. Instead, I spent half my day working on the fields tending and harvesting crops and the other half I would help BIOFarm create a website for organic farmers in China. I enjoyed working with the farmers because I experienced how hard they had to work to cultivate the soil, and how much they cared for the farm and the people it housed.

Javier: I had the biggest impact from interacting with the people in the farm and Shanghai overall. The cultural difference between the farmers and I was difficult to overcome at times because I wasn't used to many things in China. I wasn't used to the traffic rules for pedestrians, train or bus schedules, restaurants, haggling for prices in shops, or how to even buy groceries--the language barrier didn't make this tasks any easier either. However, little by little, I learned how to assimilate the lifestyle and learned a few Mandarin phrases to make some of my needs understood. At the end of my journey in the farm, I felt like many of the people welcomed me and enjoyed my presence, and I was delighted to be a part of their family, even if it was only temporary.

Highlights: I absolutely enjoyed watching the crops I planted grow from seeds into plants because I could see a corn stalk and tell myself, “I planted that seed.” I found the plant symbolic because it represented my personal growth, for I was the seed planted in a foreign soil, and with each day that passed, I grew to understand more about Chinese people and their culture. As far as my overall experience, I found nothing more rewarding then the friendships I built, and the offering to come back with open arms. I’ve found very few places where people are genuinely friendly, and BIOfarm in China is definitely a place that welcomes and respects its interns.

Morning: I started my day by walking to the farm and reporting for my duties for the morning shift. At first, I had a lot of difficulty understanding the tasks I was assigned because I didn’t know what to do or what the supervisor was telling me; however, as the days progressed I was able to simply follow the farmers, look what tools they had and then I would pick the same tool and help them on their day. Depending on the task, some days I felt the work was pretty tough because I would have to work under the scorching heat of the sun and inside the green houses, a place where air would barely circulate. I remember sweating a lot due to the heavy physical labor and the heat, but I was satisfied by finishing my assigned duties even under rigid conditions. 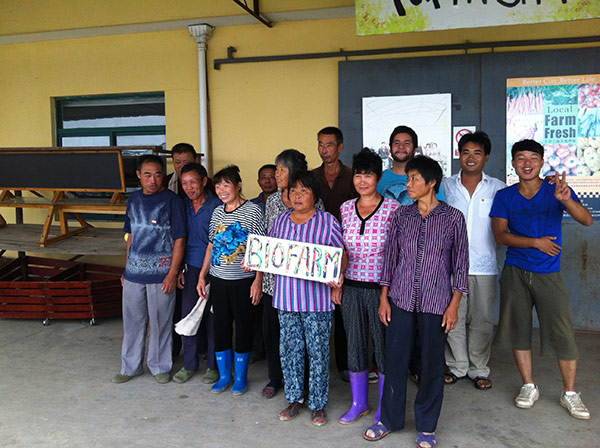 Afternoon: I worked in the farm’s offices during the afternoon building a website for international farmers. BIOFarm asked me to construct a modest website where organic farmers from China, and even around the world, can convene and exchange resources. Creating the website was far easier then working on the fields, but it required a great deal of resourcefulness. BIOFarm asked to include features, such as a map that showed farms’ locations, which I was not used to creating. Thankfully, I was able to search all over the internet and input most of the specs the farm wanted to include on the website. After the afternoon shift was done, I would head home under the beautiful afternoon home and get ready for a great dinner with my roommates.

Evening: Evenings were the best part of the day, for I had a lot of time to appreciate the people and the environment. Once I was in my house, I would go out to the balcony and gaze at the beautiful sky, watch the giddy children walk about with their grandparents, feel the gentle breeze of the summer air, and hear the distant chatter of my roommates preparing dinner. Basking on the serenity of the environment, I would sometimes read a book or listen to music while the smell of the food filled the air nearby. Later, I would join my roommates for a family shared meal, and we would laugh at our conversation because we could barely understand what we were saying to each other.

Do you want a real experience in China? Where you can dive into your field and learn as much as you can with personal mentorship from industry experts? You are guaranteed an internship that is customized to your career goals, personality, skill-set and availability. We hire for companies of all...