Take the leap and study with French and international students at the leading business school in Paris—Novancia. Newly formed in 2011 with stunning, modern facilities, Novancia is a member of AACSB International, and offers courses in business, entrepreneurship, commerce, and more—all in English.

By directly enrolling at Novancia, you attend all of your Masters-level classes with highly motivated French and international Novancia students who work together on projects, simulations, and practical business research.

Check out this center for yourself through our virtual tours at our website.

IES was a great program. Although the classes varied slightly from those listed on the website, they were still interesting and taught in French by French professors. Students have the chance to volunteer or intern as one of their courses, which I highly recommend. The program offers Friday excursions to local museums and other points of interest, as well as a few excursions around France.

This program was the best experience ever. My host mother was fantastic although she spoke no English. She cooked dinner for us three nights a week and the rest of the time we could do as we pleased. Classes are arranged so that you have plenty of time during the day or the evening to explore Paris! Weekends are great for travel. IES hosts several excursions which are all great but also optional. Overall this was a wonderful program where I made many close friends and my French fluency improved drastically!

What would you improve about this program?
I would have liked more opportunities to engage in conversation with native French speakers!
Did you find this review helpful?
Vote up! 0
Vote down! 0

Everyday, I would wake up in my homestay (where my host mother did not speak a word of English and was so sweet) and meet up with friends at an attraction in Paris before class (which was Monday- Thursday 1-4 for 2 classes). I got to travel all over Paris and we had other excursions (Giverny and Reims) They offered different activities every week (optional but FUN) such as walks/tours, a boat ride, picnics, etc. We also had the weekends off to travel if we wanted (I did travel to Lyon one weekend but there was so much to see in Paris). It was a truly amazing experience for me and helped me to become fluent in French and meet amazing friends!

Program
IES Abroad Paris DE – Novancia International
Maura McManus studied abroad in Paris, France, through the IES Abroad Paris - French studies program from January - May 2013. Maura hails from the Midwest and is a junior at the University of Minnesota-Twin Cities. She studies French, Italian, and global studies, and will graduate this May with a B.A. French studies. She intends to pursue foreign policy and human rights work. 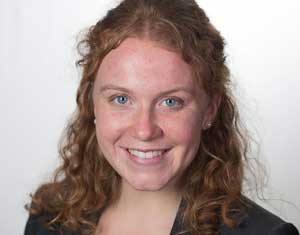 Maura: IES Abroad gives students the opportunity to volunteer or complete an internship as one of their courses. I chose to do an internship and was placed at a not-for-profit organization called Association Caméléon. This internship allowed me to practice my French in a professional office setting for 10 hours/week, which is something that I could not do at my home university.

At Caméléon I performed a variety of tasks including translation and the editorial work. This opportunity not only helped me to improve my French skills but also gave me valuable experience working with human rights, which is the field in which I wish to pursue a career. Completing an internship in a foreign country and in a French-speaking environment is a phenomenal experience and looks great on a resume. 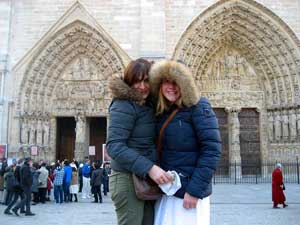 Maura: I am going to cheat and pick three places - I tried to narrow it down but just couldn't. First up, the Alps. I am not a big skier, and the biggest slopes that I have mastered are the great, artificial snow-covered mountains of Wisconsin, but I nevertheless decided to ski in the Alps. The breathtaking views of the mountains and the mile-long runs (that were frighteningly steep) were amazing.

Secondly, the D-Day beaches in Normandy. The experience was moving and made me feel so incredibly proud to be an American. Lastly, Cinque Terre, Italy. Five small, quaint towns along the country's western coast are connected by a beautiful hiking trail. The trail takes you through the towns, up hills, and through fields all along the Mediterranean coast. I highly recommend visiting all of these places!

Maura: IES focuses equally on academics and cultural immersion. Students must take one grammar course (determined by a placement test), and the other courses are electives. These include photography, History of Paris, French politics, an internship, etc. Students may take classes at an outside university such as the Sorbonne, too. I took 16 credits and was in school from 10am - 2pm Monday - Thursday. This left weekday afternoons for my internship and having fun!

There are no classes on Fridays, so IES plans optional outings to museums or local sites of interest. The classes involve excursions, too. For example, Art and Architecture met at the Louvre every other week. Additionally, IES runs a weekly conversation group with local French speakers and offers optional weekend daytrips to other French cities for a small fee. 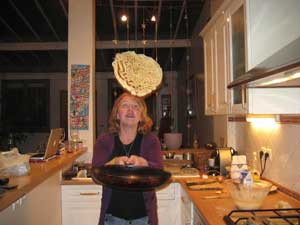 Maura: As with suggested places to visit, I am going to take the easy way out and tell you about multiple must-have foods from my semester. Let's face it, you're in France - everything is a must-have! First, pistachio macaroons. All flavors of macaroons are great, but pistachio is out-of-this-world.

Next, eat all of the bread and cheese that you can. Go to boulangeries and try the various baguettes, preferably warm from the oven. As for cheese, the same rule applies: try them all. Taste Camembert, Brie, and fromage de chèvre. Try the staples at restaurants: French onion soup, steak-frites, and quiche Lorraine. Nutella spread is overrated – Speculoos spread is to die for. Crêpes are good, but brioche bread from the boulangerie is even better. In other words, eat a lot and you can't go wrong!

Maura: You're going to bring too many clothes. It will inevitably happen. There are two things that I missed, though. First, a rain jacket or umbrella. It seemed to rain daily in Paris, normally just in the morning, but that was as I was walking to class. I bought an umbrella and it was a great purchase.

Second, boots. I had heard that it never snowed in Paris, so I thought that I would be smart and save space in my suitcase by leaving out boots. In reality, however, there was snow on the ground for the first two months of the semester and rain during the last two. A versatile pair boots that work in rain and snow would have been a great thing to have!

END_OF_DOCUMENT_TOKEN_TO_BE_REPLACED