Our internship program was made with the goal of offering the best whale shark experience for our interns! During the 12 weeks our interns will learn how to do the research and they will become part of our team!

The internship program has designed to include a lot of field work experience. You will learn how to collect research data such as photo-ID, gender, size, record injuries, whale shark behavior and environmental data.

You will also do a lot of work on the computer building the photo-ID catalogue for the running season and comparing with the other 12 years and with 6 other locations that we work with! You will also submit data into the global data base.

All data we collect will help the whale shark management of the region. You will receive scientific training and presentations and be hosted by locals, giving you a better understanding the lifestyle in La Paz. 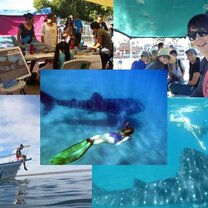 I visited La Paz for a well earned escape from work at Easter 2016. Although the internship is usually for 12 weeks I was welcomed by Demi and the team to assist as much as I could for the week while I was able. The hospitality was second to none and the professionalism and dedication associated with recording whale shark movements and teaching me as mach as they could in that short time was fantastic. For work reasons I was unable to stay in the designated accommodation but I was able to visit it and it was very comfortable and hospitable. The team went out of their way to socalise after boating hours and also assisted me in finding other excursions to do in the area. This is a beautiful part of Mexico that is enhanced by the hospitable and welcoming people. It was also a once in a lifetime opportunity to participate in a worthwhile scientific program. I look forward to returning when ever I am able.

What would you improve about this program?
I cannot think of anything as it was beyond my expectations.
6 people found this review helpful.
Helpful 

What an awesome experience, I stayed in La Paz for almost a month, while I was on sabbatical, and got the chance not only to dive with whale sharks, but also to produce informational videos in English and Spanish for the Organization, here's the English version - https://www.youtube.com/watch?v=w0jGiY_-O2c.
The team is absolutely gorgeous, Darren and Felipito have been extraordinary, from airport pick up on day 1 to my last day. The house is right next to the office and not far from the peer, you will love it La Paz!
Absolutely recommended
Luca

I first met Dení Ramírez on a scuba diving trip in the Sea of Cortez. She gave a presentation about whale sharks to the dive group, and on the last day of the trip we snorkeled with the sharks trying to help Dení gather data about them. This event created a shift within me; an urge to do what I love, travel, but with a purpose bloomed. Within a week of arriving back home I had signed up to spend over two months in La Paz, Mexico helping Dení with her research. This was one of the greatest experiences of my life.

I lived in a fun Mexican house with two other volunteers. We pedaled about La Paz on the bikes provided, and chatted with locals on our way to and from the office. My Spanish improved greatly from these interactions, and I definitely made a few people chuckle with my earliest attempts. Well, to be honest even with some of my later attempts. We met so many amazing and inspiring people through this program.

Our weekdays were spent either with the sharks or in the office. We swam up to four days a week with these magnificent creatures, and occasionally had specialty guests drop in such as dolphins, humpback whales, mobula rays and cow nosed rays. In the office we would run the photos we had gathered from swimming with the sharks through a database to see if there were any matches, and update each shark’s files with the behavioral data and documentation of injuries that we had gathered during the day.

Some of our weekends were spent doing trips to places like Todos Santos or participating in environmental events. The other two volunteers completed diving certifications. And we did two amazing camping trips. The first was to the island Espirito Santo, where I woke up to find wild rabbits hopping about me early in the morning, and we got to swim and cavort with young sea lions. The second was possibly my most amazing weekend, which is saying a lot as I have been blessed in life with many amazing and wonderful events. We camped on an island in Magdalena Bay. As we boated to the island we saw a mass migration of gray whales coming into the bay for shelter for the night. We watched bioluminescence froth about our ankles as we stood in the rolling waves and gazed at the sun give way to the starry night. While sleeping on sandy bluffs near the beach I awoke at some early hour to walk down to the water and watch dolphins feeding, beneath the glow of the moon, less than five feet from shore. In the morning, I was awakened by the sounds of a mother gray whale and her calf exhaling as they drifted languidly near shore. And finally, the most memorable of moments was when we interacted with gray whales on our way back to shore. A mother and calf came and played about our boat. At one point the mother swam beneath her calf and lifted it up to our boat, presenting her greatest treasure to us. I like to think, entrusting us to safe guard her child’s future, and showing us what there is to lose if we don’t change the way we treat and view our oceans.
This was an amazing opportunity to explore the Sea of Cortez, Southern Baja, and get up close to amazing wildlife. But not only that, this program is also a chance to help our oceans. Dení’s research helps push marine conservation forward and support protection for whale sharks and other marine species.

What would you improve about this program?
Perhaps scientific research papers could be handed out to volunteers for further reading.
6 people found this review helpful.
Helpful  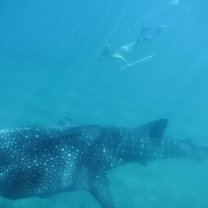 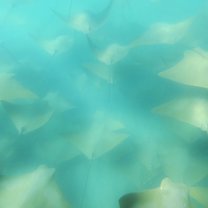 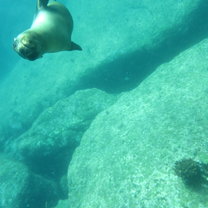 I found Whale Shark Mexico through Oceana and I am so glad I did. From the every first e-mail to the minute they dropped me at the airport for my flight back, the whole team was supportive, understanding and gracious.

I made new friends, tried new food, learned SO much about whale sharks and A LOT of other species. For example, Mobula rays, sea lions, sting rays etc. This was the first time I was snorkeling in the open sea and it was amazing. I really appreciated the team helping me adjust and become comfortable snorkeling.

We went on a boat trip 3 times a week and had 3 camping trips. We participated in an earth day festival in La Paz and went to a eco- conference/protest in Los Cabos. We also had the opportunity to go a trip with EPI to Eu Spiritu Santos Island where we swam with sea lions and had the rare chance to see a pod of Orcas!

During my one month with WSM I got to work with shark identifying software and ofcourse swim with whale sharks. The whole experience is one I will never forget and I would like thank the whole team for everything. The work they do is making a difference and is important in spreading awareness about these gentle giants. 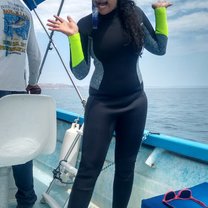 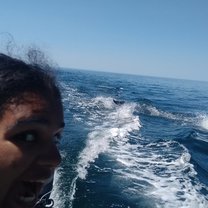 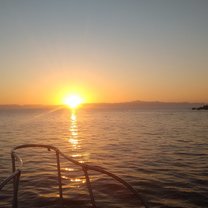 Whale Shark México, a project within the nonprofit organization ConCiencia Mexico, is dedicated to research, conservation, education and sustainable management of these charismatic giants, based in and around Baja California Mexico, with its main office in La Paz City. Whale shark Mexico is proud to be responsible for a continuous monitoring... END_OF_DOCUMENT_TOKEN_TO_BE_REPLACED