Skip to main content
Jeff Rohrer is a student at Harrisburg Area Community College in Harrisburg, PA, and is in the process of transferring to the University of Pittsburgh with dual majors in Chinese and Arabic. From December 20, 2011 to January 10, 2012, he traveled with a group of fellow students to Thailand. They taught English to elementary school students on the island of Klong Yang, which is south of Krabi on the Malay Peninsula. 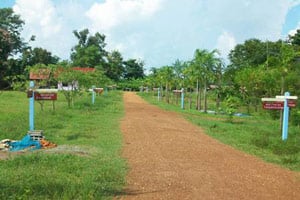 Why did you decide to volunteer with OMP in Thailand?

Jeff: I decided to volunteer for a number of reasons. I had never been to Asia before, so I wanted to learn more about the land, the culture and the people. I also wanted to get some experience teaching overseas, because I was considering going into the Peace Corps after college and wasn't really sure how I would fare trying to teach kids overseas. Plus, I had the winter break available, and going overseas to teach English just seemed like the most productive use of my time.

Jeff: The schedule was fairly simple: we awoke at around 7:30 each morning, got breakfast at our host family's house, and walked to the school. We (myself and four other volunteers) had a system where we split the classes between two teams, so no one would be overwhelmed. This was good, because teaching is exhausting; even with this schedule, we walked away tired at the end of the day.

The lessons were always a bit of an adventure; none of us were even conversational in Thai, so we had to rely a lot on hand gestures and non-verbal cues. A lot of our lessons were on simple concepts which could be explained through pictures and activities: directions, seasons, etc. For more advanced concepts (sentences and verbs) we often had to learn the Thai equivalent so we could explain the words to them. Different classes often understood things more or less quickly than their peers, so for some we had to constantly find new lessons and some needed a lot of review. At the end of the day, we all returned home and discussed what we had done, and formulated a plan for the next day before getting showers (Thailand is very hot and humid, so you shower at least twice a day).

Jeff: The kids really made the entire experience special. They really appreciate volunteers and are so excited to see you each day. They really make an effort to help you out- several would help to translate if we weren't being entirely clear, and they did their best to teach us Thai in return.

It's a two-way street; as you teach these kids, you really get to know them. They all have such different interests and personalities, and after a while you start to feel invested in their future. When we finally left, it was really hard on all of us because we had become so attached; one of the few things that made it bearable was the thought that we had made a positive impact on their lives.

Jeff: Taking this trip has really impacted my view of myself and my goals. I've decided to pursue teaching as a career and plan to spend several years after graduation serving in the Peace Corps. Ultimately, I hope to teach in an American School overseas. It's also affected me personally- I've started to immerse myself in Buddhism and Islam, the two most prevalent religions in Thailand. I've learned a good bit about meditation, which really works for controlling stress. I think I've come away with a greater understanding of exactly how much we all have in common- regardless of culture, religion, race or language, we all are basically good and want to improve the world. We all want to see a better world for our children. I think if we stopped getting hung up on the differences between us and focused on what we all hold the same, we could solve a lot of the world's problems together.

Be the change. Be a real volunteer in a real and affordable grass roots project, offering relevant and qualifed support to overseas volunteers. Get the opportunity to work with the local people, to experience their country, village, culture and nature through their eyes. Depending on your skills you...