Skip to main content
Brooke Morgan is a 20 year-old New Jersey native who attends Elizabethtown College in Pennsylvania studying Business Administration. She studied abroad from August 28, 2012 until December 15, 2012 during her junior year of college. She has traveled to many locations in the caribbean, but this was her first time going to Europe. Brooke loves meeting new people, so studying abroad not knowing anyone was not a problem for her.

Why did you decide to study abroad with CISabroad? 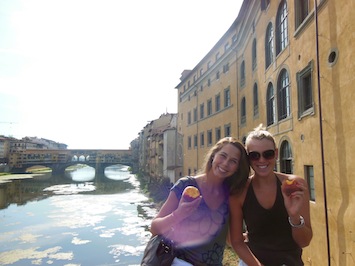 Brooke: One of the reasons I chose to study abroad is because I have an older sister who had studied abroad in Athens, Greece and had a great time. She used a different study abroad program than CISabroad but they were very similar.

I chose CISabroad because they were affiliated with my college at home and I would be able to pay my school directly and the grades transferred back. My parents are the type of people who require me to do my research before presenting them with a big decision, so I made sure that I knew my facts and figures before telling them about studying abroad.

I loved that CISabroad had tons of options on places to study. I knew I wanted to go to Italy, but they had many places I could go to, such as Florence, Rome, and Perugia. I chose Florence because it was not as small as Perugia, but not as big as Rome. It was the perfect happy-medium!

Brooke: What made this study abroad experience special for me was that I had never been to Europe before. Italy is very central in Europe, so traveling to other countries was a breeze! I went to Munich, Germany for Oktoberfest, Ireland for fall break, and Switzerland and Austria for weekend trips. Many students did way more traveling out of the country than me, but I focused on traveling around Italy. I went to over 15 cities within Italy alone! What also made this trip special for me was the friends I made. I did not know anyone when I arrived, but I left with friendships that I know will last a very long time.

Brooke: Studying abroad really helps give you a competitive advantage at a professional level. Being a business major, I took International Marketing so I could apply what I was learning to real life situations. When applying for summer internships, many of my interviewers had studied abroad also which helped me form a connection with them. Studying abroad also helped me mature through being taken out of my comfort zone. I used to be a girl who worried about everything, but studying abroad made me realize that I can do a lot more than I thought!

Study at the famous Florence University of the Arts, with classes from Fashion Marketing to Travel Writing, all taught in English. Become engaged with your new neighborhood through numerous service learning and community service opportunities. All housing and classes are located within walking...