Skip to main content
Ellie MacCarthy is from Sydney, Australia, is currently in her final year of university and working part time in the property industry. She enjoys travelling, Mexican food, playing hockey and sharing a few drinks and stories with friends.

What inspired you to volunteer abroad with Travellers Worldwide in Thailand? 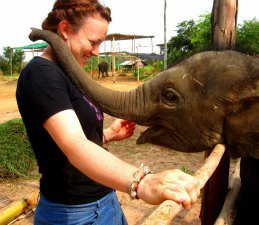 Ellie: It was a bit of a last minute changeover with very fortunate results, actually. My boyfriend and I had originally booked the elephant experience in Sri Lanka that was offered by Travellers Worldwide, having heard about it while we worked as travel agents. One of my colleagues had visited the Sri Lanka project and had some amazing stories and photos to share, so we decided to be a part of it and arranged to go in the final weeks of a big journey we were making back to Australia having been overseas for over a year.

What appealed to us was the opportunity to take the non-touristy avenue and have a real hands-on experience to get truly familiar a with these beautiful elephants. Then approximately five weeks before we were due to arrive, we were contacted by Travellers Worldwide with some unfortunate news that the program had been temporarily suspended due to some unforeseen political circumstances that were occurring at the time in Sri Lanka. Now while this may all sound like a very bad thing, in fact the staff were so helpful and understanding that, while it was a bit of a pickle at the time, it all worked out really really well.

Firstly the were very upfront about the circumstances and did not let us linger on the hope that the suspension would be lifted in time for our arrival. This was all conducted via email while we were backpacking through Spain, so they listened to our reasons behind wanting to do the program in order to make a number of suitable suggestions. It wasn't just a "Too bad, try again later" attitude... it was a "Let's work this out, what can we do to help?" attitude, which was exactly what we needed. To cut a long story short, we were able to switch our program to Thailand with very little fuss, and before we knew it there we were and had a great time... and I would not wish to have done it any differently (We'll just have to go back one day and do Sri Lanka too!). 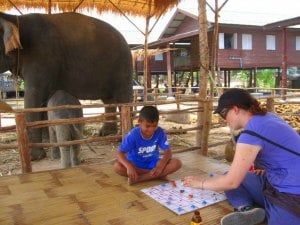 Ellie: Your day starts at around 7am for breakfast which included toast, fruit, eggs and when we were good - banana pancakes. Followed by a morning clean up of the elephants' sleeping areas from things like leftover sugarcane leaves, elephant poo (it's really not that bad, its fibrous, not smelly, and funny to throw at people) and other bits and pieces. You are given gloves, so don't worry too much, but always remember - you will get dirty and so will your stuff.

The rest of the morning varies from day to day, usually includes half a group driving to the sugarcane fields to cut down the elephants' morning tea, while the others stay behind to water some bamboo, work in the nursery or other odd jobs. Late morning is walk time, we spend about an hour taking the elephants to a water hole, it takes longer than you think because they stop a lot along the way to munch on whatever fancies them.

Next we have lunch, at a local restaurant where you will have most (if not all) your lunch and evening meals. It's important to remember that you will be eating Thai for lunch and dinner every day, so if you're a Thai food fan then you'll love it. Other snack shops are around where you can by chips/crisps and drinks/sodas to satisfy your sugar cravings if need be.

Evening time is chill out time, including dinner and maybe a visit to the massage/spa centre (highly recommended). You also find time to give yourself a wash, which is a basic water-and-bucket type situation. Don't be turned off, trust me when I say you won't care once you're there.

Sleep time is whenever you go to bed, and the sounds of hundreds of elephants in the vicinity will sing you into your slumber. 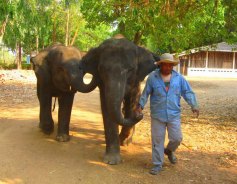 Ellie: Sarot, one of the mahouts on the program. When we arrived on the project, Sarot was one of the first mahouts to come forward and welcome us. He is so warm and friendly, I can always conjure up an image of his big broad smile that was so infectious with its genuine warmth. Despite the language barrier, Sarot was able to make himself understood, and we would all get by making jokes and pulling pranks, and he even taught us a few sentences in Thai.

All of the mahouts were very kind and welcoming, but Sarot took the opportunity to the next level and really tried to get to know you. I was heart broken when I heard about his elephant Nung Ning being taken away by her owner, she and Sarot had such a special bond and you could tell that the purpose of the program was really shining through for them. Hearing about Nung Ning really solidified, for me, the purpose behind the project and the need to support it. I was very relieved to hear that Sarot now has another elephant on the program and that he continues to demonstrate his belief in the purpose behind it.

Ellie: Not a single thing. I was very aware of making sure I had no regrets when I came away from Surin. That meant I persevered when it got hot and sweaty, and my body was covered in dust and all I wanted was a nice long shower. I would be rewarded by a cheeky elephant trunk sneaking over my shoulder looking for treats, and things like that. I have really given this question a lot of thought, and there is honestly nothing I would change. 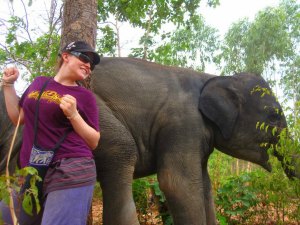 Ellie: I've always been aware that there are different cultures to mine, but this trip meant I was able to become part of one for a while. The astonishing thing was how easy it was to slip into this different skin and for it to quickly feel so normal. As a result, not only have I found myself more tolerant of differences and change, but I actively seek them and want to experience and understand them. My worldview differs now because I stop to question things and try and see things from other angles. All from spending two weeks with elephants!Go figure!