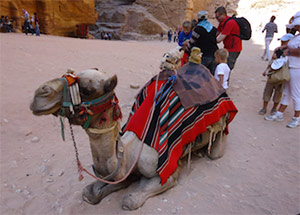 Highlights: The highlight of the trip was traveling with the SIT staff and the other students on the program. We spent ten days or so in Egypt, which was a great experience. We saw the pyramids, downtown Cairo, and the city of Alexandria. During a trip to the southern part of Jordan we spent a night in the Wadi Rum desert where we rode camels and rolled down sand dunes. In Aqaba SIT rented a boat and we spent the afternoon relaxing in the sun, snorkeling, and jumping off the boat into the Red Sea.

Morning: During a typical morning I ate breakfast in my house and walked a few blocks to meet my friend and catch a cab. We rode to the SIT building in Abdoun together and split the cab fare. Some cab drivers were chatty and others barely said a word to us. Once we got to the SIT building we made tea and coffee as we got ready for morning classes. The first half of the morning was spent studying colloquial Arabic and the second half was spent studying modern standard Arabic. There was a break between the two classes, which was generally spent drinking more tea and coffee.

Afternoon: After morning classes were over we took a lunch break. When it was warm (but not too warm!) we sat on the porch and ate lunch outside, which was nice and relaxing. During the afternoon we had one class, which was either the field study seminar class or the social modernization and change seminar. During the social modernization and change seminar various speakers came in and lectured, which was really interesting. The speakers ranged from university professors and government officials to tribal Bedouin leaders. After classes ended we typically did homework and then went to a local coffee shop or explored the shops downtown.

Evening: There wasn’t exactly a typical evening in Jordan. Sometimes we explored different parts of the city and other times we spent the evening at home with our host families. During the ISP period we spent many evenings in coffee shops working on our papers together.

Examine crucial issues in the Hashemite Kingdom of Jordan, a moderate Arab state grappling with political responsibility, social change, modernization, the effects of the Arab Spring, and regional conflicts. Jordan has made enormous strides recently in healthcare, literacy, and democratic and...