Skip to main content
Kristen Weymouth is 19 years old from Chevy Chase, Maryland, and is currently a first-year student at Colgate University. She was a member of the Thinking Beyond Borders class of 2013 and afterwards worked for Ashoka, a nonprofit in Washington, D.C. She enjoys hip-hop dance, the Fall season, and collecting rings.

Why did you decide to do a gap year with Thinking Beyond Borders? 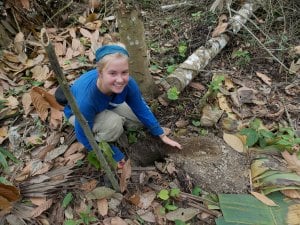 Kristen: I have always loved the adventure of traveling, and I much prefer exotic places before luxurious. When looking at gap year programs, I knew that I wanted to visit multiple countries that were very different from one another.

I wanted to learn more about the world and try to understand why we are faced with some of the global issues that we face today. However, I was nervous about traveling by myself, and I wanted to have some structure as to what I would be doing. TBB matched these requirements and went beyond them.

The diversity of the curriculum allows TBB students to be exposed to different parts of the world, different global issues, and different perspectives. From traveling to underdeveloped areas, living in homestays, working in communities, attending seminars about issues that pertain to those communities, creating media projects that reflect a certain aspect of a certain issue, and vacation time, each day becomes jam packed with learning and broadening one’s assumptions.

What was the most memorable moment of your experience?

Kristen: I have too many memorable moments, but I do have one that was particularly moving to me.

When I was living in India, I was teaching English in the slums, and each day I would conduct a lesson plan for what I would teach the kids. However, I faced many obstacles with my teaching because the kids had a sporadic attendance record and were malnourished which made them less focused. They also couldn’t read Hindi, so teaching them English became a monstrous task. I became frustrated with how little progress I seemed to be making. However, on the last day of my teaching, all of the kids showed up 15 minutes early. I decided to make my last day a fun day, so we played many games and were laughing the entire time.

When it was finally time to say goodbye, my youngest student, Pooja, came up to me, kissed my hands, and, in Hindi, said “Thank you, Sister.” As she walked out the door, she turned around and said the one word she learned in my class, “Happy”, while giving the gesture I taught her for it: smile and have two thumbs up.

All my frustration and fear of incompetence in teaching then melted away. Knowing that I had had a small impact on this child, no matter how miniscule, meant the world to me. After seeing the poverty that engrosses the Indian slums, being able to reach out to Pooja gave me hope for the future of those slums.

Kristen: While living in South Africa, we worked in Plettenberg Bay, shadowing caregivers in different townships and helping them with their visits with their patients. My caregiver introduced me to one of her patients who had an incredibly sad story. Her patient had contracted HIV and was too afraid to tell her husband about it. When she became very ill, she told her husband about her infection.

He said he would be supportive of her and her needs, but two days later she woke up and he was gone.My caregiver luckily found her a couple days later in her bed and has since been visiting her regularly to make sure she is taking her medicines and is healing.

Because of the stigma surrounding HIV in South Africa, her neighbors have stopped talking to her, and her illness has made her unable to work. When I first met this woman, I was moved and inspired by her courage to share her story with me. She couldn’t speak English, and I couldn’t speak Xosa, yet we became close friends just by having each other as company.

Despite her condition, she remains positive and is lively, especially when she has guests. She called me “Tandu,” which is Xosa for “love”, and we cried when we had to say goodbye. I haven’t been able to contact her since I’ve left, so I don’t know if she has become ill again or if her children are going to be okay. She will always be a dear friend to me, and I hope that someday our paths may cross again. 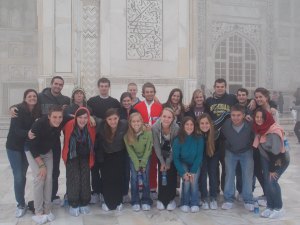 Kristen: I would have spent more time with my host families. In the beginning of every home-stay that I was in, I made a strong effort to talk to my host families as best as I could. However, as I became busier with the other activities I was doing (work in the community, seminars, media projects), I would come back to the house exhausted and wanting alone time.

I ended up spending my evenings in my room reading or listening to music, returning to my habits from back in the U.S. where I was in my room constantly and being antisocial. Because I didn’t push through my exhaustion and hang out with my host families, I missed out on multiple opportunities to bond with them. Had I sat at the dinner table longer with them every night, I probably would have been much closer with them.

Kristen: TBB helped me emotionally and mentally mature. I learned the importance of seeing from another’s perspective, and I’ve incorporated it into my academic work in college. I have been much more focused in my college classes and feel more mentally prepared than before.

I feel like I have more control over my life and have stopped relying on others to make decisions for me. Before taking a gap year, I was pretty quiet and timid around people who I didn’t know very well, but after being introduced to new people constantly on TBB, I’ve become more outgoing and more apt to reach out to others, making the transition to college much smoother.

I’ve found my voice and have a better grounding in my beliefs, and I am comfortable voicing them in discussions. TBB gave me the confidence and the courage to step outside of my comfort zone and to try things that have scared me for years.

We believe that a gap year should offer more than just travel or service. Our Global Gap year is our signature program. You'll live, explore, and learn in six countries over two semesters with new friends who'll be with you for life. This is the ultimate program for students who want to make the...