Skip to main content
Dan is a senior marketing major at the University of Mount Union in Alliance, Ohio. The 22 year old native of Amherst, Ohio fell in love with travel because of his experience in Thailand. He hopes to someday change the world for the better by using his marketing degree in the non-profit sector. Dan: By far it was Pai, Thailand. Pai is about a 4-hour bus trip north of Chiang Mai and it was completely worth the trip. Its simply a small town with a few shops and as we all agreed it was more of what we expected when we though of Thailand. A few friends and I just wanted to have a weekend getaway. We went with no real plans, found a little bungalow that we could rent for a few days.

How has this experience impacted your future? (Personally, professionally, academically, etc)

Dan: This trip has changed my life. That is so cliché to say, I know, but once you leave the country and you experience a culture in an intimate way that only study abroad can give you, it changes your life.

Professionally, I’ve gotten multiple internships because of my experience abroad. Academically, I’ve won additional scholarships. The biggest impact study abroad had on me was on my personal life. Personally, I’ve become more outgoing and open-minded.

I’ve become more independent and I’ve traveled on my own across the country. I wish I could have studied abroad more during my time at school. I’m glad that I had the opportunity, because it did change my life for the better.

Dan: It seems simple, but I would have rented a bike. When I left for Thailand, I wasn’t expecting to do much traveling around town. I was afraid to explore on my own or to get lost. After a few weeks in Chiang Mai, I realized that there is so much to see and the population is so incredibly helpful that I wouldn’t have had any problems with a bike. Having a bike would have saved a lot of travel time.

At the same time I’m glad I could walk around the city and ‘stop and smell the roses’ a bit. Chiang Mai is so beautiful and there is always a store to pop your head in or a restaurant to try. The moral of the story: Doesn’t matter if it’s on a bike or on foot, go out and explore!

Dan: When we were in the city we really never ran into any language barriers. Most students and the school or people in town knew enough English that you could get buy with most phrases and gestures.

What surprised me the most was when someone didn’t understand you, they would apologize that their English wasn’t better. It took me off guard because I would think, “I’m in your country, I should be apologizing.”

Outside of major cities we ran into more language difficulties, but when you immerse yourself in a new language you pick it up a lot faster and we were able to get by with the little Thai we knew and gestures. When two people need to communicate, you find a way to do it! 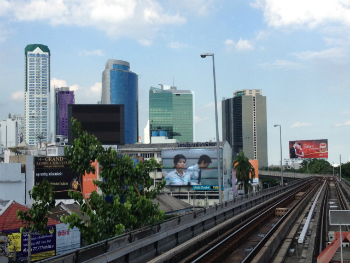 Dan: I got to Thailand with a few people that I knew a few days before the program started. We really only had one goal once we got off the plane: Eliminate the word ‘weird’ from our vocabulary. We found out pretty early that it was our initial reaction to refer to something that was unfamiliar to us as ‘weird’.

We wanted to come into the trip entirely open minded and we felt like if we compared everything to our own culture or beliefs we’d miss out on a lot. We held each other accountable and would catch ourselves when saying “The W word”, by the end of the trip, I think we accomplished it and it really opened us up to a lot of experiences that we might have been afraid to try if we called it ‘weird’.

USAC has teamed up with Chiang Mai University to offer students the chance to study abroad in Thailand! Students interested in Asian-Pacific Rim Economics, Politics, and Culture Studies will have the chance to pursue studies in those topics along with much more, including Thai language courses...