Skip to main content
My name is Dana, and I'm from the Philadelphia area. I graduated from Clemson University in 2014 with a degree in biological sciences, and I just finished my first year of medical school at Campbell University School of Osteopathic Medicine. I have a love of traveling and public health, so I knew I would have to go on a medical mission trip. I spent three of my college spring breaks abroad with FIMRC, the Foundation for International Medical Relief of Children. I'm hoping to become a pediatrician, and I would say that my time abroad with FIMRC has made me a better future physician! 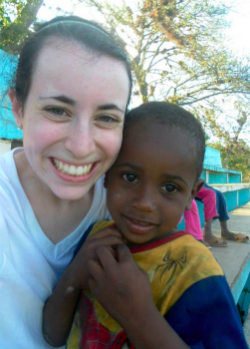 I wanted to avoid the "voluntourism" trap that so many people are talking about nowadays. I was only going to be abroad for a week, but I wanted to make sure it would positively influence the members of the community more so than myself and my resume.

FIMRC focuses on preventive medicine and sustainability, which made for a positive experience while on site, but also the comfort of knowing there would be a long-lasting impact after all the volunteers have left. We got to run a lot of patient education programs, which is so important to the people abroad who simply don't realize what aspects of their lifestyles are unhealthy.

When you educate about positive lifestyle changes, you know that's something that will be there long after you leave the country and something community members can pass to each other, which will have an even larger impact. 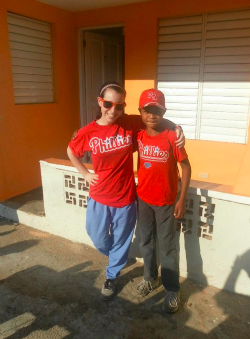 I was staying in a very rural part of the Dominican Republic. There was no cell phone service, certainly no wifi, some houses had running water while others didn't, and the electricity in the town was on occasionally and other times not. I only traveled for a week at a time, but while on site, I had no way of communicating with family or friends back home.

Showers (if taken at all) were "bucket showers" of freezing cold water. When you're in country, you completely embrace this lifestyle, but I might have been slightly more hesitant to go if I had known what I was really getting myself into!

I'm also an extremely picky eater, so I was concerned about that, but I got by on what parts of each meal I did like, and I packed a some protein bars and other snacks, which I would recommend to anyone, even if you're not picky!

We stayed mostly in the Dominican Republic, but we visited Haiti for an afternoon. I took Spanish in high school and a little in college, so I had enough to get by in the DR, especially with the kids who are very nonjudgemental and will speak slowly and clearly.

But, in Haiti, they speak Haitian Creole, of which I knew none, so there was really no way of communicating with the people there. They taught us how to say "hello" and "what's your name?" and some Haitian teenagers knew how to say "hello, beautiful woman!" in English, but that was pretty much the end of our conversation.

Earlier in the week, we had learned a little song made up of nonsense words and dance moves, and we decided to try to sing it with the kids in Haiti, even though we couldn't tell them that's what we were going to do. We started singing these silly words and doing our dance, and the kids joined right in!

Everyone was laughing, and older community members came to see what all the commotion was. More and more people joined in, and it really was an incredible experience, to be singing and dancing with these children who otherwise had no way of communicating with us. 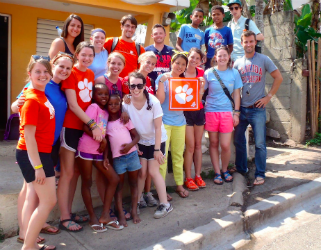 In general, the physicians and patients in developing countries allow more hands-on participation than those here at home. I was able to give vaccinations, take blood pressures, look in ears, and even write out prescriptions for patients, which obviously couldn't happen in the US.

In addition to the medical experience, though, it was really nice to be exposed to and immersed in a culture completely different from my own. Interacting with patients who don't speak the same language and don't have the educational background that many people at home have is an invaluable experience that I know will make me a better physician here in the USA.

Is there anything else you would like to add?

When you're traveling to an area where the people seem so poor and so sick, it can be easy to become discouraged and think that there's nothing you could do there to help. I often thought of an Andy Stanley quote: "what you wish you could do for all, do for one." If your time abroad can impact even just one person's life, it is completely worth it.

There is nothing more comforting than leaving an experience, feeling like a changed person, but more than that, knowing you had a positive influence on the lives of people who welcomed you into their communities so openly. There's just something about traveling abroad that makes you never want to settle in your home country!

FIMRC's Project Las Delicias, located 45 minutes outside of the capital city of San Salvador, brings medical care to a rural community of over 3,000 residents. The centrally located clinic serves as FIMRC's base within the community where primary care services, including pediatric attention...