Skip to main content
Helen Phelan was born in New York to Irish parents, moving to Ireland with her family as a teenager in 1981. From the age of six when she had her first piano lesson, her twin passions have been music and education. She has taught at the University of Limerick for over twenty years, where she was a founder member of the innovative arts academy called the Irish World Academy of Music and Dance. In that time, she has served as Associate Director to the Academy and Assistant Dean, Academic Affairs to the Faculty of Arts, Humanities and Social Sciences. She is the managing director and a singer with the early music ensemble Cantoral and, as a musical migrant herself, has a special interest in the music of new cultural communities in Ireland, working with a variety of African, Eastern European and Middle Eastern musicians. 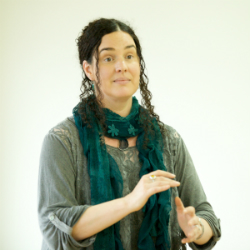 What position do you hold at Uversity? What has been your career path so far?

Helen designed and directs the core module (Creative Process and Immersive Practice) for the Uversity programme. In 2009, she was appointed programme director of a Ph.D. program in Arts Practice at the Irish World Academy. This was the first structured programme in Ireland to incorporate performance practice into doctoral study. This work has inspired the design of the core module with its combination of artistic practice and exposure, methodological exploration and theoretical discussions on creativity and arts practice research.

Did you study abroad and if so where and what inspired you to go?

In 1990, I had the opportunity to study abroad in Switzerland. I had majored in Music and German as an undergraduate student and my final project was on alternative forms of arts education. Having been educated in a university environment that prized scholarly work over performance, I was determined to learn more about other models that put artistic expression at the heart of learning.

During my study abroad year in Switzerland I studied music and pedagogy at the University of Bern and also had the chance to teach and learn at a Steiner school. The emphasis on creativity and finding your own artistic voice in the Steiner philosophy had a huge impact on my own educational philosophy.

The opportunity to study abroad is an immensely rich experience, both in terms of experiencing the place in which you study, but also because of the people you meet there. I studied in Switzerland in the immediate aftermath of the fall of the Berlin Wall - the possibility of building a peaceful, unified Europe was part of so many of the discussions I heard in our class seminars.

I also had the chance to work with the largest group of migrants in Switzerland at that time, the Tamil refugees from Sri Lanka, and what I learned from them about the importance of cultural and creative expression for people displaced from their homes has informed my work ever since.

What unique qualities does your university possess?

Uversity puts the creative process at the heart of the educational enterprise. By working in partnership with all the universities of Ireland, Uversity is connecting with an immensely rich tapestry of expertise in film, creative writing, music, dance, theatre and visual arts. Its global student body brings a wide array of cultural and creative diversity, which resonates with my own conviction that cultures are enhanced through creative encounter. Creative artists such as these students have an important role to play in creating bridges between cultures in a world where fear of the other leads to so much violence and tragedy.

It is a fascinating time for students to come and study in Ireland now. There is a wonderfully robust and passionate debate going on, about how we want to define ourselves in contemporary Ireland: politically, economically, spiritually and artistically. There is a deep engagement with our rootedness in Irish culture (preCeltic, preChristian, folkloric and historical) as well as our identity as a diasporic community, bringing our cultural values around the world, but also being enriched by what we find in our travels.

Uversity, it seems to me, has tapped into this cultural vein, inviting potential students to bring their creative journeys to Ireland and to enrich and be enriched by that encounter.

Bring your hunger for creative and professional advancement to Uversity in Ireland, and pursue our unique Master of Arts in Creative Process degree. The program is a 12-month creative and academic journey that integrates study, creative practice, and cultural immersion. It draws upon the academic...