The Alliance Française is an international network of learning institutions joined together by their love of French language and culture. Founded in 1883, operates as a private higher education establishment but is also nonprofit; they have served over half a million students from nearly 150 different countries in their existence! Alliance Française prides itself on its' programs ability to allow students to learn the language at their own pace.

Alliance Française offers French classes, spreads awareness of French and Francophone culture, and promotes cultural diversity. Programs are fundamentally based on a passion for the French language, the pursuit of excellence, listening, innovating, exchanging, and sharing. Alliance Française is recognized for their excellence and offers a quality education.

Pros:
-Other students: So much diversity and everyone is generally very nice and friendly. I met people from many different places and walks of life.
-Library: The library was nice with lots of French textbooks and materials to enhance your studying experience.
-Cultural Outings: I did not go on the outings, but there were lots of planned social activities/cultural outings and movie screenings which many of my classmates enjoyed.

Cons:
-Facilities: Housed in two old buildings. It is swelteringly hot in the summer because there is no AC. Smartboards in most of the classroom, but some of the classrooms have chalkboards. Acoustics were bad in some of the classrooms, which made the listening comprehension exercises difficult at times.
-Materials: I was not a big fan of the textbook that was used. It did not sufficiently explain the grammar points, but the teachers would supplement the textbook with other handouts and worksheets, which proved helpful.
-Admin: There were a few nice people working as admin that tried to help, but I found the majority were cranky, unhelpful, and misinformed. I had some problems with my classes (as did some of my classmates) and it was complicated to fix things.

Other:
-Teachers: Teachers are completely hit-or-miss!! In 4 months, I had a total of 6 teachers. I would say the majority were really good, but a small minority were really bad (well, 2 out of 6...)!! They were older teachers and had been at AF since the stone age. Their classes were not at all communicative and we spent the entire 4 hours listening to them talking. They gave new meaning to the word "tangent." Personally, I'm not paying 225 Euros/week to listen to someone talking for hours on end. I was really surprised that AF does not do more to ensure the consistency in quality of teaching by offering follow-up trainings, student surveys and observations.

I was at AF for a 4 month intensive (20 hr/week) course recently. Based on my experiences, I would not necessarily recommend it. It is OK for short courses with flexible timing (you can start at any time), but bad for longer courses since the student turnover was so high. The majority of the students only stayed for 2-4 weeks, which meant that the classes were constantly changing. Also, they don't seem to offer extensive staff or teacher follow-up training (though I'm not entirely sure), which means that the admin seem disorganized and misinformed while the teaching quality is not consistent (some outstanding teachers and some outstandingly bad teachers).

Many people have recommended the Sorbonne, so I plan to study there next time!

The teachers at Alliance Francaise were absolutely amazing. They pushed forward with the curriculum to ensure we were learning all that was needed to pass the final exams, but they also encouraged us to stop and smell the flowers - literally. Professors never yelled at us for missing class or coming in late -- on the contrary, they asked us what we learned about French culture in the park that day, and applauded us for practicing our French in the cafe. They were happy to take a pause in class to talk about the demonstration (strike) outside, or to answer our questions about French holidays and the like. The professors were approachable, knowledgeable and obviously passionate about spreading the French language and culture. As for my classmates, the classroom was a true melting pot, and I made amazing friends -- from Mexico, Canada, Belize, Equatorial Guinea, South Korea, China, Indonesia, Switzerland, Germany, etc. My classmates and I would often explore Paris together, going out for drinks, to see movies, etc., and some of us even rented a car one weekend and drove to the beach in Normandy. Overall - the Alliance Francaise provided great teaching, wonderful support and a fabulous place for building friendships - I highly recommend the program! 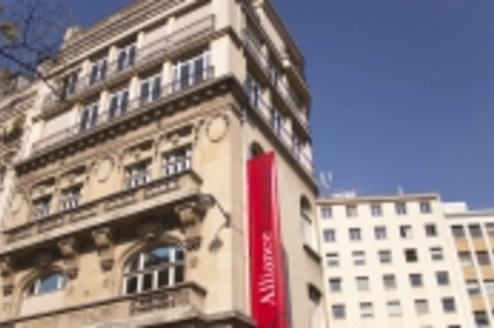 The Alliance Française in Paris has been spreading French language and...

What position do you hold at AF? What has been your career path so far?

I am the Director of the Alliance française Paris Ile-de-France, I assumed this function in different Alliances all around the world, mainly on the Latin American continent but also in Brussels. I also worked for three years in the Ministry of French Foreign Affairs. I was in charge of the issues regarding the promotion and diffusion of the French language.

I did not have the opportunity to study abroad, exchange programs were less plentiful and accessible than they are nowadays. But I encourage young people to do so. My son studied in several countries around the world, speaks several languages. These are for sure some advantages for professional opportunities in France and abroad.