Access the indigenous Science, Art and Philosophy of the Andean Civilizations

Apulaya – Center for Andean Culture is the first educational center where Andean indigenous culture is taught in a very innovative and creative way. Our success is based on the combination of high academic level and fascinating live experiences. Studying at Apulaya is a must for all students who are looking for the best updated information on Andean civilizations; for those who want to be in real and direct contact with Andean culture, while learning from indigenous teachers and specialists who are majority in our team. Also one of our program´s important goals is to prioritize students´ individual interests and needs. This is gained through the special and very flexible teaching model applied at Apulaya, that includes indigenous way of knowing and learning. We offer academic programs, semester studies, courses and seminars. 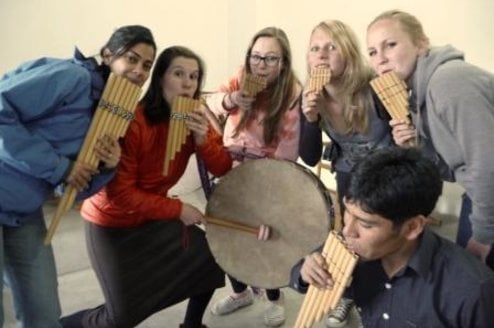 Access the indigenous Science, Art and Philosophy of the Andean...

What position do you hold at Apulaya and what has been your career path?

As co-Founder of Apulaya, I also am the co–Director and Andean Music Teacher. I graduated from the “Instituto de Música” in Cusco, Peru. In addition, I also studied Jazz in Switzerland, at the “Musik Hochschule, Fakultät III”. Once I returned back to Peru, I started to research, collect and develop Andean indigenous music and its anthropological background.

Did YOU study abroad?!

I went to study in Switzerland, because I wanted to learn Jazz and improvisation, as well as to get immersed into the Western culture. Thanks to that great experience, I began to understand how different the Andean cultures and their values are, as it opened my eyes to the fact that indigenous culture is not sufficiently taught, in Peru and abroad, and that its great wealth and diversity should be developed and transmitted to as many people as possible.