The Cape West Coast forms part of the Cape Floristic Region, one of only 25 biodiversity hotspots globally. Rich in flora and fauna, the Cape is home to a large array of endemic species that have come under pressure due to human activities influencing this delicate ecosystem.

Volunteering with CTRCI offers volunteers the opportunity to work alongside local professionals gaining practical field experience and knowledge as well as the chance to explore the beautiful city of Cape Town.

This is my first volunteer abroad experience, also an unforgettable and fun one! All our coordinators like Alice, Caitlin and Genevieve are very nice, friendly and helpful. They make this program meaningful and we learnt a lot from this program. We performed game counting, bird monitoring, camera trap setting, data collection, beach cleaning and school teaching during these 2 weeks. Langebaan is a beautiful and peaceful town. The volunteer house is very much like home, and close to the beach and supermarket. Also, I made good friends with other volunteers like Yongtong, Mengjiao and Janz. Overall, I enjoyed the whole volunteer life!

It's complicated.
On one hand I enjoyed it. Before departure, there is lots of information provided to get things ready and what to expect in South Africa, they agreed to pick me up at the airport even though I would arrive later than their pick-up time. On the day I arrived, I was 4/5 hours late, and they were still waiting for me, for which I really appreciated. In the later two weeks of the program, the project manager showed great experience in leading the project and I finally felt I was doing something useful to the community. I am not saying the first two weeks were wasted, I just felt those two weeks were not well organized, activities were random, although the staff were working hard to keep us occupied. I believed it's because this's a new program and things were not set up efficiently yet. And also because it's new, there were not many volunteers there. I was lucky to have 3 other volunteers with me at that period of time, but they won't have more people for a while, some went there just to find out s/he was the only one. it's harder to get things done and from time to time, you got so bored.
Overall, I like it, but if you want a full experience, wait a while.

I had a wonderful time in Langebaan! We were based in a beautiful house in a nice and quiet neighborhood one street away from the beach. The house has everything you need, perfectly clean bathroom and showers, big and comfy beds and even a swimming pool and garden. Everyday has been different, from teaching children about water to bird surveys or plant identification and beach clean ups I never got bored and learnt new skills everyday. The staff there was amazing, hopefully Alice and Genevieve will still be there if I can go back! I already miss these winter nights by the fire, amazing memories shared with all the other volunteers. The location is also perfect to go on week end trips down to Cape Town and Alice (the manager) was always helping us to get a ride down and back up to Langebaan.

I had a truly amazing time and would recommend it to anyone who wants to learn about conservation, discover South Africa and meet amazing people.

What would you improve about this program?
The program is already very good, it's also just a few month old but will only get better with time!
Displaying 1 - 1 of 1 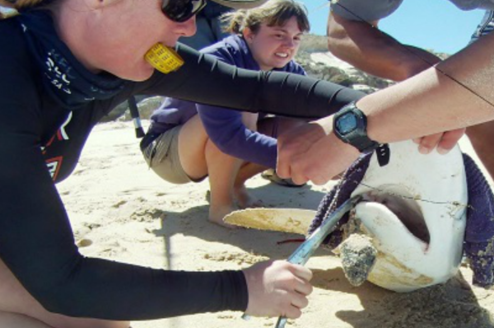 Volunteer in South Africa with CTRCI