**THIS PROGRAM IS NO LONGER RUNNING** 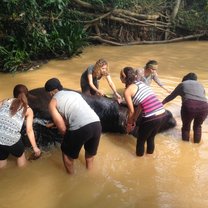 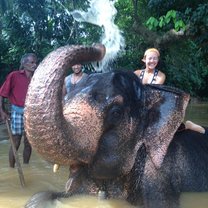 I loved it! in the mornings, before having breakfast, we went and collected food for our elephant.
After eating and resting, we went to the poo paper factory (wich helps to pay for the elephant's food) and helped there. At 12 they had like a elephant parade every day.
Finally in the afternoon we had the best part, ELEPHANT BATHING! :)
It was really fun and we got to "play" with the elephant after.
I personally wouldn´t go for more than one week, because is really fun, but I wouldn't consider it volunteering.
Anyway I had an amazing time with my new vounteer friends there (is better to go with a group).

What would you improve about this program?
Maybe the volunteers could do more in the poo paper factory or in the actual orphanage.

My second night the man in charge of the volunteers (Charith Abeynayake) tried to kiss me and followed me into my room as I fled, I had to push him out of my doorstep. The following day he accused me of lying. After this incident he acted really hostile towards me.

I paid a lot of money and I was sad to see that none of it went to the orphanage, but for accomodation and Chariths pocket.

He also went through my Facebook page, and obviously translated things I wrote to my friends in my native tounge, since it's a language he does not speak, and ordered me to erase or change things that I wrote to my friends. He also told me not to talk to visitors at the orphanage.

Let me go through the things he claims that you get to do:
- Clean enclosures: Yes.
- Bathing elephants: No, you get to watch them from a restaurant with the other tourists, which frankly became a bit boring after a week. To actually bathe an elephant he took you to a private owned elephant at another part of the village and you had to pay the owner.
- Perform basic daily health check: No, none whatsoever.
- Feed the elephants: No. If you wanted to you had to bribe the mahuts and you got to give them one bottle at bottle feeding time with other tourists.
- Harvesting food from jungle: No. Since Charith was hostile towards me he refused to let me do this since he accused me of being fat, lazy and weak (I am in good shape and work out at least four days a week).
- Keep site clean and tidy: Other than cleaning stables for about two hours a day no.
- Teaching english for kids: No.
- Attend lecture series about elephants: No.

He also claims to be there for you 24/7 but he was often drunk at night and overslept.

I would never in my life recommend this to anyone since it's really unsafe when the man supposed to take care of you and keep you safe does the complete opposite.

I am sorry to say I had a terrible time at this program.
All we were allowed to do was clean the stables and 2 days out of 3 weeks I got to follow the vet around and see what he does. Any other activity I wanted to take part in some one asked me to pay extra, usually the mahouts.
I also was not very impressed with the standard of care. I appreciate they have lots of bulls and safety is their number one priority but I think there is a lot of room for improvement.
There was no support from some one like a volunteer coordinator and I will never go back to this project.
You do get plenty of free time but if that is what you want you can just do a tour of Sri Lanka and visit the sanctuary for a day.
I must add that my stay was 3.5 years a go so maybe things have improved. I hope so.

We are sorry that you haven't had a good experience while your stay at Pinnawala elephant orphanage. Quality of the project depends on the company which you come to volunteer. There are some companies which charges a big fee and still the volunteers are not satisfied.
You can visit our company facebook page and see how our volunteers satisfied and what they did while their stay at pinnawala.
www.facebook.com/ElephantVolunteerPinnawala

Your main duties will be:
Help with the cleaning of the elephant enclosures
Participating in bathing elephants
Learning all about these gentle giants, and performing basic daily health checks on the elephants.
You'll also have to feed the elephants
harvesting food for the elephants from the jungle
Keep the project site clean and tidy
Collecting the elephants’ dung and food waste for composting
Teaching English for poor kids and monks
Attend lecture series about Asian elephants
This is the difference of our elephant volunteer project to other company projects and our coordinator is always behind you there to guide you and help you 24/7.

By Pinnawala Elephant Orphanage on November 5, 2014

I spent 4 weeks at the Elephant Orphanage, and it was incredible! The people there were so friendly and welcoming.

The first week there I was very nervous. After a few days I got to know all the other volunteers and felt so much better. The staff who were helping us out went out of their way to make us feel at home. The home we stayed in was lovely, and we felt very safe there.

The orphanage itself was amazing! Being that close to them was such an honour (although the poo was smelly, you got used to it after a few days!).

We began early in the morning, cleaning out the sheds which took about 2 hours. Then we headed back to the house for a shower (believe me, a cold shower is just what the doctor orders after 2 hours of poo shovelling). Then we had lunch, and we had about an hour of free time (some of us napped, played a board game or read books). Then we went back to the orphanage just in time to see the elephants go down to the river. You had a choice of what to do while you were there. There was a small cafe you could get a beer or soft drink from, or if you wanted you could get into the river and help out washing the elephants. There were also loads of shops you could look at in the area. Then we headed into town for shopping or to use the internet cafe, then headed back to the house at your own leisure. We had dinner, then had more free time.

At the weekends, we organised trips to different sites around sri lanka (eg the beach, cultural triange, white water rafting) which was a really fantastic way to see more of the country.

This organization no longer has any active programs. Visit our homepage to continue your search.