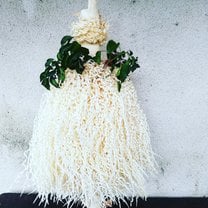 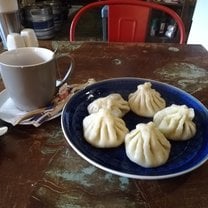 Teach abroad in Georgia with the Teach and Learn with Georgia (TLG) program! TLG is sponsored by the Ministry of Education and Science of Georgia to promote English language skills and cultural interactions. TLG is a unique educational reform program, especially because of Georgia's post-Soviet government, nothing like this has ever been done before in Georgia. Share your culture and your language with eager Georgian students!

The Ministry of Education and Science of Georgia hopes to increase the use of the English language in Georgia through the help of fluent English teachers, create new teaching techniques, promote the exchange of cultures, and improve the education system of Georgia.

I have had some of the best time of my life living and traveling in this country. I have had the chance to experience their wonderful hospitality, cuisine, music and dances.
This experience can be both rewarding and frustrating at times but the good however outweighs the bad.
The lack of interest in some students can be discouraging, but I do my best to encourage them to want to learn more be it with the English club or games we play in the classroom.
This program offers a unique experience.

What would you improve about this program?
The communication between the TLG team and the volunteers.

I was in the summer 2011 group, and after 9 of us were left with no contact at Tbilisi airport,we finally made our way to Kutaisi-I had not slept in 30 - yes 30- hours,then they gave us 2 hours to sleep and then I and my group were supposed to meet with the Minister of Education-and no one awakened me; staff was in general like this, somewhat of a fiasco. They gave minimal Kartuli(Georgian)language lessons and the cultural awareness was redundant for many who had as myself lived-taught throughout the world already.

Staff were much less world - teaching - language expertise aware than many participants.They were really bothersome to say the least, unprofessional in not a few ways.

That said I had a SUPER GOOD family;I speak Russian and I had no trouble anytime getting around and spoke at home in Russian-my father was a former mayor and mother, maths teacher. I STILL am close to them and love them.

I know the TLG people were trying to do something good but I think all of us, at least the people in the program I knew-consider the high turnover staffers about a 2 on a scale of 1 to 10.

Nowadays I know the president of the country is not "Mischa Saakashvili", but Ivanishvili who favours the way things used to be before Georgia took independence. So I could not say what augurs for the possibilities of the program today. I would say if a person speaks Russian (I am native speaker of American English) then it will go very easily, just play along with the "matriculation", simplistic as it may be- then get with your family.

I found the people 99 percent of everyone in Sakhartvelo(Georgia) GREAT. Only one taxi driver, a Romansch Tsigan(Gypsy) tried to rip me off in Batumi once but otherwise I can't think of one bad person or experience as a trainer there.I got burned out on cheese bread but to say it tastes exquisite is to say the least. Other foods were good; especially sauces which are truly gourmand. I tend to vegetarian which they sort of chuckled at but overall the food was good.

Yes, and I learned to make wine and harvested grapes that autumn; we harvested just part of the crop and it was 300 kilos;it is a beautiful memory.And don't forget the cha cha (pure distilled alcohol). I really didn't drink but a tiny glass but it has a punch!

I cannot tell you how beautiful Adjara region is.We're talking picture postcard beauty.I will return, my own parents died years ago and I consider the family there my mother and father, for real and I can stay-live there anytime. People do not exaggerate when the speak of Georgians' hospitality.

If I were running the program I would get rid of 90 percent of the staff-training and have just a couple of professional, seasoned liaisons to run the show.

I would recommend this only to certain individuals. The groups have had fresh out of college kids who treat it like a frat party on spring break. It is NOT and they are a freakin' embarrassment to the states(where I am from).If a person has language(s), and teaching credentials(I mean specifically ESL Certs as I have ) - then by all means go. Otherwise I'd say probably no to the average person merely seeking fun and travel.

Again I love my family there and I will return and TLG made it possible - I am grateful to them for that.

What would you improve about this program?
Administration, absolutely.
Read my full story

Georgia has been a wonderful experience. The people are very friendly and welcoming. Most of the villages and schools are just excited that they have an English speaker and are very cooperative. Georgia has its share of discomforts: most volunteers are placed in smaller villages (mine has about 1000 people); bathroom facilities are low tech, which means showers once a week and sometimes Turkish toilets; schools are limited in what materials they have, expect little to no technology used in classrooms. All of that said, the people more than make up for these minor discomforts! Everybody in my village talks to me when we meet. I've received three bouquets of flowers this week already and I got more apples and nuts than I could eat during the fall. The teachers in my school got some useful phrases translated and hung them in our coffee room. And it's always great to hear kids improve their reading and become more confident. The little boys I live with delight in using their English, like yelling from the bathroom "I want toilet paper!" to saying "Let's go!" as we leave the house. Even now they are hovering around, asking me what I'm doing. I would not trade my time in Georgia for anything.

A note about Reach to Teach. Compared to the other volunteers in my orientation group, I felt very prepared regarding all paperwork (medical documentation, contracts, etc.) I had everything I needed with me.

What would you improve about this program?
Orientation is only a week which, in many respects, is enough. However, it's hard to go into a country with only one week of language training.
Read my full story

I lived with a great family in a nice house. My town was not too far from Tbilisi, which I enjoyed. Being able to escape easily was pretty essential, as things to do in the town were very limited.
My teaching experience did not give me much teaching experience, though. Not very much was expected of me in the classroom which at first was a relief because I had had no prior experience, but I wish I had come away feeling more comfortable in front of a class. My co-teachers and principal were very nice and welcoming and did their best to make me comfortable.
The 11th group, which arrived at the end of January 2011, was a great group. I am still in contact with some of them, and there was usually something to do on a weekend. My stipend was enough to visit Tbilisi or somewhere else around the country almost every weekend.

I lived with a host family. Dad was a municipal leader, mom a teacher at my school, sister my student and grandma was grandma. Not my preference, will not do this again; however, they treated me like family from day 1 and took the best care of me that they knew how to do.
My school, like most, is a horrible building. The faculty and staff were nice to me, but couldn't communicate and weren't helpful. My co-teachers were polar opposites. The kids were magnificent! 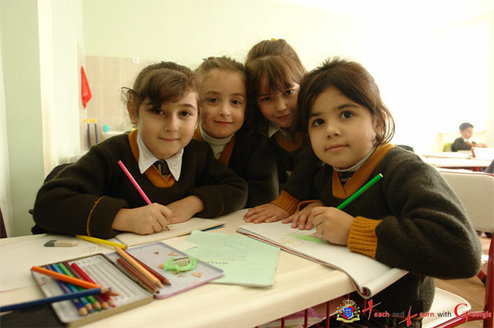 Teach and Learn with Georgia

Join Teach and Learn with Georgia to teach English and make a...

Program
Teach and Learn with Georgia

Why did you decide to teach abroad with Teach and Learn in Georgia?

I decided to teach abroad with TLG for several reasons. First, there are less requirements than other programs which made TLG seem more relaxed. Second, I hadn't seen many other programs in that area, Georgia was different and unique. Finally, Georgia was a country that I didn't know much about, except for its ancient history when connected with Greece. It's been fun learning more about their history.

There have been many things that have made this experience special for me, mostly having to do with the people I encounter every day. One thing which always makes me laugh is how, anytime we have a school event, the kids line up to have a picture with me. It makes me feel like a tourist attraction! Another thing I love about Georgia is how interested the people are in foreigners. Anytime I travel or go shopping or do anything, as soon as they find out I'm not Georgian, the news passes to everybody else in the area. Then they talk to me like they know me and help me find what I want and tell me all about their families.

Tell us a little about how Teach and Learn with Georgia started.

In January 2010, the President of Georgia announced the current year as the year of education. Ongoing obstacles were addressed and extensive educational reforms were launched— Teach and Learn with Georgia (TLG) being one of the most ambitious reform programs to tackle educational development. Under the Ministry of Education and Science of Georgia (MES), TLG was designed to bring English speakers to volunteer teaching English in public schools throughout the country with the goal of improving English language skills of Georgian students and teachers alike, while fostering cultural exchange.

As a post-Soviet country, Georgia is at a turning point in its history. For centuries, while other countries and cultures were globalizing, Georgia’s borders were closed to the outside world. Now, as a sovereign state, Georgia has the opportunity to integrate with the rest of the world—linguistically and culturally. This is what makes TLG a particularly unique program. Bringing English speakers into classrooms increases English language proficiency throughout the country, which is essential to Georgia’s ability to assimilate into the modern world.

How many volunteers has the TLG program had?