The program begins online, before students travel to South America to continue their studies at the Instituto de Literatura Hispanoamericana, which forms part of the University of Buenos Aires. The students then move on to the Iguazú Falls and Corrientes.

As they traverse the capital city, the sub-tropical rainforest of the northern border of Argentina and the seven peninsulas of Corrientes, students acquire a broad knowledge of Argentina, a country influenced by the confluence of various indigenous and immigrant populations, which continues to play an important role in shaping the socio-political landscape of Latin America. 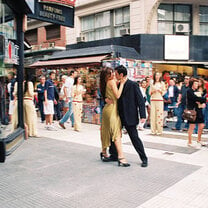 At St. John’s, we strive to create new, innovative programs that encourage students to study and live outside the U.S. And our amazing students hear the call—roughly 30% study abroad, handily outpacing the national average! Imagine sitting outside the Coliseum under the sunny Italian sky, drawing a piece of history as part of your “Italian... END_OF_DOCUMENT_TOKEN_TO_BE_REPLACED