Volunteer with Blue Ventures in the unique natural paradise of Atauro island in Timor-Leste and contribute to critical marine conservation in a country at the heart of the Coral Triangle, home to the highest diversity of marine life on earth.

The waters of Timor-Leste are a biodiversity hotspot and a global marine conservation priority, yet data on the status of the marine ecosystem is severely lacking. Blue Ventures’ volunteers assist our team of scientists with the collection of marine inventory data completing research dives in previously unsurveyed waters.

Expedition volunteers are at the heart of everything we do and we’d love to have you join us!

“It was the best experience money can buy and I want to go back in time to do it again.” Harrison Root, Timor-Leste volunteer

Blue Ventures Timor-Leste is incredibly unique in that they are the only, to my knowledge and at the time of my expedition number 5, research based diving program on the island of Ataúro, Timor-Leste (named the most marine biodiverse place on the planet by Conservation International). The diving and volunteer training programs in Benthic, and Fish species are detailed enough to get you really excited about the research being done but also enough of an overview that you have the last two weeks to assist with the research. Unfortunately because you must be trained on site, you need at least two expeditions on site to have a significant contribution to the wealth of data being collected on the marine and seagrass habitats. The program is still in its developing stages which makes it possible for the volunteers to have a stronger impact in shaping the goals of their projects. I hope Blue Ventures recognizes this potential and does more than just "listen" to volunteers ideas but also implement them if they think they would be effective. Lastly I will share the most incredible part of my experience that encapsulates what I believe to make Blue Ventures work so important. The people of Ataúro, especially in the mountains, are mainly subsistence farmers and fishermen/women, with any surplus sold in Beloi or Vila (two local villages) market on Saturdays. The locals had net and spearfished for as long as they can remember as a means of livelihood. These livelihoods are now being threatened by international problems like global warming, and coral bleaching related to this and destructive fishing practices. Blue Ventures was trying to establish and educate on LMMA (Locally Managed Marine Areas) and FADs (Fish Aggregation Devices) that would help re-establish and make more abundant local fish stocks. Also stressed was the importance of seagrass as a nursery ground for all young fish before moving into the coral reef environment. A big part of BV's mission seems to be involving locals and while I was there they had an idea to employ and train local seagrass monitors from the surrounding village to help determine total seagrass cover and types of seagrass which can be correlated with fish health and degradation can be measured over time. Locals were guarded at first but once BV's Timorese dive staff started explaining the concept people seemed eager to sign up. Soon about 20 signatures of people from both sides of the small 25km island had been collected. When we were about to close up our stall a deaf man came up and couldn't express himself in words but seemed interested. Again the local dive staff explained the idea and he couldn't have been quicker to sign up! It was amazing to see the unity between "Malae" (Tetum word for foreigner and) and locals on issues of conservation and the opportunities that were beginning to develop in a globally under-recognized field. I would recommend this trip for anyone interested in research diving, and learning the history of the third most recently independent country in the world.

What would you improve about this program?
More extensive involvement with local communities such as village forums and educational sessions with schools (primary through high school) and adults would have made the program more impactful. While I was there they were still in the stages of setting these up so I don't fault them for this but something bi-weekly would engage the community more. Also, the once a week and sometimes not even that, school program wasn't enough to get the kids to really know you so striking a better balance between the research and community (currently research heavy) would be the logical next step.
Did you find this review helpful?
Vote up! 0
Vote down! 0

Overall a very positive experience. I have been learning a lot on coral, fish families, and the people in Timor Leste are very warm and welcoming. The staff is very professional and fun, which makes it a very nice experience. Even more that there is little to do at night on the island, it is pretty isolated, but this s part of the experience as well. The conditions we were living in, staying st Barry's lodge were excellent. Way better than in any other volunteer expedition I have done.
Would recommend it to well-traveled people and people interested in increasing their knowledge on marine science. Diving is good, the diversity is excellent and coral reefs as well. No 'big' fish though. As for every expedition with Blue Venture they are very conservative on dive profile. So do not expect deep dives or very long dives. Still good for most of the people.

I had a fantastic time on the inaugural ‘discovery’ expedition in March/April this year and wish I could have stayed longer. Out of the 8 of us volunteers, there’s 4 of us who have kept in regular contact and want to reunite next year for more diving.

The project is less than a year old and is constantly evolving. Every week was a bit different when we were there.

Generally, all diving is done pre-midday. This is because it is so remote and in case of any accidents it allows for an evac. To Darwin during daylight hours. We did one or two dives a day, 5-6 days a week. There’s a roster done up each night of who is boat marshal and shore marshal for the next day and who is doing what underwater. All volunteers take turns in doing both non-diving roles so it evens out that everyone gets about the same number of dives during the expedition.

In the afternoon it’s classroom learning taken by Sean and/or Jen, the two marine scientists of the expedition. You’ll learn to ID the benthic (corals etc) and fish and there’s tests both on land and in the water later in the week. This coincides with point-outs under water in the mornings. After the first couple of weeks of learning you’ll progress to survey work include PIT surveys using a tape measure and camera/GoPro and slate to record benthic and fish abundance/species surveys depending on how good you get at fish ID. We also did some snorkeling surveys for sea grass and fish in the afternoons.

When I went I had done about 70 dives and PADI rescue. Others had done between 30 and 200 dives and were various stages between Open Water and Rescue. Two people did their Advanced while there with Greg the co-coordinator, who is an amazing instructor (who has spent a total of 2.5 years of his 40 or so years underwater!). You have to be Advanced level before you can do surveys because there are quite a few sites with fairly strong currents.

The team works very closely with the local community and several of the BV crew are Timorese. The place we stayed ‘Barry’s Place’ is a tiny little eco-resort which is run by an Aussie guy (Barry) and his Timorese wife Lena. It’s very basic but that’s its charm. We stayed in twin share thatched rooms right on the beach front and the sunrises from your bed were worth it alone!

On Sundays there is no diving and we had time to take a tuktuk down to a nearby village where there were a few places to buy locally made souvenirs. We also did a hike over to the other side of Atauro island to a place Mario owns. Mario is an Atauro local who works for Barry and also for World Fish. He is very instrumental in the links between BV and the community, as is Barry himself, who is fluent in Tetum, the local language.

The island of Atauro itself is very beautiful and mostly untouched. We hiked across to the other side through rainforest. Its very un-developed. Only 25km long.

Overall, it is a VERY fun experience and I am looking to go back again next year if possible.

We have a team of dedicated researchers and volunteers who study all aspects of the marine environment.

Our expeditions offer an opportunity of a lifetime and attract volunteers from all backgrounds and ages. Volunteers contribute to our...

END_OF_DOCUMENT_TOKEN_TO_BE_REPLACED 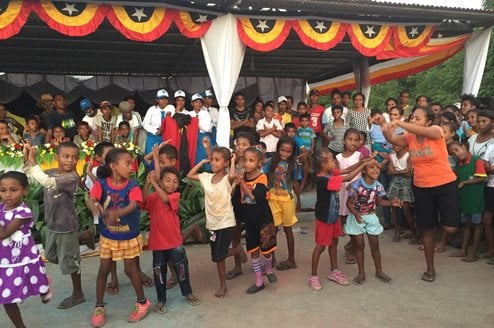