The Pacific Divers internship program in the Cook Islands is designed for all skill levels and backgrounds, even if you're never dived before! The program operates on a rolling basis and can be started anytime for new interns. This divemaster internship is a great way to get you career started in diving and meet new people. Visit the Pacific Divers website to lean more!

My experience with Pacific Divers was one of the highlights of my life thus far. To this day the back of my mind is plotting a plan to return to Rarotonga to live permanently.

I researched for a long time before applying to do my internship with Pacific Divers. The owner, Steve, helped me arrange my housing and one of the instructors was there to pick me up from the airport in the middle of the night. I was in a shared house with other interns right down the street from the shop.

I found the staff at Pacific Divers knowledgeable and highly professional. The shop was a relaxed environment but we still worked hard. Duties included helping in all aspects of the business. I worked with guests at the shop, on the boat, and in the ocean. I became very comfortable assisting divers, and could answer questions and solve problems with confidence. The shop was busy, tourists were mostly from New Zealand - they are friendly, kind, and a pleasure to take diving.

You are given plenty of opportunities to dive, and the diving is stunning! Visibility is off the charts, and there was rarely a dive that I did not encounter something to get excited about. The shop was very supportive of my interest in marine biology and environmental stewardship. I was able to learn the majority of the local species, any guests with questions about marine life got pointed in my direction. Steve is very active in environmental issues on the island. We took part in a reef clean-up and a lagoon education day while I was there.

The training was thorough and hands on. The instructors were helpful and supportive. They were flexible with their training schedule when I had personal issues that arose and had to take time out of the water. I have worked as a Divemaster since Pacific Divers and feel I gained plenty of experience to stand my ground in a competitive industry. I since have done more specialty training on the west coast of Canada and will be starting my Instructor Development Course this week!

Living on Rarotonga is a lifestyle most only get to dream about - a tropical paradise with friendly warm hearted people. I found the island extremely safe and full of culture and community. I knew my neighbours well and they were always bringing me fresh fruits. In my free time I would visit the market, go for hikes, or simply relax on the beach. Some interns joined sports teams or tried out kite boarding and other activities. Small restaurants and bars dot the island and pizza at Trader Jacks, dancing at Whatever Bar, and karaoke Wednesdays were some of our nightly activities.

I made amazing friends with staff and fellow interns. Most of which I am still in contact with almost 3 years later. Two of those friends have now gotten married (a wedding I most definitely did not miss)... so don’t be surprised if you find love on the island! Everyone is spread out across the globe and still very active divers. As a bonus, I now have dive connections all over the world!

I would highly recommend this internship to individuals with outgoing personalities, who are passionate team players and put their heart into everything they do. I have stayed in touch with Steve and Pacific Divers over the past few years, and will be returning very soon for a visit!

Choosing to do a six month internship at Pacific Divers in Rarotonga was definitely the best decision I could have made during my gap year of 2012.
Fresh out of home/high school it took me a few alienating weeks to settle into the routine at the shop and on the boat, but not only have I walked away with my DM; I've also walked away knowing that I've learned more than I could have hoped for, SCUBA related or otherwise. There was always something new to learn with the boss man Steve and the other various mentors I discovered during my stay.
Diving with fellow work mates on an almost daily basis, meeting people from all around the world, and ofcourse after 6 months in a far smaller social environment, I left with friendships outside of shop life too.
It's easy to develop some truly memorable friendships there and I had some amazing times during my internship. All of which I've gained, I feel, a vast amount of knowledge from.

What would you improve about this program?
Perhaps a new van? :P
Read my full story

A lot of my Dive Master internship at Pacific Divers consisted of sitting in the shop, sitting on the boat and cleaning. I wasn't allowed to learn on the job. It was more of a course that you pay for by working than an internship. The living conditions are ok, nothing flash but expensive compared to staying elsewhere. Social scene is good. I was lucky that I learned a lot from one of the instructors (unofficially), because Steve the owner likes to teach the DM students and he's a bit (sorry I probably can't say on here). One word of warning, no matter how quickly you do the course you will not be signed off until your last day working. So if it's not for you, decide early on, or you end up stuck like me. By the end I really hated the owner of Pacific Divers and I had stay to get my certification.

I wanted to learn to be a PADI Divemaster with the support of a professional team. How wrong was I to book an an internship with these guys. The owner spends most days either drunk or shouting at the staff in particular any female students. It's a really unfriendly atmosphere.

Why did you decide to participate in the Pacific Divers internship program in the Cook Islands? 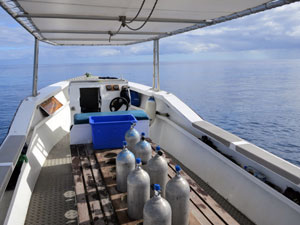 Mitchell: Fresh out of high school, I was already planning on taking a gap year before heading into uni. I had actually left school before the end of the year exams and was starting to regret throwing away those points. Over Christmas, my Uncle's friend, Franz Smith, was around a lot. He was a "Marine Conservation Planning Post-Doctoral Fellow" and was telling me about the time he was spending in the Galapagos Islands and about SCUBA diving itself. Although I had never truly thought about anything involving the ocean or SCUBA as a path to follow, he definitely put a few ideas into my head as to what I wanted to do during the gap year I was struggling to plan.

I did my Open Water and Advanced Open Water at home in Auckland through Dive HQ and then thought about how I could include SCUBA (which I was loving) into the remaining months of 2012. If memory serves it right, it was Franz who gave me the contact to ALMP, the Aitutaki Lagoon Monitoring Project. I followed this up and contacted those behind it, one of whom was Steve Lyons, the manager of Pacific Divers. Unfortunately, the Monitoring Project fell through but luckily Steve emailed me the details of an internship program he runs at Pacific Divers and let me know how I could volunteer or tag along with PICI - Pacific Islands Conservation Initiative - seeing that I was quite keen on volunteer work. Mitchell: Within the first 2 weeks into my internship, I traveled to Mangaia with Jess Cramp and was lucky enough to tag along to different meetings with the Island Council and listen in on the classes she held at Mangaia School. She was there promoting the Cook Islands Shark Sanctuary, which has recently been declared, and also the threats shark fining has to the dwindling numbers of endangered shark species and to the Cook Island culture. This in itself was very rewarding and meant alot to me and has really opened my eyes in regard to marine life, conservation, sharks and the culture of the Pacific.

Returning to Rarotonga after a week there, I was back to my internship. I've already stated about how much I learned during my 6 months there. What made this learning experience unique (atleast to me) came down to several factors. The work was hard at times and yes, there were times between padi courses where you feel like a slave, but you are a slave in paradise. I was in the water more often than not, and the heat, the lagoon, the people, and the good times all made whatever strenuous days I had worthwhile. I also got my Dive Masters out of the whole experience, taking me a step away from starting my Instructors Course which I know will greatly benefit me in the years to come. 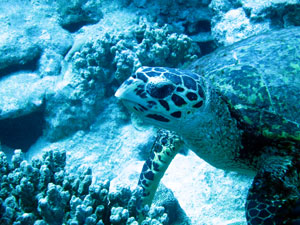 Towards the end of my internship, the opportunity to get to Aitutaki became available again. With another member of PICI, Phil Bradshaw, I made my way to Aitutaki, a very popular tourist destination, and for good reason. I was there for 6 weeks! Phil's purpose there was to survey every shore line on the island for suitable nesting grounds for Green or Hawksbill sea turtles (something which has never been done before), educate students on the island about sea turtles at various schools, and conduct meetings with many members of Aitutaki council and public. This was an amazing thing to be involved with; It was hands on volunteer work and on a few occasions I got to locate and excavate different Green turtle nests. While I was there I was also a lot more involved with the schools which I found to be alot of fun.

Mitchell: I've often been told that it's not what you know, it's who you know. And throughout my 6 month internship at Pacific Divers, I was given the opportunity to volunteer, learn, teach, dig, work and dive alongside people like Jess, Phil, Steve and many others. This has undoubtedly impacted my future. I'm currently in the process of applying to James Cook University in Cairns with the (regrettably high) hopes of studying Marine Biology - something I never would have planned to do if not for the advice from various people I met. Although there are several obstacles I put in my own way during high school are currently showing themselves, the time I've spent in Rarotonga with Pacific Divers and PICI has given me the passion to do what it takes to get to where I want to be. 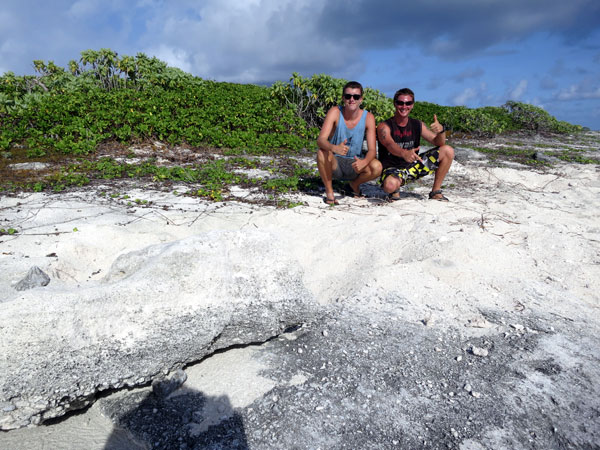 Pacific Divers is one of the very few premier diving instruction organizations based in the Cook Islands, on the eastern end of Rarotonga. Divers will develop skills by the famous Muri Beach in the popular Muri Beach area, located by many tourist spots. Visit the Pacific Divers website to learn more about current divemaster internships available in... 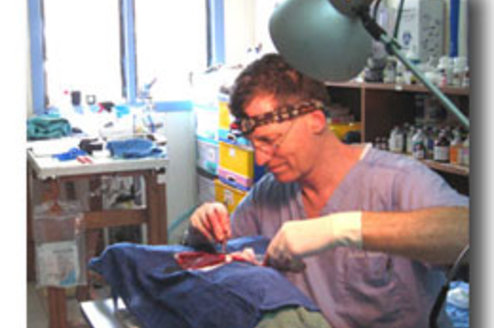 Save to Wishlist
Global Nomadic

Veterinary Internship in the Cook Islands

Global Nomadic works with a local organization in Rarotonga, Cook...