Skip to main content
She's a student living in Kenya and she wants a major in biology. she is originally from France, but she was born in Spain and has never lived in France. She has traveled all over the world and lived in 6 different countries. 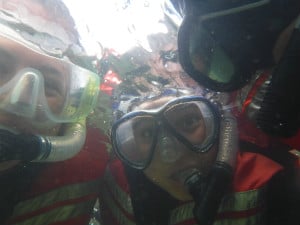 I picked Broadreach because out of all my options it seemed like the most reliable and the summer camp were I could have the most fun as well as learn a great deal.

I always tell them to go for it, traveling for me is always an amazing trip!

The jet lag I would say, I am used to traveling all around the world, alone or with my family, but directly when I arrived my brain was still in the early AM while I was already in the afternoon and it took about 8 or 9 days for my brain to get on track :)

Probably all our performances we had during kayaking. sometimes when some people were in a down mood, we would all start singing it was very fun we had a lot of high school musical, and I even had a friend who sung opera professionally.

Also making pizza at the research station and all the animals we had the privilege of seeing, including swimming with the bioluminescent krill!

Bring lots of duct tape! I was the only one who brought duct tape and very one really needed it, even my teacher at one point because her bag broke. Also do not shop for camping stuff in Kenya. Throughout the whole trip, I had to make do with a car shield as a camping mat so yes, be prepared.

I came on this trip exclusively because I wanted to be sure on what I wanted to study in the future and it gave me that assurance. I now know that I want to be a marine biologist or at least definitely a biologist and it has enlightened me in so many ways.

Learn about marine mammals in Canada's British Columbia with Broadreach. This 22 day program for high school students in 10-11 grade combines seminars with out-at-sea excursions alongside professional researchers. There is no better place than British Columbia to observe the world's most majestic...