Tell us a little about yourself and your trip.

Jon: I was born in Poole, UK, but we moved to Stafford when I was little, which is where I grew up. I have lived in London for the last two years. I have several occupations: Full time student, studying BA Philosophy at Heythrop College, due to graduate in June 2013; Youth Development Officer, Little Hearts Matter Mentor to a young offender; Supporting Others through Volunteer Action
Helpine and Online Counselor, Childline (I also mentor new volunteers on their first few shifts, and once a month I provide support to the supervisors on busy shifts, listening in to calls to assess risk and support counselors).

Why did you decide to volunteer with AV in South Africa?

Jon: I’ve always had a strong desire to get out and see the world, preferably whilst I’m still young. “If I say I’m going to do something, I do it.” This is the mantra that I try my best to live by, pushing myself to seize all of the opportunities that life throws at me. There were two clear reasons that I wanted to go abroad and volunteer. Firstly, I felt (and still feel) a responsibility to help other people that had, through no fault of their own, been born into poverty. Secondly, and more selfishly, I wanted to ‘see the world’. I had to witness the awe-inspiring African landscapes and rural village huts; I had to live them. 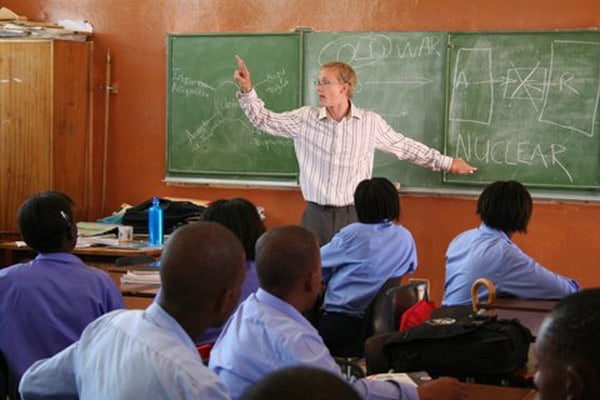 People that are looking to take a year abroad have the luxury of choosing between hundreds of competitors. I researched several volunteer companies, and AV immediately appealed to me as the stand out candidate. Firstly, their prices seemed reasonable, especially considering what was included in the ‘package’. I knew that with a bit of hard work over the summer and autumn, I could raise the money. I didn’t need to do any fundraising in the end, meaning that I could pride myself on funding the trip by dint of hard work. AV also achieved that difficult cohesion of professionalism and friendliness. If you are looking to hand a couple of thousand pounds over to a company, you don’t want to see a stock template website with comic sans font. On the other hand, you would like a personal service, that makes you feel like you’re going to be in charge of your own experience. The office called me to arrange an interview at my school, and invited my mum along – major brownie points with mother. Then at the interview, they talked almost entirely to me – major brownie points with me!

The interview was what clinched it for me (and mum!). As I was still at 6th form at this point, I was not used to being talked to like an adult. I was more than satisfied with the balance of hands on voluntary work and once-in-a-lifetime activities/travelling. They took the time to speak to me at length about my interests and personality, giving me the feeling that they really cared about me and my trip. Their commitment to safety of volunteers versus authentic experience was tested in the weeks that I was supposed to depart on my trip. Originally set to spend four months in Kenya, the country erupted into riots and mass killings, and throughout January teetered on the brink of civil war. They pulled the plug, and I remember being hugely disappointed. I knew that they would find a different placement for me, but I was ready to leave now. The staff at AV could sympathise, but weren’t prepared to put us at such unnecessary risk.

The disappointment soon subsided, as AV sent me through 11 new projects to choose from, all across the world. Although I had set my sights on Africa, I was tempted by conservation work and scuba diving in Thailand, or teaching in an isolated village in the Indian hills. I eventually opted for South Africa, though, a new project. The staff thought that this would be new and challenging, and that my personality would suit such a trip. I think that they were right.

Jon: I started off quite strongly, managing to crawl out of bed just before dawn to go for a jog with my new Kiwi friend Al. Once the sun climbed up into the sky it was far too hot to run, so we had to start early. By the time I got back the rest of the house had got up and made breakfast and their lunch for the day. If I was lucky one of my wonderful new housemates might have made me some peanut butter sandwiches. The water and electricity are pretty reliable in South Africa, so having a wash in the morning was normally pretty pleasant.

Our nine strong AV group was split into three groups of three, with each group going to a different school. Jenny, Sophie and I had been placed in the nursery with the little ones, and after a walk through the township, waving a few a hellos, we began work. The language barrier presented a bit of a problem, as the children spoke mostly Afrikaans and Sesotho. Although we were able to sing along to a few of the songs, we never really picked up these languages, but we were able to communicate with the children through play. We’d also teach the odd lesson, concentrating on the English alphabet, which was surprisingly hard work.

The school day finished shortly after lunch time, as the day starts earlier. After we had finished, we would travel home and do some lesson plans and make some flash cards. The rest of the group would come home in this time, and we’d all pile into our living room to work together and chat.

As we became a bit more established, we told the local school children that we could provide football training, and these proved very popular. We would train for one or two hours, and this was a great way to fully immerse ourselves in the community. Before long we were very well known, (and liked!), within the townships. The opportunities were almost endless, with some volunteers setting up computer skills sessions, dance lessons and even a debating club.

The evenings were our own, and we would cook a large simple meal together, and take advantage of the very cheap beers on offer at the local store.

Jon: In lots of ways the experience made me more selfish. This needs to be explained, as I know that sounds bad, but I suppose what I mean is that I realized that the sort of adventures that you normally only see on TV programmes, or hear about from those few lucky explorers, those adventures are out there for everyone. But they don’t come to you. So I realized that if I was going to continue to have those adventures (and as any traveller will tell you, once it’s in your blood you can’t live long without it), I was going to have to plan them and look for them. This might mean sacrificing other stuff, or going without those friends that always seem to say that it’s a good idea in the pub, but stall when it comes to booking the flight.

On a less selfish note, my African experience exposed me to just how dire the situation in the third world is. “Obviously”, I hear you say, but in trying to help, I received a clearer sense of the deep seated difficulties, and I thought, for a depressingly long time, that the situation could be literally unsolvable. That is not my opinion now. I realized two things.

Firstly, there is enough wealth in the Western world to wipe out most of the biggest problems in the third world, including infant death from diseases such as malaria and dysentery. The western world does care, just not enough. I think that they are stuck in the same place that I was for a while, the powerless state of being faced with a problem that just can’t be solved. Which is when I realised the second thing, taught to me by a friend, who told me this story.

“The was a man walking along the beach one morning. The tide had retreated back, and thousands of starfish had been left on the sand, slowly drying out. As he walked along, he occasionally picked up the starfish, and tossed it into the sea. A passer-by saw this, and said to him ‘It’s no good you know. There are too many, they’re going to die.’ To which the man, tossing another starfish into the sea, replied ‘That one won’t.’”

I think that there is hope, and that, little by little, our generation can start to make a real difference. Although a “gap yah” may seem clichéd, I believe that this is a label that is used as a defence by those that didn’t. I am terrified that my grandchildren will see footage from 2012 of children starving in the third world, and asking me if we knew that it was happening. I’m terrified of them asking me why we didn’t help.

So, I have decided that helping is what I want to do with my life. When I returned to England I was offered the opportunity to apply for a job with a national heart charity that I had done some volunteer work in the past. After being offered the job, I emailed university and asked if they would hold my place, which they kindly agreed to, and spent two years working full time with children with complex cardiac conditions. I still work part time for the charity, whilst studying for my degree, and I have sought out other opportunities to offer support for children and young people in need of help. Once a week I see a young offender and we work together to try and turn his life around, and I also counsel for Childline on a Sunday evening.

After university, I plan to continue work protecting vulnerable children and young people, possibly on an international scale.

South Africa is an incredible country with a rich and varied history and amazing landscapes. A gap year in South Africa offers unlimited opportunities for adventure travel, from surfing to safari's, this country has it all. But your gap year should be about more than just adventure travel and our...