Skip to main content
Kofi volunteered in with GLA from July 17th- August 8th, 2011. Kofi was born in Ghana, West Africa, but grew up in the Bronx, NY

Why did you decide to volunteer with GLA in India?

Kofi: I chose India primarily because I had been fascinated by the culture of the people beforehand. I was initially offered scholarship opportunities to participate in summer programs at Harvard, and enrichment programs in Japan, Thailand, and various other countries. Though GLA India was provided the shortest time I would be away, I knew I wanted to go to India. There was something about immersing myself in a rich and historical culture that made me knew that I definitely had to choose India. 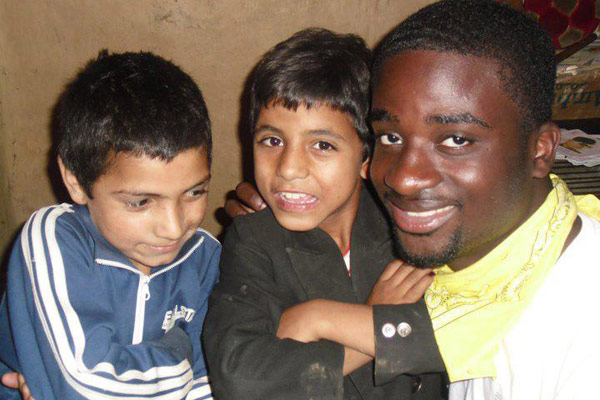 Kofi: In all honesty, the first couple of days, it felt as if we did not do much. We hung out in the hotel and got accquated with one another. But, as our actual volunteering activities started, we began doing physically tasking jobs. I particularly chose to work at a local house, to help lay the foundation for the building of a house. I, and several other students had to remove rocks that seemed to weigh tons from deep holes; some were even down-hill and had to be carried back up. Yes, it was painful to do, but if built character, and appreciation and understanding that this was what the people living in the houses did on a daily basis, without complaining. Mind you, this was not the only type of volunteering offered. Some chose to work with children at two daycare centers, and others worked with a family to clean their houses, and much more.

After our daily rounds of volunteer service, I would head into the cooking tent to help out the cook, another form of volunteering. I really enjoyed working with the cook. Though he spoke limited english, there was a mutual understanding between us. He taught me how to make several Indian csuisines, and even gave me the extra rassions of breakfast, lunch, anc dinner. I guess you can say that hard work pays off eventually. Finally, we also worked with a environmental gourp called Mountain Cleaners. We cordinated a "Children's Day" for children to come and play, eat, and gain knowledge on ways to reduce trash by recycling (through a series of activities). We even had to go around the town to fund-raise for the organization, due to lack of governmental funds (we raised thousands of dollars in less than 3 hours).

Kofi: As much as volunteering was good, I really enjoyed meeting the diverse students that I spend my time with. They have become friends that I still keep in touch with. Moreover, I and another student got to make dinner for a our hotel hosts in Dharamsala, as a repayment of all the mess that we had left. We used our program cordinator's house to make the delicious cuisine, with the help of her husband's mother. There were so many unique experiences I had in India, some including visiting the magnificent Taj Majal, getting a really cheap and luxourious haircut, spending time near the Dalai Lama temple, learning about the Tibetan/Chinese crisis, staying in a castle, and even experiencing discrimination by the people of India, who contantly stared at me because of the color of my skin.

Kofi: My visit to India has made me want to gain more of a global exposure to culure. It is one thing sitting in a classroom with a textbook to learn about culture, but it is certainly another thing to actually be able to immerse yourself in the culture. For this, I am even more deeply ambitious to become a pediatric surgeon that travels abroad to help patiants. Once in India, you will see the poverty in full flight, but never get to experience it for yourself, luckily. It was sickening to see children run to our van begging for money, or seeing a woman with an infant begging for money, knowing that she is being controlled by a boss. This made me want to stake a stand against impoversihment, and lack of opportunity for children to become educated or make something of themselves, only because they don't have the means to do so.

Take a trip this summer that you will never forget. The California: San Diego Service Adventure program is open to teens ages 14-19 and is designed for those with a passion for Environmental Stewardship and Public Health & Medicine. Participate in community service projects focused on health care...