Skip to main content
Miguel Mendez, 18, is from Chicago, IL. He is a student at Williams College, planning to graduate in 2016. Miguel volunteered in Ecuador and the Galapagos Islands on the GLA Preserving Nature’s Wonders program from July 30th-August 13th, 2011.

Why did you decide to volunteer abroad with GLA in Ecuador?

Miguel: I had always wanted to travel abroad and experience a different air; a different culture than what I knew from my time at home. I had grown up in Chicago, a huge, concrete jungle somewhat void of the natural wonders of the globe. Since I was young, I loved learning about nature and being deep within the forest reserves that were around my area. In the books, everyone notices the talk about the wondrous Galapagos Islands, islands seemingly magical for their importance to the scientific community. Islands so pristine and so special, only a limited amount of the earth’s population is allowed to visit each year. Islands that I knew I had to visit and truly experience.

Another plus to the trip was the visit to the capital of Ecuador, and second highest capital in the world, Quito. It was breathtaking, quite literally, at times, due to the elevation change, to see the views from the city deep within a valley of beautiful mountains and forests on its outskirts.

Global Leadership Adventures, GLA, was one of the few companies that I researched that gave me a great vibe about its staff and ability to lead in the countries. They developed a 5-point safety system that let me know that I would be well taken care of and would have many activities to pursue on my trips. Also, I was lucky enough to obtain a scholarship from a local organization to assist with my travel expenses and tuition with GLA.

Miguel: We arrived to the Galapagos Islands after spending roughly two days in Quito and traveling. Here, we moved into the volunteer home of the family who owns and operates a ranch on the island of San Cristobal. We were there to help them rehabilitate land owned for many generations in their family, which now was to be used for a future turtle shelter. 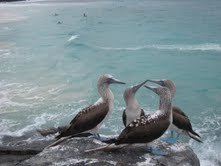 On our first day, I expected something easy and light, but that did not come. Instead, our trek to the site was hard enough, having to tread up muddy hills and broken paths in our rain boots. I was initially very alarmed and almost disappointed that this would be actually difficult. The first day was hard labor of clearing the land of debris like tree branches and twigs. This was necessary to ensure that the plastic they would place over parts of the land, to kill of nonnative species, would not rip or break.

After the first day, I was exhausted and it didn’t help that the trek back was not much easier than going up. Even though it was difficult, I really enjoyed being with my group and being provided a new liveliness. The next day we went to the same place, but this time we were placing the plastic down and putting rocks over it most of the day. We also began to plant native species of plants on the boundary between the land and the wild preserve. The following day I was named group leader with another teammate and we assisted in the overall running of the work day. We were able to split the groups in two, while the group I was with worked on the greenhouse. They needed more trees, smallish trees about the size of bamboo, to complete the structure. Gripping the machetes that were given to us, we wholeheartedly spent all our force on chopping down trees and bringing them to the greenhouse. The views from the top of this hill, where the land was located, were truly exceptional, nothing like I had ever seen before.

Being able to be a leader was also another strength that allowed me to dive deeper into the community service and learn more about myself. This opportunity provided by GLA is definitely worth it! On the second to last day, we were at El Junco National Preserve assisting the only worker that maintains the park in planting more native species. We also helped move plants from the nationally owned greenhouse to the national park preserve.

On our final day, we finished planting and were let go early as a thank you. Each of the days we worked roughly four hours, and the rest of the time we spent touring San Cristobal Islands. Some of the activities we engaged in were swimming with sea lions, snorkeling, and kayaking.

Miguel: Ultimately, this experience has helped me so much both academically and socially. Not matter how difficult or demanding the community service was, it provided me new perspectives on life. I know now that I want to continue to serve the world, especially for those that are less unfortunate and for the environment, which is the most essential part of life. It will truly be an integral part of my experience and something I will continue to pursue at Williams. Hopefully, this summer I will be going on my second GLA trip as a peer mentor!

Come experience one of the most pristine natural environments where conservationists are working to protect this unique ecosystem. Program Highlights - Volunteer to restore the habitat of native Galapagos wildlife - Snorkel with sea lions, turtles and blue-footed boobies nearby - Wander the...