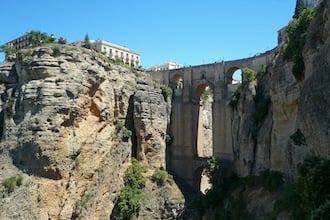 Allison: I choose Athena Study Abroad because they offered a month long program in Spain for Spanish language. My schedule didn’t allow for me to do anything too long, and the time and price were right. Once I began working with Athena, I realized that I had made a great decision with whom to study abroad, and they were extremely helpful during the planning process. I am so glad that I chose them.

Allison: Before departure, Athena set up all of my housing, enrollment, and other details about my stay in Sevilla, and upon arrival, I took over. Athena helped me to plan and be prepared, but I was able to be independent and do what I wanted to do. Many people who I have talked to before who had studied abroad “had their hand held” and were always travelling in groups. They never had to get around on their own, and were always very sheltered. Athena was there if I needed support or assistance, but they made it possible for me to be independent and make my experience the one I wanted.

Allison: This experience has impacted my future in that I plan to continue my Spanish language education and hopefully become fluent. It also has been a great lesson in finding who I am and what I am capable of doing. I’ve made lasting memories and friends, and have a desire to travel and see more of the world.

If I were to go abroad again, I think the only thing I would change is to add more time. I’ve travelled abroad many times before, but never before alone. Now that I know what it’s like, I would love to do it again and do it longer!

Highlights: Academically, the greatest part of my trip was improving my Spanish language skills and being able to hold conversations and give presentations in Spanish. In only 4 weeks, my language skills improved tremendously. Class was challenging yet fun, and I learned so much. Not only did I learn to speak the language better, but I learned about the culture, the country, and the history of Spain.

Overall, my greatest experience was the independence that I had. I travelled a lot on my own during my classes, but also travelled after my program around Spain and to Turkey on my own. I gained so much confidence being able to get around in a country that didn’t speak my native language. I now know that I am capable of navigating all forms of transportation. Everything about my trip was wonderful, but the independence and confidence that I gained is irreplaceable.

Morning: Every morning my host mom prepared breakfast for me, which usually consisted of cereal, toast, or a Spanish pastry. I would then walk along a variety of streets, some busy, pedestrian, cobblestoned, and narrow to get to the school, CLIC. Classes would begin at 9, and we would have a break at 11 to socialize and grab something to eat. Classes would resume at 11:20 and last until 1, after which I would talk with my friends at the school, or wander around the city until my host family served lunch at 2:30.

Afternoon: After lunch, I would stay in and do my homework and rest, because it was extremely hot in the afternoon, and many shops would close up for a few hours. Early evening I would then head out, once it had cooled off, to explore the city and see some of the touristy sights. CLIC would often have events planned in the afternoons and evenings, such as tours, excursions, and movies that I would sometimes attend.

Evening: In the evening, the Spanish people come out to socialize and shop, and the streets, bars, and restaurants fill with people. The Spanish do not usually eat dinner until 10 PM or later, so sometimes it was difficult to find dinner at an earlier time. While I was in Sevilla, the Euro Cup was being held, so on game nights, people would crowd into bars and restaurants, to watch the game. They were especially loud and involved when Spain was playing, and the streets were active and noisy the night that Spain won the tournament.

Athena Study Abroad offers this exciting program, in Seville, Spain at Centro de Lenguas e Intercambio Cultural (CLIC). Though CLIC is a great option for learning the Spanish language, there are classes offered in English through an agreement with the University of Seville. Home-stays are encouraged...