Skip to main content
Caroline Kershner studied abroad with IES Abroad in Vienna, Austria in the Fall of 2011. She is from Ambler, Pennsylvania and currently studies humanities, with a focus on European Studies, at the University of San Diego. She enjoys photography, baking, traveling, and spending time at the beach with friends.

Highlights: In terms of academics, a major highlight was taking classes in German. It was something I had always dreamed of doing and finally had the opportunity when I studied abroad. After taking a language for so many years, nothing could be more rewarding than not only living in a country where the language is spoken, but also taking courses taught in the language. Initially I was a little intimidated by the classes, but looking back, I am so proud of myself for taking on the challenge. I was able to see my German improve over the course of the semester in ways that would not have been possible had I not taken these classes. And since the number of students enrolled in these classes was rather small, we all got to know each other quite well. I loved having class with the same small group of people. 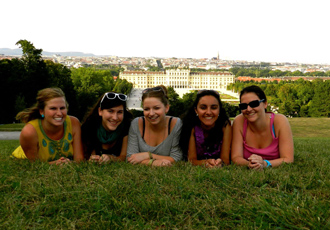 As for the overall experience, it is nearly impossible for me to pick just one highlight. Traveling in Europe is incredible and so is the experience you have living in a foreign city. However, for this I will discuss the relationship I formed with two locals. My aunt emailed me about a former colleague of hers (that lived in Vienna), whom she had worked with over 25 years ago. I emailed them on a whim and they responded by saying they wanted to meet me. Little did I know then that my aunt’s former colleague and his wife, two retired teachers, would soon become my adoptive Oma and Opa (German for Grandma and Grandpa) We would spend entire days together on the weekend, touring museums, attending church concerts, going on excursions, and having home cooked meals together, all while speaking German! The relationship that developed between us is a testament to the welcoming nature of Austrians.

Morning: My roommates and I would usually walk to school from our apartment. We lived in the sixth district in Vienna, and our school was located in the first district. We absolutely loved the 20-30 minute walk, which took us by the Opera house, down Kärtnerstraße (one of the major shopping streets in Vienna), past the Naschmarkt (the largest outdoor market in Vienna) and the Secession building, plus so much more. If the weather was unpleasant, we could take the U (subway) as well. Our apartment was located only a block from a stop on the U4 line, which was incredibly convenient. We often spent our mornings in class at IES. Even spending time at school was enjoyable, because the building itself was a palace! Right in the middle of the first district, Palais Corbelli is a spectacular location for a school.

Afternoon:Often I had a break after morning classes, in which I would either go home or stay at IES to study. I usually had classes in the afternoon as well. During breaks however, we would often explore the city. The public transportation in Vienna is very easy to use and understand. I get lost on a regular basis and found myself easily navigating while abroad. Especially during the Christmas season, which actually starts in November, we would visit the local Christmas markets in between classes (I describe these more in the next section). I admit I spent quite a bit of time studying. IES does appear to challenge students academically more than other study abroad programs. And yet, that made it more worthwhile in my opinion. Besides the required German course everyone was required to take, I opted to enroll in two other classes taught in German. The extra time I devoted to these classes was a small price to pay. I felt so accomplished every time I attended those classes, because they were not taught in English. 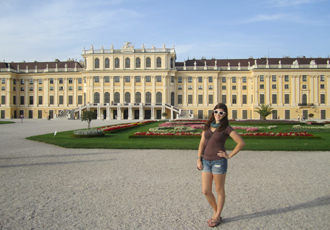 Evening: I would often stop at the local Billa or Naschmarkt on the way home from school, to purchase groceries for dinner. Shopping for food is done far more often in Austria, in comparison to America, where people stock up for weeks at a time. After making dinner in our apartment, my roommates and I absolutely loved to visit the Christmas markets. Like I already said, they began to open in November and were simply magical. We would go to a market, buy some Punsch or Glühwein, wander around, and simply enjoy each other’s company. The lights and decorations, the merriment of the stands, and the general atmosphere is so festive and enjoyable. Of course, there were also nights when we all had to study for school. On those nights, we would usually all be either stationed at our desks or working in the living room.

A stunningly beautiful city, Vienna occupies a unique position at the crossroads between east and west, north and south, long making the city a central meeting place for trade and international politics, as well as arts and culture. Can you imagine learning about Freud’s theories of psychoanalysis...