Skip to main content
Kaitlyn Nolan is a recent graduate of Stonehill College and spent Spring 2011 studying abroad in Grenoble, France with API. She enjoys adventures and plotting her next trip abroad.

Highlights: Academically, I was thrilled to be able to speak French all the time. By having complete language immersion, my French improved considerably. When I left the country, I usually had trouble switching to English to speak to strangers as my first inclination was to speak French. Additionally, I did not have a wide range of French classes to take at my college. Therefore, I was really excited about the choices I was given at my French university.

Study abroad truly was a life-changing experience and I am so happy that I chose Grenoble to be the backdrop to this experience. The city gave me the confidence in speaking and living in a foreign language and giving me the courage to try new things. I had an extraordinary time with the locals, who were more than willing to let me practice my French with them and show me the best places to visit. Grenoble is also only an hour by bus to the Lyon airport which provided me a gateway to the rest of Europe. I was able to visit seven other countries while abroad and each had a profound impact on me. However, Grenoble had the biggest impact and will always remain home to me.

Morning: A typical morning in Grenoble consisted of preparing for class. I would have a light breakfast of toast and Nutella (I couldn't get enough!) or cereal. I would then head out to my tram stop at Notre Dame Musee to get to my university. I lived in the city center so it only took me about 15 minutes to get to school. Morning classes consisted of French grammar. These were organized by language level and had a small class of about 15 students from all over: the US, Europe, and Asia. We worked from a small textbook and also spent time in a multimedia lab. These classes focused more on speaking and listening rather than reading and writing.

Afternoon: We had a break for lunch (usually accompanied by the formule etudiante: a Grenoblois salad, apple, yogurt, and bread) and then spent the afternoons in electives. These were with students of varying language levels and the classes were HUGE to what I'm used to. The sizes ranged from 75 students to about 200. While a bit overwhelming at first, I found it to be an interesting change from the small liberal arts college I attended here. The courses I took fit within my International Studies major and consisted of Contemporary French History, Economics, and Contemporary French Politics in addition to a vocabulary class. 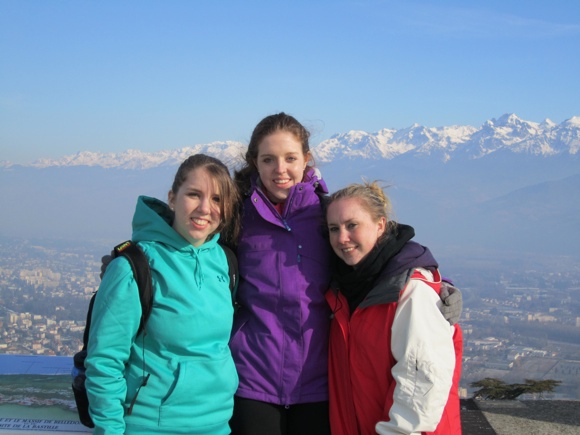 Evening: Once classes were over, my friends and I had free time until dinner which was usually served around 9pm. We spent the time exploring Grenoble's city center, shops, and parks. We spent a significant amount of time walking, but it truly was the best way to explore the city. Dinner was made by my host mom and we were accompanied by my host dad and my roommate Megan (who happens to be one of my close friends from college). After dinner, we either relaxed in our rooms catching up with news from home or explored the Grenoble nightlife.