Skip to main content
Nick van de Klundert is 25 years old and lives in the Netherlands. He studied Communication management at the Amsterdam University of Applied Sciences and currently works as a junior product manager. He enjoys travelling with his girlfriend Lisette, spending time with his friends and watching movies.

Why did you decide to volunteer abroad with SAVE Volunteering in South Africa? 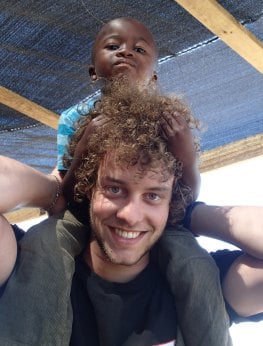 Nick: It was actually my girlfriend’s idea. We wanted to take a trip around the world and I really wanted to go to Australia. Her big dream was to do volunteering in Africa. At first I wasn’t really into it, because my idea of volunteering in Africa was digging a well or something for some native tribe in the middle of nowhere. I didn’t know if it would be safe enough, and I wanted to see and experience a lot of different things in the time we were there. So I had a lot of doubts. But then we decided to go to a travel agency that provides travels for young people and see what they could offer us.

They came up with the option to volunteer at SAVE, to work with kids and still have the opportunity to see Cape Town and take trips through South Africa. This sounded like the perfect combination. I really like working with kids and I was excited to be able to contribute to their education. After I had taken a look at the SAVE Facebook page I was convinced that we should go. And that’s how I ended up there. It wasn’t my idea at first, but I’m really happy and thankful my girlfriend convinced me, or else I would have missed out on a great experience.

What was your favorite moment of the volunteering experience? 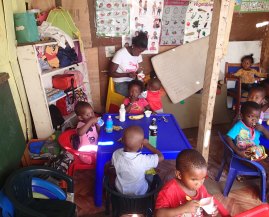 Nick: One of the best moments was the day we took forty kids to a birthday party. It was the party of a one year old kid from ‘wealthy’ parents. Instead of just inviting their child’s friends, they decided that he was too young to understand the concept of ‘birthday’ anyway, and invited kids from a settlement. There’s a difference between a township and a settlement: a township is recognized by the government and has basic amenities such as electricity and water, a settlement really has nothing.

The parents asked SAVE to get the children and supply volunteers to help them during the party. And it turned out really great. These children had never been to a birthday party before. They probably never had cake, or French fries or hotdogs in their lives, and now they had it all. For one whole day they could really be careless and just play, eat and get their faces painted. The other guests at the party even brought presents like bicycles, diapers, and toys which they donated to the settlement. When we brought the kids home my girlfriend made a great picture where you can see the younger kids running to the older kids to tell them about the great day they had. This was one of many great moments that I will remember for a long time.

Nick: I would prepare myself more in how to teach little children. It was a challenge to keep everybody focused and quiet, let alone teach them something while we didn’t speak their language. SAVE had a ‘diary’ of each crèche, where you could read what the children had already learned, but there was no real lesson plan for the future. It was especially difficult because of the large age differences in the classroom. Some kids were three years old, others six, and that meant a huge difference in learning ability. If I would go back, and I think there’s a really good chance I will, I would first research some teaching methods or something, so I have a better idea of how to deal with teaching kids of different ages. 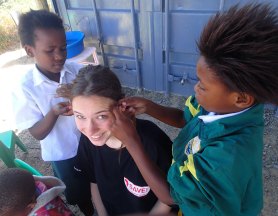 Nick: I met a lot of great people. The people from the SAVE organization are really dedicated and inspiring and I met a lot of great volunteers too. We became friends in a relatively short amount of time and I still keep in touch with some of them. But one person has really made an impression that I will not easily forget. His name is Ndoti and he is a little kid from the township Dunoon. He was one of the older and brightest kids at our crèche. While the other kids were playing outside, he would grab a book, sit on my lap and ‘read’. Of course he couldn’t really read, but we noticed early on that his knowledge of the English language was pretty good. He would point at pictures of animals or vehicles and tell me their names in English. If he didn’t know a word, I told him and he remembered it almost immediately.

But one day he was complaining of pain on his leg and when we lifted up his trousers there was a big infected wound on his little leg. We called someone from SAVE and she took him to the hospital. Later we heard that the doctor had said he would have died within a week if we hadn’t done anything. I was really angry that this little bright kid almost died just because his parents neglected him. If I could have taken him with me back to the Netherlands I would have and I often wonder how he’s doing now. 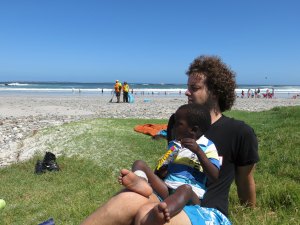 Nick: Yes, a lot. The fact that the people in the townships have almost nothing and still survive is really inspiring. The kids can be happy and excited with the smallest things, like a tennis ball, paper planes/hats and blowing bubbles. In the ‘Western’ civilization we take a lot of things for granted that the people in townships and settlements don’t have. My mother (and I guess a lot of other mothers) used to say that there were kids starving in Africa when I didn’t eat all my food. Now when I think of poor African children, they actually have a face and a name. But on the other hand I also saw a lot of nice people and love. Not all children are being neglected, some of them get good food and clothes.

The townships aren’t just dangerous places that should be avoided by everybody. There are a lot of good people there who appreciate the help they get from organizations like SAVE. Never during my time there have I felt threatened or scared, although that might have been a little naïve, because there is always an element of danger present. Overall it felt good to give people a little help without expecting something back. But of course I did get something back: great experiences, a look inside a different culture and memories for life.

SAVE Volunteering is a Non-Profit Organisation. We are NOT a booking agent: we run, manage and fund all of our Humanitarian and Wildlife Projects with the help of volunteers. We believe in transparent and sustainable programs that impact our local community and wildlife. The volunteer fees go...