Skip to main content
Alistair is in his 4th year studying biology at the University of British Columbia Okanagan in Kelowna, BC. Alistair is 22 years old and enjoys being active in all ways during his spare time. Alistair also wishes to pursue a future career somewhere in the medical field.

Morning: I participated in the pre-medical program offered by HLD, so the typical morning during the medical rotations went something like so: Days were usually packed, so wake up was around 6 am. I hustled with my rotation partners to get dressed, iron the lab coat, and eat a delicious buffet breakfast in the hotel. At 7am we were picked up by the company bus, and our medical student tutor. The bus rides varied depending on the hospital you were visiting that morning, but average at about 40 min. Until lunch we were in the hospitals interacting with patients or viewing procedures. 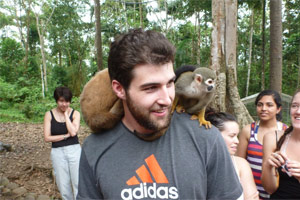 Mornings during the volunteer week building houses in the rural community were different. Wake up was around 7, then we ate as a group at the hostel, went over the days plan, then headed out to the community to resume the work on the houses.

Finally during the touring days, wake up was around 8, we had a more relaxed breakfast and then headed out on whatever the days crazy activity was. This included both cultural activities in the city, conservation activities in the amazon, and adventure sports throughout the country.

Afternoon:For the medical rotation days, the afternoon was similar to the mornings. We ate lunch as a group in the city at different authentic café’s then headed back to our rounds in our groups till about 6 pm.
During the volunteer weeks, after the morning shifts at work, we went for lunch or even had lunch prepared for us by the locals once. Then we would resume work on the houses till about 3 o’clock. When the kids got home from school in the afternoon, we spent some time with them playing games and getting to know them personally. This made the days work seem like it was no problem and totally worthwhile.

During the adventure tour, afternoon varied. One example afternoon that stands out was on the beach in Canoa, we spent the afternoon learning to surf, and hanging out playing beach volleyball at a hotel run by a friend of the company. Great Day! 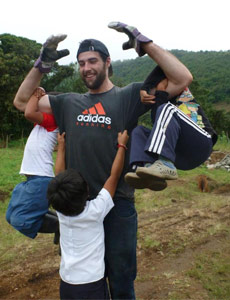 Evening: During the medical week, evenings contained lectures by our tutors on medically relevant skills, and techniques. For example we had lessons in stitching technique, CPR, burn care, head trauma, and others. If we had the night off the group usually went to an Ecuadorian restaurant to try some recommended foods by the company owners. Some nights we had night rounds, these lasted in the hospital till about 2am.

During the volunteer week, Evenings were spent at the hostel relaxing. I was always super tired after the days work, and everyone went to bed pretty early. One evening near the end of our week, we played a pick up game of soccer against the community’s players, that was fun!

An on the tour of Ecuador, we spent the nights as a group going to restaurants or bars if we wished. We always had a leader with us to make sure everyone was ok, but what we did was up to us, and we had some fun nights throughout the trip!

Highlights: For the week of volunteer work, the days could be long and a grind, but when you see the kids at night it makes it worth it. The gratitude the community shows when you leave is surreal and I have never felt like that before. I definitely will remember that. As for the trip as a whole, it’s hard to pick one highlight. Everyday had a highlight, but if I had to choose, I would say the night we spent in the obstetrics ward, and I saw a live birth for the first time was pretty crazy.

Help, Learn and Discover is a student-driven volunteer organization that offers four week Pre-medical and Volunteer programs in Ecuador. These programs provide students with three main opportunities: to Help those less fortunate, to Learn first-hand knowledge about the medical field, and to Discover...