Skip to main content
Ginny Allen is a 21 year old senior attending the University of Nevada, Reno. She recently returned from studying abroad in San Sebastian, Spain during the spring semester of her junior year. She attends studies journalism and Spanish major and will graduate in the spring of 2015. She is studying public relations, but really enjoys writing and hopes to incorporate her future career. She decided to study abroad because she wanted to improve her Spanish and experience living in another country. 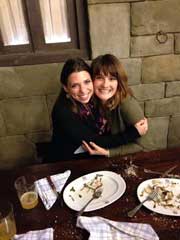 Ginny: I had always hoped to study abroad during my college years. I had lived in the same town for my entire life, and I knew that I wanted to travel and experience other cultures. I had heard that the USAC program the The University of Nevada was excellent, and that was actually a major factor in making my decision to stay in Reno for school. When I decided apply for a study abroad program I already knew that I wanted to study somewhere that would help me learn to speak and understand Spanish.

Ultimately I chose to study abroad in Spain because I had always wanted to travel around Europe, and I thought it would be good opportunity to not only learn the language but visit many other countries as well. I had spoken with USAC alumni about the various Spain programs and researched locations before choosing to study in the San Sebastián. The combination of the beautiful location and the recommendations of other students helped me solidify my decisions to study there. It turned out to be more than I ever imagined.

Ginny: I think that every experience in life changes a person, or at least it should. That is the only way that we can grow. That being said, I believe that my study abroad program has affected me personally as well as the trajectory of my life. Studying abroad has given me greater confidence in a lot of areas of my life.

First of all I learned so much about the Spanish language and got to practice with native speakers for five months straight. I also feel accomplished in moving to a new city, living with strangers and making my way in a foreign county. All of this has improved my interpersonal skills, my organizations skills and my traveling skills (yes, traveling definitely takes practice).

After studying abroad I feel more open to other cultures, new experiences and have a greater desire to learn more about the world. I have come home with a more open perspective of my life, the world and of other people. Even though it wasn’t always easy to adjust to a very different lifestyle I feel I have grown so much from my experience abroad. Living in Spain has also taught me the value of taking time out to relax. I understand the value of hard work, but now I see that there are more important things in life than working to make money.

Recall a time when your education and experience didn't prepare you for a situation abroad.

Ginny: All of the Spanish classes I have taken since middle school all the way up until my study abroad experience I have been taught a version of the Spanish language that I found to be pretty different than the one spoken in Spain. Though I understand why American Spanish classes would be focused on a Mexican dialect and teach the vocabulary relevant to this are of the world, but it did cause me some confusion when I tried to speak Castilian Spanish.

Almost every teacher I have had since middle school has told me that I will not need to use the Vosotros form when conjugating in Spanish. However, when I arrived in Spain and did not know how to conjugate in that form I felt frustrated, embarrassed and a little confused. Even my teacher in Spain noticed that none of the Americans knew how to use the Vosotros form. I think that, even though in Mexico and South America they do not use that form, American students should still study off of the forms and tenses, at least basically. 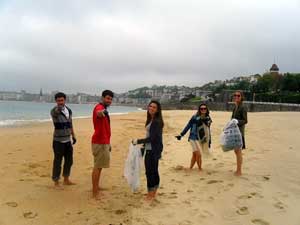 Ginny: My most meaningful souvenir from San Sebastian is a necklace given to me by my host mom. It is a tiny silver shell on a simple chain, and I could not love it more. The main beach in San Sebastian is called La Concha, which means shell. The famous El Camino de Santiago, a major symbol of which is a sea shell, also runs partially through the city and we learned a lot about the significance of the walk and its history in my classes.

The necklace is important to me because it not only represents two important aspects of my abroad experience, but reminds me of the love and hospitality shown to me by my host mom. She welcomed me into her home, showed me around the city, and taught me more about speaking Spanish than any class I’ve ever taken.

The San Sebastián program opens an academic window on the Spanish and Basque people, introducing you to the rich diversity of Spain and offering a truly multicultural experience. San Sebastián has the highest level of bilingualism of any of the area’s cities: all of its inhabitants speak Spanish...