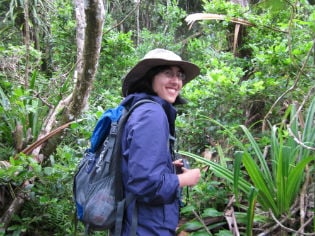 Highlights: I think my favorite experience was walking along the transects (paths cut through the forest for scientific purposes) with my team, looking for lemurs at night, to record their distribution in the fragments. We found them by eyeshine. The light from our headlamps bounced off their large eyes. Their eyes, the only part of them that was visible, gave off a distinctive, beautiful amber glow that was pure magic. You could tell the species by the size of their eyes: mouse lemurs had tiny eyes and were hardest to spot. Fat-tailed dwarf lemurs were middle-sized, and wooly lemurs had the largest. All were quick to move. The guides identified the tree species they sat in, we measured the distance to the tree from the transect and circumference of the tree, and noted it all on our data sheet. We all worked together, quickly assessing which tree and how high up they were as well. It was an amazing feeling to spot lemurs for the group. One night I spotted eight. I was on top of the world.

The warmth, generosity and incredible resilience of the Malagasy people was a huge part of my experience as a whole. Their country is beautiful. They are beautiful. It's hard to generalize, but I think part of the attitude of the Malagasy could be summed up by the Malagasy word "Alefa!" Which could be roughly translated as "Come on!" Whether calling the truck spotter to jump back on the camion (Alefa!) that took us along impossibly bumpy and pitted roads from the city to the village, or entreating wallflowers to dance (Alefa!) at our village music gatherings, the word conveyed a rich enthusiasm for life, and energy, and watching out for other people. (Alefa! Alefa!)

Morning: I'd wake up in my tent to the sound of roosters and my travel alarm. I'd greet my fellow ACP volunteers in the longhouse and we'd share a breakfast of rice, mofo (sweet bread balls that tasted like chewy donuts), bananas, and sometimes banana bread and mandarins. We'd pick our chosen task for the day: herps (surveying frogs, lizards and snakes in forest fragment S8 or S9), lemurs (surveying brown-collared lemurs or observing the behavior of a group), beccariophoenix (surveying endangered palms), and on some days, teaching children environmental education, and when the village women requested it, building a fuel-efficient stove. Usually, I'd pour my chlorinated water out of the 50-liter jerry can, put on mosquito repellent, and head out along the dirt paths to the forest with my group and Azafady guides. We'd spend several hours out in the fragments, stepping over branches, under vines, through swamps, in pursuit of our elusive wildlife.

Afternoon: After a filling and restorative lunch of rice and beans, and maybe doing dishes duty, I'd swap tales with the other volunteers of the lemur count, which rare chameleons we had spotted. I might be working with some of them on a lesson plan for the following day, for the kids. Trying to think how to explain groups of plants, or the important aspects of biodiversity, and write a fun story related to it. I might help enter some of the data from the survey into the camp's one computer, whose battery was charged some distance away by a generator. The Malagasy guides might pull us aside for our weekly language lesson. I might also work on flyers for the upcoming World Environment Day awareness event. Later I might play a game of cards with some of the volunteers, go get water from the well to take a bucket shower, or wash my clothes.

Evening: Before the dusk got too deep, I'd dive into my tent and find my headlamp. I'd join the others for a hearty dinner which was usually pasta or rice and another staple like squash, stewed vegetables, zebu (a type of cattle), or fish. I'd reapply repellent and sometimes prepare for a night hike, when you could count all the nocturnal lemurs and herps. If we weren't out surveying or having a fun night hike as a treat led by one of the guides, sometimes we'd play more cards, do some more data entry or event prep, chat, listen to the music of some of the camp musicians, or just retire to our tents for a peaceful sleep. I'd often watch the frog that made the spot between my tent and rainfly its temporary home. With my headlamp, I could see its tiny feet padding around as it too settled in for the night.

The SEED Conservation Research Programme (SCRP) is based in the beautiful coastal region of Sainte Luce, surrounded by rare and threatened fragments of littoral (coastal) forest. The programme works to integrate scientific research with community conservation, where you will combine hands-on...