Skip to main content
Ann Wilson, volunteered with VIN after her honeymoon to Mount Everest Basecamp. She's Danish, but lives in Amsterdam, the Netherlands. Ann is a demand and supply planning supervisor in an multinational company. Upon my return from Nepal she founded Friends of VIN – who now partner with VIN. 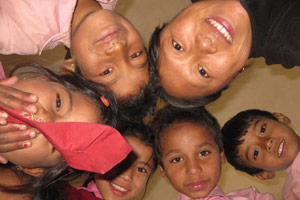 Morning: I lived in a village about a 45 min. bus ride outside Kathmandu. A typical day would start around 6am. Aama (mother in Nepali) would start washing the dishes from the night before and start preparing breakfast; daal bhaat (rice and lentil soup).

Preparing breakfast in rural Nepal isn’t as simple as it sounds – it takes about 90 min. to cook the rice, grind the masala, cook the lentils…all done over an open fire.

Afternoon: After breakfast I would walk to school where the students sang the national anthem every day at morning assembly followed by some simple exercise. There were about 35 children in the ECD (early childhood development) class where I taught basic English and math. We would always start with a bit of singing and then divide the group of 3-12 year olds into small and bigger children. 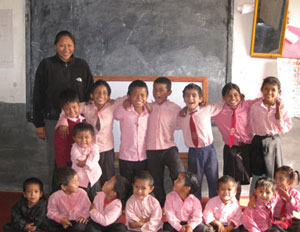 Evening: After school I would sometimes visit other volunteers, go for walks in the hills or prepare for the following school day, but I would always be home just before dark. That’s when we start preparing dinner – daal bhaat – and around 8-8.30pm we would usually go to bed. It’s limited what you can do when you don’t have any electricity.

Highlights: My very first day was a bit of challenge but I learned so much. I had agreed with the Nepalese teacher that I would just follow her and then we would discuss how to continue, but in the last period she had to go to another class to teach and asked me if I thought I would be OK having the kids on my own…

The minute she exited the class, the kids went CRAZY. I eventually gained the children’s respect and it was much easier after that.

Join Volunteer Initiatives Nepal on one of many types of volunteer programs in Nepal! VIN volunteer program in Nepal offers an affordable opportunities to volunteer in Nepal. This is your chance to make a considerable contribution to Nepali society, while at the same time experiencing the rich...