Skip to main content
Caitlin Sirianni, 22, studied at Bond University from January to April 2014. Originally from Philadelphia, she is currently studying Exercise Science at the George Washington University in Washington D.C. 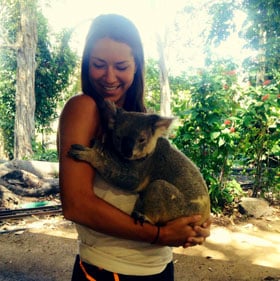 Caitlin: My best photo was taken at the top of a sand dune on Moreton Island, which is the 3rd largest sand island in the world. I love this photo because the sky, ocean, and sand look like no sky, ocean, or sand I had ever seen.

This photo also reminds me of my favorite trip: camping with the best tour guides, tons of activities, and great meals. This photo was taken right before I went sand boarding; I conquered my fear of heights and speed and love being reminded of that!

In order to go sand boarding, we had to do a 20-minute climb to the top in the hot sun with burning calves and thighs. It was well worth the sublime view!

Caitlin: Don’t stalk everyone on social media before going abroad! It’s so tempting to check everyone out on Facebook especially when your program is only 15 people (which mine was). 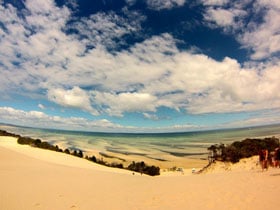 I made an active decision not to do this. While I admit, I did briefly check out people’s profile pictures after accepting friend requests, I stopped myself as soon as I started making judgments. Of course I still had my preconceived notions of people on the group, but I tried my hardest to push away those thoughts.

It really allowed me to enter the program with an open mind and become friends with people I maybe wouldn’t have had I been too judgmental based on their social media presence. For example, I didn’t know where people were from or where they went to school, so it was much easier to have genuine, in-the-moment conversations.

Caitlin: Going abroad helped me figure out my priorities and what I want in life more than I ever expected it could. I went to Australia a pretty stressed student (and person) who never slept well and over analyzed most things that were largely out of my control.

Australia immediately taught me to relax and understand that certain things are out of my control and that’s ok. Things in life generally work out whether or not they’re done yesterday or in a couple of days. Not only did I accept this but I also adopted into my own daily life. This simply made me a much happier person.

The people on my program, the environment, and the Australian culture all made this possible. Now I am finding it much easier to acknowledge and do the things that truly make me happy and say no to the things that don’t. Caitlin: I found that most people don’t go to Australia for the food; they go to Europe. However, Australia is a melting pot of cultures that leads to a unique cuisine. There are European influences, such as British, Italian, and Greek, Asian influences, my favorites being Indian and Thai, and some signature Australian dishes.

Of course fish and chips are a must, and you can find this pretty much anywhere you go. Beyond that, the fresh procedure, coconut water/smoothies, falafel/kebabs, and Asian dishes were some of my favorite things to try, especially at farmers markets. Have an open mind and try everything!

With its small class size and modern campus, Bond University offers a study abroad experience unlike that of other Australian universities. Bond's community fits perfectly in the modern campus built to capitalize on the school’s small size. The 10:1 student to faculty ratio further heights the sense...