Skip to main content
I'm an avid wildlife lover from Ontario, Canada. Although I completed my Honours Degree in English and Professional Writing, my passions are diverse - ranging from writing to playing music to wildlife rehabilitation. Growing up on a 200-acre farm in rural Ontario, I developed a love of the outdoors and a great respect for nature at a young age. My passion to help the wild world -- whether abroad or at home -- continues to grow with each passing day. 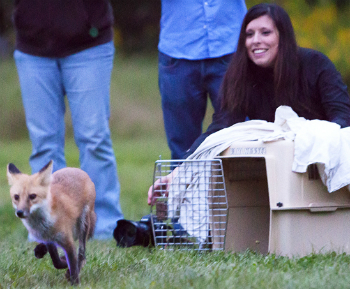 Rebecca: On this particular trip, I learned a lot about resourcefulness and the importance of collaboration and teamwork. Life in the Guatemalan jungle can be rustic to say the least, and I was amazed at what this rehabilitation facility did with relatively few resources - they re-purposed many items in ways I would never have considered and found a way to make do without the luxuries that we have in North America.

The animals were well cared for, and the centre functioned at maximum efficiency all the time. I also realized that in a setting like this, where things need to flow smoothly at all times, you need a team whose members have consistent goals and work ethic. No drama, no griping, just hard work -- and the payoff is immeasurable. 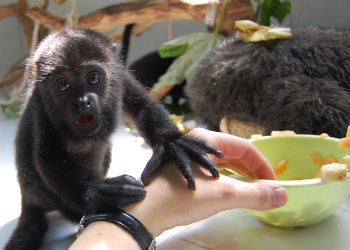 Rebecca: I was given the opportunity to work with two baby howler monkeys during my stay. Both had been rescued from wildlife traffickers, who had killed the monkeys' mothers and taken the babies to be sold on the black market. This meant extra shifts for me (feeding, cleaning, weighing, etc.) but I was also able to witness the bond between them grow, as they would become the next troop of monkeys to be raised and rehabilitated -- and eventually released -- together.

It was awesome spending so much time with these two and watching their behaviour. I spent many hours feeding and caring for them and feel fortunate to have been given this responsibility. It was a unique opportunity and well-worth the extra time and effort!

Rebecca: I booked my trip several months in advance, and Animal Experience International provided a comprehensive preparation guide that was very helpful. The only thing I would recommend for this particular placement would be to bring a high-quality anti-itch ointment along for bug bites!! The yellow flies seemed to pick on some people more than others -- I learned that the hard way, and I had some difficulty purchasing a product locally that really helped. Had I brought Lanacane or something similar, I would have slept much more comfortably!

Looking back, I wish I had spent more time learning Spanish. I learned the basics (numbers, days of the week, how to ask basic questions) but I feel that my experience would have been even more enriching had I known more of the language when I travelled. Almost all of the staff at the rehabilitation centre also spoke English, but when I was exploring more of the area, I would like to have been able to communicate better with the locals and shopkeepers. 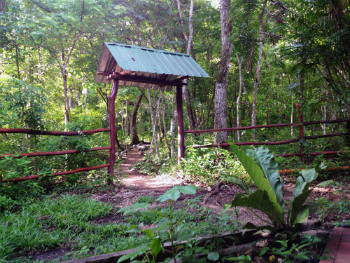 Rebecca: Every day in the jungle was an experience that I could not have had at home! My surroundings, the sounds, the sights, sleeping in the fresh air, the wild monkeys waking us up every morning, the birds and animals I worked with...everything was unique to the setting I was in.

Rebecca: If you're heading to Guatemala to do this program, you will work hard and sweat a lot! The setting is wild, simple and beautiful. Embrace your surroundings and work hard, and you'll have an awesome, rewarding time. And when you head to the island twice a week, enjoy a big meal and a cold beer at Raices Cafe on the water front. I would do this placement all over again in a heartbeat.

The wildlife of Guatemala is under threat from habitat loss, unsustainable hunting and capture for the illegal pet trade. The decline in local populations of wild animals is dramatic. The large flocks of scarlet macaws reported by early explorers have been reduced to just 300 birds in the Laguna del...