Skip to main content
Mr. Tanaka first encountered a foreign country, its people, and its culture during a three-year stay in the US as a child. In the process of learning English for survival, he became fond of American–English movies and humor. He started working for KCP as a student coordinator in 2001 and has worked for the program and its students since then. As a personal interest, he has trained in martial arts through the lens of katana. 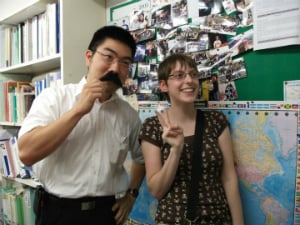 Tomohisa: For us it’s the dedication of faculty and staff. Given the mission of Japanese immersion, they run with it: they really go out of their way to support the goals of people who study at KCP.

Faculty respect students’ diversity while at the same time teaching them the Japanese language, culture, and ways of thinking.

KCP is a place where people from a number of different countries gather together and study. By studying with colleagues from different parts of the world, students get naturally motivated to understand not only about Japan but also about other countries and cultures.

Motivation is a tricky thing: you can’t teach it. But you can provide a setting where it arises on its own. KCP, with its exceptionally dedicated mentors, mandate for all-Japanese-all-the-time, and multi-cultural setting, has found a winning formula for accelerated Japanese learning.

Tomohisa: A trip in Thailand was very challenging and fun. Since for much of the trip neither English nor Japanese were useful, I was able to channel the experience of my students. Finding my own ways was quite an adventure.

Walking through traditional downtowns for hours visiting temples and feeling the breath of the country was very stunning and absorbing. In the Thai language I knew only “Hello” and “Thank you.” It’s amazing how well those two words helped me communicate with people in town. I thank the patient, accepting people of Thailand! I also had the great joy of encountering some graduate students and people whom I know in the country. Unexpected reunions bring a sense of magic to a journey.

Describe a time when you felt especially proud to be part of the KCP International team.

Tomohisa: Study at KCP is exceedingly intensive, which makes this place the best place to learn for those who are serious in studying Japanese. One day in the main office building I witnessed students from quite a few different countries all naturally using Japanese as common language in the school in their daily life—to each other and to KCP faculty and staff.

This has been repeated many times, but on this particular day, I first felt the supreme satisfaction of having helped these students make a sustained, deep cognitive effort to extend their language abilities well beyond what they thought was possible. It was powerful and remains so, every day!

It is also my profound pleasure to hear from students who completed their study at KCP that their study abroad experience was very memorable and productive even though they faced ups and downs in their study abroad life in Japan. I am glad to have taken part in such an important time in their lives.

What does the future hold for KCP International - any exciting new programs to share?

Tomohisa: KCP has just built a fabulous new main building on its campus. Of course it adds more space, which means more opportunities for new programs and expansion. Some of our new ventures include a program in teaching English as a second language, bringing more Japanese classes on campus, and faculty led programming. And the new building includes both a tea-ceremony room and a lovely rooftop garden, for a quiet retreat.

Tomohisa: I think the absolute most important factor in succeeding at what we do is our faculty and staff. They are by far our most important resource. The support staff is incredibly responsive to the needs of students—whether they are trying to attend an unusual event and need help, are sick and need medical care, or have some housing issues.

The teaching faculty receives the absolute highest marks from students for dedication, kindness, teaching ability, and focus on each student’s individual challenges. These are the components that KCP alumni mention the most frequently when describing the benefits of the program: that the faculty and staff really make it possible for students to achieve astounding Japanese language proficiency

Head over to Tokyo to study Japanese! The KCP International Japanese Language School is multicultural and offers an Intensive Japanese Language course and a Japanese Culture and Society course. Between classes, students can take part in cultural immersion activities. These may include a tea ceremony...