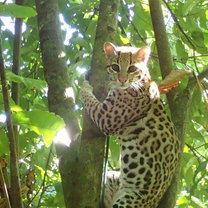 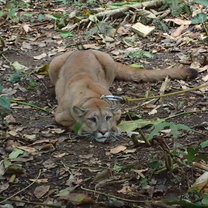 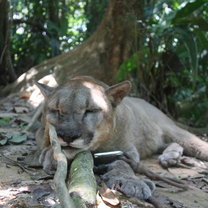 Gato, a wonderful puma who was rescued at age 4 from a circus, where he was so abused he couldn't stand or walk. He was rehabilitated at the sanctuary and spend the past 18 years living happily and going for daily walks in the jungle. 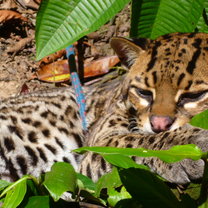 Tigre, an ocelot at the sanctuary who loved to get me lost in the jungle 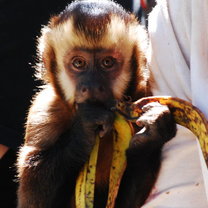 CIWY is Bolivia’s leading organisation in wildlife rights and care. For more than 20 years CIWY has cared for rescued wildlife, given disadvantaged youth a sense of purpose through involvement with animal care, and raised awareness about conservation issues.

Our largest focus continues to be aiding animals affected by the animal trade, although in more recent years we have focused more of our attention on preventing the illegal animal trade that is the culprit behind the need for our work.

As Bolivia’s leading organization in wildlife rights and care, we hope to make drastic changes in our country’s view of wild animals and make strides in ending a cruel trade that removes them from their natural homes.

We currently manage three parks - Machía (Cochabamba), Ambue Ari (Santa Cruz) and Jacj Cuisi (north of La Paz) - that operate as Wildlife Custody Centres and where we care for over 400 rescued wild animals.

I volunteered for 6 weeks at Parque Ambue Ari of CIWY. It was the most amazing experience. I was challenged daily to step out of my comfort zone, and was rewarded with friendship, wisdom and a connection to these rescued animals. In the USA I never would have had the opportunity to walk a jaguar or clean the cage of a tapir. A one-of-a-kind experience!

What would you improve about this program?
More fresh fruit and vegetables for the volunteers

This is a genuine charity that tries it's absolute best to better the lives of animals rescued from the black trade. The conditions are challenging but the rewards make it worth it. You know that what you are doing is making a difference. It's hard work - the humidity, the heat, the insects, no hot water, no electricity BUT the people and the animals make it best experience I have ever had. You make real connections with the animals and although this are frustrating - mainly because there is not enough money to do everything that we want to do for the animals, everyone's intentions and hearts are in the right place and have undoubtedly saved and improved hundreds of animals lives.

I have volunteered at parque Ambue Ari, one of three parks run by Communidad Inti Warra Yassi, twice now. The first time for two months and the second for just over three and I have loved it so much. These parks give you the opportunity to form such a special relationship with the animals you work with, a unique relationship. You would be assigned an animal and you work with them for the duration of your stay.
I have formed a very close relationship with one puma in particular, a female called Yassi. I worked with her on my first visit and then was given the opportunity to train new volunteers to work with her and her sister on my second time round. I'm quite certain they remembered me and we have a very strong friendship. It seems strange to say that you're friends with a puma but it is the truth. There is give and take in the relationship, there were days when I know she looked to me for reassurance and comfort and there were certainly days I looked to her for the same and she would always provide. I so looked

Aside from the cats, you also will make some amazing human friends too. When so many like minded people come together, from so many countries, something special is bound to happen and it really does. I will keep friends I made there for the rest of my life.
Its not an easy life to live but it is made worth while every day by the people and animals you spend your time with.

Go to the Communidad IntiWaraYassi facebook page to have a look at videos from all three parks.

What would you improve about this program?
Its hard to change anything because the whole place is run to the best of what we can on the money we have!

From pushing branches aside while walking off-trail in the jungle with an ocelot or strolling with a puma, to cleaning, feeding, enriching, and interacting with primates, every day brought something new. I utterly respect the way this sanctuary runs. They take in ex-pets and other rescues and provide as wild of a lifestyle as they can. It's incredibly hard work, but also such a memorable and rewarding experience. You only have to stay for 2 weeks to work with the capuchins, or a month to work with a cat, but I would highly recommend staying as long as you can. They are volunteers that have moved in and lived there for more than 5 years.

What would you improve about this program?
The living situation is typical for a developing country, and definitely far from luxury. There will be a cold shower or a missing shower some days. But, those are also memorable days, since you and your friends jump into the pool in the hotel next door, or take a bucket and shower outside and hope no one walks past.

Tigre, an ocelot at the sanctuary who loved to get me lost in the jungle

Gato, a wonderful puma who was rescued at age 4 from a circus, where he was so abused he couldn't stand or walk. He was rehabilitated at the sanctuary and spend the past 18 years living happily and going for daily walks in the jungle.

hi thought i should write a review about my time at ambue ari one of the 3 parks of inti wara yassi.
i first hears about the park from a friend when i was living in the uk she was allways going on about this jaguar of hers so when i finaly got to south america i had to check it out.
ambue ari is 6 hours from santa cruz and 4 hours from trinadad personaly i would go there via santa cruz due to there is not that much to do and see in trinadad.
upon arival at ambue ari i was met by very friendly welocoming people and was showed the camp and given a quick run through how the park worked.
then i met gill the park coordinator and nick the cat coorinator who ran me through regestration, work and saftey guidlines of the park.
the next day i started worki had the howler monkeys in the morning and a puma named maggie in the arvo.
i was blown away by the level of interaction with the animals so much by the end of my first month i cauldnt leave so i stayed another month and met 2 more cats lazy cat and wayra.
the lvel of intraction just got higher and higher the more time you spend with your animal the more you both will get out of it the minamal stay to work with a cat is 4 weeks but if you can stay longer your experance will double .
so much tht after 2 months i desided to stay longer i ended up staying there for 6 months in total.
and got to work with thw howler monkeys, lazy cat, maggie, engine, roy, tupac, the sisters, wayra, amira, katie and carlos
i had the most amazing experiance there and i am planing to do it all again soon.
you will hve to ruff it abit living conditions are basic there is no electricty so candles and head torches are used.
there are showers and toilets in camp and you will be sleeping in doorms.
but i think it all adds to the experiance you dont go to the jungje and stay in a five star resort do you!
there is car and moblie phones in case of a emergancy but there hs never been one in the past ten years of the parks operation.
the hole time i was there i did not see anyone come back badly injured there are stricted saftey proticals, and routines you will have to follow as well s alot of training on how to work with your animal so dont let fear stop you from this experiance.
your day will start early with morning camp tasks before breakfast. after breakfast you will hed out to your animal depending on what you are asighned you may have one to three animals in a day.
lunch is at 12:30 and you will get a break till 2 pm then you are bck out with your animals till 5:30 dinner is at 6:30.
your daily ativities will include feeding, walking, cage and trail maintance, enrichment, and a lot of fun for you and the animal remember you are there for the animal not the other way around.
after work there is a cafe one one of the edges of the park were you can go and have a beer or two.
ive been traveling for the past six years now and this was by far the best thing i have ever done trust go and do this you will not regrete it.

any questions feel free to send them through
friday night is party night were you can get s drunk as you like cause saterday is your day off to do as you wish . 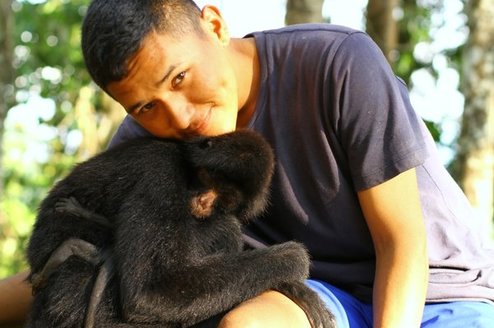 Volunteer with rescued wildlife in Bolivia at one of Comunidad Inti...