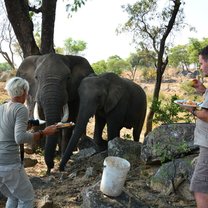 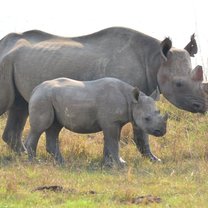 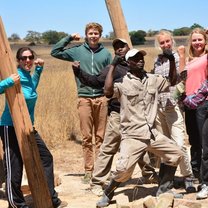 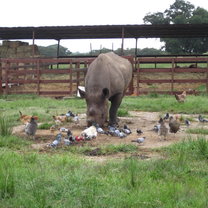 Rhinos are guarded for their protection from poachers. They're always happy to grab a little chicken feed. 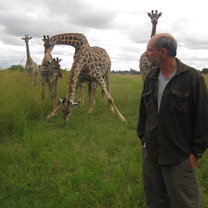 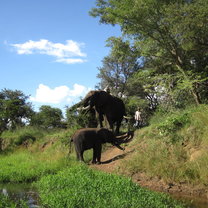 elephants with their handlers (we got to work with them too) 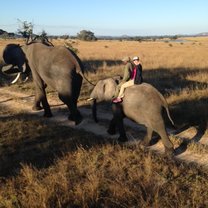 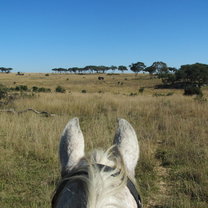 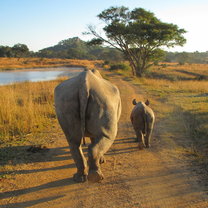 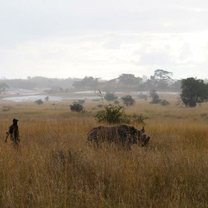 A rhino and his guardian angel. 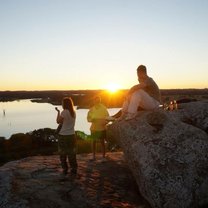 View of the sunset from the top of the balancing rocks. 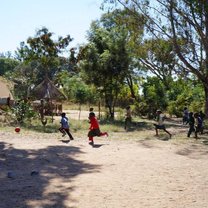 Kids playing at the local school we visited to create awareness about the importance of preserving our wildlife. They had so little and were still so sweet and happy. 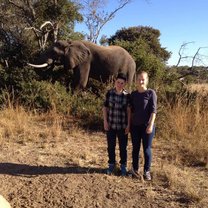 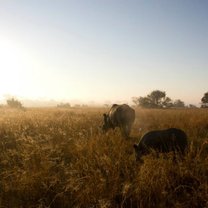 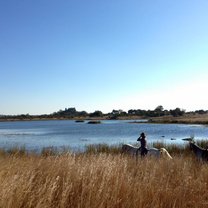 Imire Game Park began life as a cattle, maize and tobacco farm in the 1950s. During the 1970s, Imire made a name for itself by bringing significant numbers of game animals back to what was formerly under-used farmland. By the mid-1980s, during a period of Zimbabwe's worst rhino poaching, seven orphaned baby black rhino were translocated to Imire for their safe upbringing and the Imire Black Rhino Breeding Programme began. During the last 30 years there have been 14 black rhino born on Imire, with 11 returned to National Parks across Zimbabwe.

The Imire Volunteer Programme was established in 2005 and today provides valuable manpower to the conservancy as well as giving volunteers a unique opportunity to experience hands on wildlife conservation, focusing on the protection and security of black rhino and African elephant.

Imire is absolutely, unequivocally magical. I participated in the volunteer program for 3 weeks and it was a life-changing experience. Whether working with the community (and especially the local schools), interacting with the animals or just contributing to this amazing conservation project, the work is so rewarding and presents an incredible opportunity to learn about yourself, the world around you, and most importantly, what unites all people. You work hard, you play hard, and you make memories that will last a lifetime. I've visited over 40 countries in my life and this is one of the most special places on earth. Imire is incredible beyond words.

What would you improve about this program?
If you're headed down there, some supplies are hard to get in Zimbabwe. The school always needs new laptops and educational material, while the volunteer lodge could use some board games, a few badminton rackets, and a kitchen knife sharpener. I'm sure everyone would really appreciate you bringing a few things down! :)

The volunteer program at Imire has been my favorite experience out of the 35+ countries I have traveled. Better than any safari. Every morning on my walk, I was accompanied by either African elephants or Black rhinos. I got to feed them, pet them, care for them, and bathe the elephants in the lake. The volunteer house was beyond expectations and is located right on the lake with beautiful views, good food, and an accommodating staff. At night you can hear Mumbo the lion roar.

What would you improve about this program?
I would not have changed a thing. It is a good program.

Going to Imire was a life altering experience. It is breathtakingly beautiful and manned by generous and extraordinary people who lovingly watch over and provide for the animals in their care. Being with the wise and gentle elephants and the naughty and treat-loving rhinos is beyond amazing and such a privilege.

If there is anyplace in the world where hope for the future lives, that place is Imire!

When I started travelling in Africa I told myself I would never go back to the same place twice. I was at Imire in Oct. 2014 and I'm going back in Aug. 2016. How could I not return to that little bit of heaven on earth?

What would you improve about this program?
There was not one moment of one day that I would change.

I loved this program. Spending time with local people, working and being with the elephants and Rhinos was amazing. The program is sort of a cross between a resort and a volunteer experience: Rooms are dorm style but there's a pool, delicious meals and laundry service. They limit the group to 10 people so you get a lot of hands on contact. There is some hard work (eg cutting trees with machetes) but not more than 1-2 hours a day. One of the ways that the program really serves the community is by providing jobs for 15 or so local families.

What would you improve about this program?
The time spent at the local school could have been organized better. But overall the program was great including the school visits.

elephants with their handlers (we got to work with them too)

Rhinos are guarded for their protection from poachers. They're always happy to grab a little chicken feed.

I searched long and hard before settling on Imire. I wanted to do a lot of riding but also wanted to be able to volunteer in a more hands-on way and contribute to a great cause. This programme was the perfect mix of both.

The horse riding was so much more than I had ever expected. Judy was just awesome. Her knowledge and love of the conservation park (and her horses!) came through on every single ride. Her expertise in even the smallest of details was incredible and she put a real emphasis on ensuring that each ride had a purpose while being fun and exciting. Two of the best rides were the cattle driving rides. We got to ride all over the park driving cattle and making our way over some of the most beautiful scenery I have ever seen.

In addition, the staff at Imire were great in accommodating the riders so that we could also do all of the great volunteer work that others were doing. I helped take down fencing, build part of a road and spent time with the local school children teaching English and playing volleyball! I also spent tons of time with the park's truly wonderful treasures - the rhinos and elephants. I also got to spend a little bit of time with the anti-poaching team - one of the real highlights of my trip! 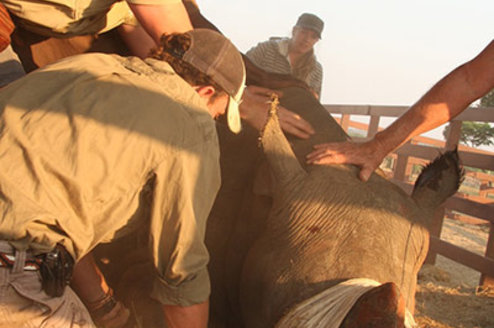 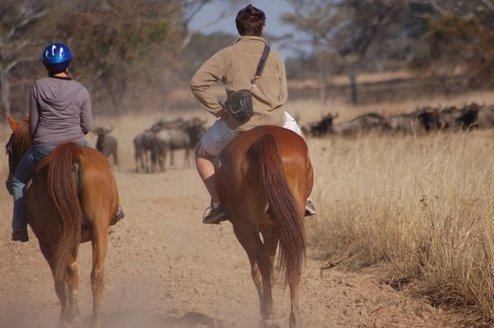 A unique and exciting programme combining horse safaris with valuable...

Jennifer Slaymaker 26 visited Imire for 2 weeks in September 2012. She is from Essex and currently works as a Duty Manager and Swimming Coordinator at a sports center just outside Cambridge. She enjoys traveling and seeing the world!

Why did you decide to volunteer abroad with Imire in Zimbabwe?

I had been to Zimbabwe on ALERTS Lion rehabilitation project for two years previously and had loved it!!! I decided that I should try something new in Zimbabwe and started to look into different projects.

I have always loved rhinos and the project looked like something I’d enjoy. Once I looked further into it, I came across the videos ‘There’s A Rhino in My House.'

It gave the background story of the poachers that came in and killed rhinos, leaving baby Tatenda motherless. It showed how the Travers family took care of Tatenda, especially Judy.

The care and love that the video showed immediately drew me to the project. I liked the fact that it was a family run project and that they had such a passion for what they were doing.

The more I researched I realized how varied the project would be especially with the elephants, lions, hyenas, and game around the park. So I signed up for 2 weeks at Imire in September 2012.

Tell us a little about Imire and your role at the company.

Imire was begun as a farm in the 1950s by a Zimbabwean conservationist whose vision was to see Zimbabwe’s wildlife restored to the great levels it was in the past. He understood that game, including rhino and elephant, can thrive on what was previously just cropping and cattle farmland and that the community around conservation areas like Imire have a massive role to play in returning wildlife to the Zimbabwe bush.

Our vision is to show rural communities the benefits of game corridors and how they can use sustainable farming practices to improve their financial security as well as the well-being of the wildlife and environment they live in. My role is to create awareness of the situation concerning conservation in Zimbabwe, especially that of the black rhino and to show volunteers the real tangible impact of what they can achieve by volunteering at Imire, or even what they contribute by coming to Zimbabwe as tourists.

I worked in marketing for 12 years in the UK before deciding to take a career break in 2010 and going travelling. Whilst away, I volunteered on two wildlife conservation programmes in South Africa and did a FGASA Level 1 Field Guiding course - which sparked my interest in conservation and tourism marketing in general.

I then travelled through Mozambique and Zimbabwe and ended up helping at the lodge on Imire for 18 months, which is where this volunteer programme is based. It was all an adventure to get to this point and I am determined to get as many people as possible to experience Zimbabwe and Imire for themselves!