OTZMA is the PREMIER ten-month-long, high-quality fellowship for college graduates, aged 20-26, which combines volunteering, leadership development training and internships in locations throughout Israel.

DEVELOP yourself as a future LEADER in your field, community and society with cutting edge leadership training seminars. Make a real DIFFERENCE to Israel through meaningful service and volunteering opportunities. EXPLORE the beauty and excitement of Israel- hands on!

I signed up for Project Otzma looking for an inexpensive way to spend a year after college learning and adventuring overseas (in Israel), and it turned into one of the turning points of my life. Billed as a leadership development and volunteer program, I looked forward to teaching English and working with kids, with time to adventure and explore the country on top. The educational and leadership curriculum organized by the staff and facilitated by outside professionals added so much value to the program, it make me re-consider my professional goals and helped me find my life's calling.

Otzma arranges three 3-month sections, starting with language immersion courses and a few hours of volunteer work per day, moving onto full-time volunteering in one of several dozen communities across the country, and a final stretch of working on a kibbutz, serving in the army or doing some kind of internship. Each three-month chunk is peppered with enrichment events, either with the entire group or locally in the base city. Attendance at large-scale educational and networking events were also very common.

One of the best things about Otzma, aside from the attentive staff, is that the program organizes all the logistics you can imagine-- apartments, transportation plans, food stipends, curricula-- all you need to do is show up and jump in. Definitely among the best ways to spend a post-college year!

What would you improve about this program?
Work a little more closely with local programs to ensure quality and coordination for participants, on-site.

Its been almost 20 years since I was on Otzma and yet my experiences impact almost every aspect of my life. I had the fortune to be there during both times of war and peace - and yet I never felt safer. I learned to speak Hebrew, not only in Ulpan, but from Ethiopian teenagers! I prayed in a synangogue where the 8 Oztma volunteers were the only caucasians in the shul - and we knew the least! I spent Simchat Torah at the Kotel, and danced with thousands of Jews in the Old City. I met real family, and I became family with my host family - they took me in and took me on vacation. I fell in love - with a man, with a city, with a country and with a people. Our people! Its an experience that has defined me. I would recommend Otzma to anyone who is curious about Israel, curious about the Middle East, curious about Judaism or curious about themselves.

Going on OTZMA was the best decision I ever made. I met some of the closest friends I have today, had some of the most unique and wonderful experiences of my life, and found my future heading in a new and exciting direction. They do a great job integrating you into the society and exposing you to all sides of Israel, letting you make up your own mind about what to believe and feel in a way other programs don't. A life-altering program that I'll always remember!

The overall experience on OTZMA was incredible and I would whole heartedly recommend it to anyone who is interested in such a program.

As a participant, I would simply recommend saying yes to everything. They say the more you put into it, the more you get out, and that was certainly true from my experiences.

Having never been to Israel before, highlights for me included seeing all of the sites, education seminars with people you wouldn't normally have access to hear speak and the freedom to do as you wish in Israel.

I spent ten consecutive months without being bored. Ever! Think about that.

If you're willing to throw yourself into something new with an open mind and a can-do attitude (along with incredibly friendly and helpful support from staff) you will have an adventure. I certainly did.

One of my favorite times on the program was the winter I spent in a small town called Kiryat Shmonah in Israel's north. Here was a typical day: wake up early, walk to the local elementary school to teach English, get coffee with some Israeli twenty-somethings studying at the local college, help teens collect costume donations for a Purim community fundraiser, shop for fresh veggies at the market, make a beautiful fresh dinner together with my room mates, try to bum a ride to a nearby kibbutz pub, and finally hit the hay, exhausted and happy back at the cozy apartment the three of us shared.

This was the day-to-day adventure. OTZMA also planned fantastic several-day education days and trips to supplement the important social work I was doing.

I work at a Hillel and recommend OTZMA to each graduating senior. And now I recommend it to you! 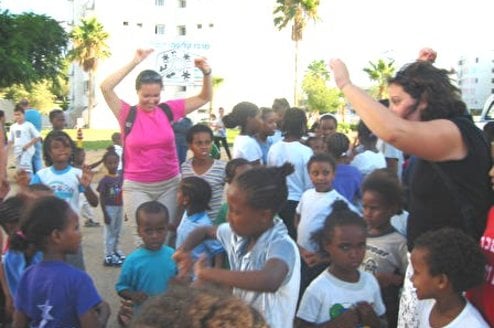 OTZMA – It’s your life. Use it well. OTZMA is the PREMIER ten-month...

Program
OTZMA: Live and Volunteer in Israel
Sarah Greenberg is from Greenwich, CT and currently is travelling the world with her fiance for pleasure, while working with an Africa-based NGO for satisfaction. She attended McGill University and the California Institute for Integral Studies and will soon return to the San Francisco Bay Area to resume her career as a Psychotherapist with an integrative mind-body practice. Of late she has a been a seeker of adventure, such as climbing a couple of mountains, scuba diving with an elephant, and paragliding over the Himalayas. 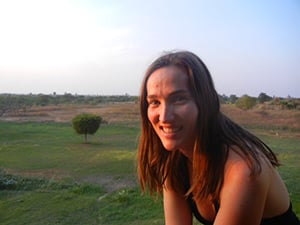 Highlights: OTZMA was such a meaningful and varied experience in my life that it is impossible to choose just one or two highlights. I learned what my passions were when money was taken out of the equation. I learned and worked in a new language. I stood beneath waterfalls, hiked for days through the desert, swam in the Dead Sea, and danced all night at a party inside a deep desert crater. I lived for a month in Jerusalem, a city of such political, historical, and spiritual significance. That city has a palpable soul that never ceased to affect me, and make me feel more alive. I was immersed in a culture that is warm and embracing. I got informally adopted by an Israeli family, and made incredible friends. I got to experience ten months of consciously thinking beyond myself, and helping however I could. This has an immense impact on happiness.

I signed up for OTZMA at a crossroads in my life. A recent college graduate, I had prepared for a career in Finance, yet when I went to my NYC interviews at investment companies, my stomach tied itself into millions of knots screaming, "NOOOOOOO!!!". My time in Israel gave me the confidence, experience, and self-knowledge to take a different path, and that has made all the difference.

Morning: A typical morning in Ashkelon: Mornings in Ashkelon were all about language learning. We had about four hours of 'Hebrew Ulpan' each morning, and these were held at the immigrant absorption center where we stayed, so it was a treat to roll out of bed, make some breakfast, and already be at class. After three months, coming in with zero Hebrew, minus the ability to sound out words, and sing the alphabet, I became proficient enough to work with kids who only spoke Hebrew. The teachers were fantastic and taught us about Israeli history and culture while teaching the language. After class, I almost always managed to squeeze in an hour of beach time (we lived just a ten minute walk from the Mediterranean) before an afternoon of volunteering.

Afternoon: My schedule in Afula was full and wonderful. Since there were few volunteers in the region, and more need there than in many areas of the country, the three of us in Afula had endless opportunities to get involved. Most afternoons I went to a school created for kids with Cerebral Palsy, and helped run their therapeutic art program. A couple times a week, I accompanied them to a therapeutic horseback riding program which was incredibly successful. Several of the children I met could not sit up on their own prior to the horse riding, but the horses motivated them, and riding requires core strength. After several months they gained the strength to sit upright, and received much joy from their time with the animals.

Evening: In Ranana, I had two internships with OTZMA: one doing research and writing articles at the International Institute for Counter-terrorism, and another working with the Yoga Teacher's Society of Israel. The two experiences really balanced each other out! In the evenings, my friends and I would get home around the same time, then go into town for dinner, cook together, hang out with others in our building, or go to the nearest beach for sunset. There is a great sense of community within this program, and within Israel as a whole.

Tell us a little about OTZMA and your role at the company.

OTZMA is a 5 or 10 month program that offers an unparalleled immersive experience by providing volunteer, community service and professional internships opportunities for each participant in 3 different communities across Israel. Backed by 26 years of success, the varied living experiences, top-notch and engaging educational program and exclusive Israeli adoptive family initiative provide an unbeatable opportunity for young adults to experience Israel, make an impact and reap the personal and professional benefits. My position at OTZMA is the North American Director, and I’m based in New York City.

I can’t remember a time when I didn’t want to work in social services. I was a participant on OTZMA after I graduated college, received my masters in Non-Profit Management and have been working in the field ever since.