This program was kind of the perfect happy medium of time spent abroad. I got to get a good sense of the culture and way of life in Paris as well as having time to explore other countries and places in Europe. My class was challenging, but I learned a lot about the formation of the European Union and its current politics. My research projects gave me the freedom to explore my interests, but also get one-on-one guidance from renowned professors and researchers! This is an experience I recommend to anyone who is interested.

What would you improve about this program?
I just wish I had more information about what the class and requirements would be like, but it all turned out okay.

Taking the summer art history through Paris Museums July 2017 was the experience my heart has been longing for! At 48 years old and 27 years out of college I was not sure this would be feasible; the cost, application process, housing may seem daunting. But AUP is a wonderful and supportive place for adult learners and this 3 week immersion into art history was so incredibly dynamic, every class took place in one or 2 museums, and the professor was amazing. Our class was 20 interesting and fun undergrads from all over the world, and we really bonded running all over Paris together and sharing our experiences out of class.
I chose an Air B and B near campus, and with a 30% monthly discount I had a nice 1 bedroom flat to really enjoy the Paris experience.
I am just a High School Nurse with a love for art and travel. Anyone who is considering this... You are worth it! This experience will change your life and give you a new lens on art and architecture forever. It has inspired me to enroll in ART 100 at Cape Cod Community College this fall......It was worth every penny and challenge and I plan to do it again!

What would you improve about this program?
With a little more advance knowledge of the physical demands of the class I would have been able to prepare for the walking and pack better shoes:) I was exhausted after every class, we all were, water and snacks were essential to get through the hot summer afternoons on the go!

I absolutely loved my time in Paris at the AUP. The teachers at my summer course were amazing and truly inspirational. The contact hours for the course were perfect because it gave me lots of free time to do the assignments as well as enjoy this beautiful city in summer.

Everyone is really friendly and I had so much fun spending long evenings with them visiting outdoor cafes and art galleries or just strolling down the Seine.I would recommend AUP to anyone who is interesting in an authentic French cultural experience.

What would you improve about this program?

If there are any "troisieme age" people out there who are considering the summer session with AUP I heartily recommend it.
I took the three week Art History Class and loved every minute of the instruction. We totally covered, in the museums of Paris Art from the early Egyptians to the most Modern.

A friend and I found a very nice air BNB apartment in an interesting Paris neighborhood and that of course added much pleasure to our trip. If anyone would like further information don't hesitate to email me: nancynaca@aol.com

I certainly loved being in Paris, and studying Paris through taking classes. My class was an on site class, in which we would travel to various historical sites in a day, learn about the history and architecture, and compare them to other sites we had seen. The class was absolutely amazing. The downside was the housing. I had applied for a single, thinking the doubles would be small because they would be European, and I believed that they would all be in the same building. Instead, singles were in a dorm of another school, and apartments were spread throughout Paris. There was no warning of this, and I felt extremely isolated because of it, because even with the singles, there were nine of us, and rather than having us all together, we were again spread out throughout the entire 300 room building.

What would you improve about this program?
Housing, as said in my previous statement, needs to have more information present so students know ahead of time what they are getting into. 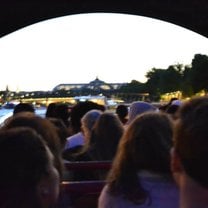 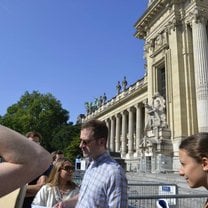 Deciding to spend last summer in Paris at AUP was the best decision of my collegiate career. From the Comforts of Home to the full Parisian immersion, the whole experience was everything that I wanted it to be and more. The academics were stimulating, the cultural excursions were all-encompassing, and I made some of the best friends I’ve ever had! The entire faculty made me feel so welcome in a new place, and inspired me to take advantage of every opportunity with which I was presented. The program was educational both academically and culturally- I would go back in a heartbeat. I would highly recommend spending a summer at AUP to anyone who who asked!

What would you improve about this program?
There should have been more levels of French Immersion! So that people at the highest level don't have to repeat the 4th level twice.

I spent my summer in the French Immersion program at AUP back in 2014 and LOVED it. Two years later, I still talk to and see my friends and have countless memories and stories to cherish. One of the best decisions I've made!

You are in one of Paris' nicest neighborhoods, housing is a bus ride away and located in a quite and traditional neighborhood. This lets you experience Paris at its best. You'll be a local for all your other visits after your summer at AUP!