Skip to main content
Haley Pope is a 23 year old, female from Atlanta, GA. She attended Elon University in NC, USA and is currently looking for a conservation job in the United States for a few years before hopefully returning to South Africa to complete her MSC in Conservation Biology. She volunteered at Hluhluwe iMfolozi Park; and Tembe Elephant Park. She enjoys the outdoors immensely, being active with sports and exercise, and is passionate about photography, conservation, and social justice. 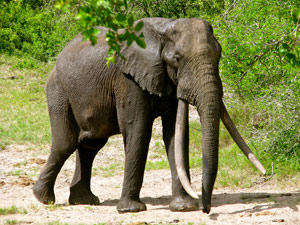 Morning: During my time with Wildlife ACT, mornings consisted of waking early, somewhere between 3:30 – 4:30 am and grabbing a quick breakfast or snack before hitting the road in the open-topped vehicles for around 4-6 hours. These times varied depended on which park I worked in or the distance we needed to go that day to locate the wild dogs.

While this was extremely difficult at first, I grew accustomed to those early mornings and soon looked forward to waking up, having the chance to be in the park before any of the tourists, and to watch the sun rise over the mountains or woodlands – something many people rarely get to witness. There is just something extremely special about African sunrises and sunsets that is impossible to put into words – it has to be experienced. Those early mornings, as hard as they might be were never taken for granted!

Afternoon: After the early morning drives, we usually were able to take a short break. Volunteers would then either make breakfast if they hadn’t already eaten, read, take a nap, or just relax with the volunteers and staff.

On some occasions these breaks didn’t last long or would be cut out completely. Instead, we would go on other game viewing/monitoring drives for elephants (Tembe National Park) or cheetahs (Hluhluwe iMfolozi Park). The elephant drives would take around 3 – 4 hours usually and we were able to see some of the most amazing elephants in Southern Africa. For instance, one of the first elephant monitoring drives, we saw the largest tusked elephant in Southern Africa – 2.9m long each!

Once a week at Hluhluwe iMfolozi, we left early in the morning and traveled around the entire park to check on the cheetah cameras, replace batteries, and collect the camera chips so that the images caught on film could be viewed and identified. This usually took the majority of the morning and afternoon. On occasion cheetahs were seen in person, while other times they were only seen from the captured photographs. Either way, it was very rewarding! Returning from these afternoon drives between 2 and 3pm, we usually had a couple hours of relaxation to eat, etc. before heading out for the night drives.

Evening: Evenings as a volunteer were typically similar no matter what park you were in. We would leave the camp at around 4pm and head out to locate the dogs again returning around 7 or 8pm. Since they are most active during the dawn and dusk, this is why early morning and late night drives are so important for locating them. Often times in the evening the dogs could be seen on a hunt! They would stroll out into the middle of the road where we could see them clearly before darting back into the thicket after locating prey.

While in the vehicles, we were in constantly in charge of using the radio telemetry devices, swapping around so that everyone had a chance to use them and learn how exactly they worked. We would hold the devices above our heads and carefully listen for the unmistakable “beep…beep…beep” of the telemetry signal once the dogs were found in close proximity to the vehicle.

Highlights: The highlight of my experience while with Wildlife ACT was being able to get unbelievable up-close and personal with the wild dogs in Tembe Elephant Park. On several occasions, the dogs would come lay out in the middle of the road relaxing until the scout of the pack would inform the others of a located prey animal.

They were so beautiful to watch and as they are basically harmless to people and exceptionally inquisitive, you quickly form an attachment to them and become emotionally invested in their survival. One instance specifically, I witnessed an entire wild dog hunt, from the time they located the prey and heard the scream of the animal being taken down, to the feasting and settling down for the night after a great meal!