Skip to main content
Sonja Blum is from Johannesburg, South Africa and runs her own accounting practice. She has always had a great love for animals, nature and the environment and loves the outdoors. Morning: Most mornings we woke up before the bird did, and I expected that as I don’t usually get up easily in the morning that this would be a problem for me, but I was wrong, as every day was so exciting we all couldn’t wait to get on the back of the bakkie/ute/van and go to experience another adventure. We usually started the day at 4:30am to leave the camp by 5am (sometimes for special events we left earlier) and started our monitoring of the African Wild Dog Pack to try and locate where they were and what they were getting up to.

We’d drive around the park and use the telemetry equipment to locate the collars around the alpha females neck. In between looking for the pack, we had the most amazing encounters of all of the african wildlife rhinos, giraffes, zebra, many many impalas, lions, elephants - you name it we probably saw it! The monitors were so wonderful in telling us their stories about their animal encounters and sharing their knowledge about these wonderful creatures. Their love for nature and the environment was clearly visible in all the monitors we had as they would tell us about the different vegetation that we came across and what their medicinal uses were (if any) and we were taught about the different animal dropping and spoor. It was really amazing how each individual monitor had so much to share with us. 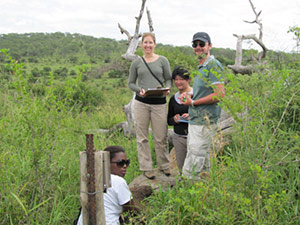 When we found the pack, we would sit and observe their behavior in the pack. We were lucky enough to spot them sleeping alongside the road so we could see them perfectly and observe their beauty. We were trying to see who the alpha male was in the pack as it was a newly formed pack and the roles hadn’t been clearly defined and as it was mating season this would now become evident. To the monitors' surprise, the female they had suspected was the alpha female (lead hunter), wasn’t and the youngest female in the pack was the alpha and the oldest male was the alpha male, the strangest combination.

It was truly a magical experience getting to follow this pack around. On the days that we didn’t monitor the pack we got to change the batteries and the SD cards in the stationary cameras that were disbursed in the park for a specific cheetah census that was being done. It was exciting being able to step out into the bush, knowing that wild animals were not far from you, and knowing that by what we were doing we were contributing in a tiny way to research and conservation.

When we returned to camp we could then either catch up on a little sleep, wonder around the camp or spend some time going through photo’s or whatever our hearts desired. We were however also give the task to consolidate the data capture on the various camera’s for the previous leopard census, that we had to complete as a team at the end of our stay at HIP, so we did that in our own time at our own pace.

Afternoon: Usually the afternoons started at about 2pm when we got back into the bakkie/ute/van and continued monitoring for the wild dogs. If we were changing the cameras that day, we would cover the entire park and would set out early in the morning to be able to get across the park to all the cameras. Generally, we would not monitor during those days as our Pack (Crossroads Pack) generally resided in the HluHluwe side of the Park. On one occasion though we were asked to monitor for the other packs in the park on one of our camera days. We would generally return to camp by about 5pm to start preparing supper and lunches for the next day. 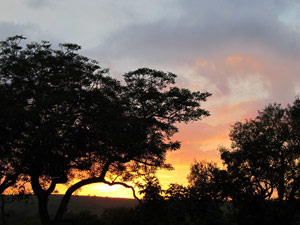 Evening: The evenings were spent preparing food for the night and the next day and making sure we were ready for the early wake up the next morning, but also we got to socialise and chat to all the other researchers in the camp, as they too were preparing food in the communal kitchen. It was so interesting learning about all of their research and the projects that they were doing and what they were finding out. These are all such passionate people and all so willing and open to share their stories.

The people that reside at the Research camp have built up a great little community and invited us into their community with open arms and we were invited to braai’s (bbq) and any other social gathering or event that they had organised. It was really awesome. Some nights were also used for us to be informed about things that we were going to be doing the next day so that we knew exactly why we were doing what we were doing and how it impacted the research and what exactly we were doing, what to look out for etc so we knew exactly what to do and why. 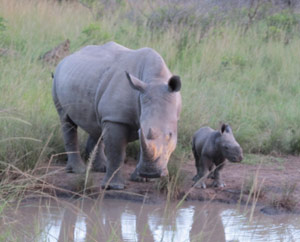 Highlights: For me, the whole experience was one big highlight - the people were warm, friendly, helpful, informative and caring. There are too many wonderful experience that I will never forget, learning so much about the African painted dogs, seeing a few month old baby rhino, being so close to nature and just having my appreciation for nature and the wonder of it reinforced again and again. My love for nature has just grown in leaps and bounds and I will truely never forget my experience in HIP.

Also it was great to meet other wonderful people from all around the world, and hear their stories and get to know them and befriend them. The whole packaged experience is just one not to miss out on. I will definitely return to the HIP Park any chance I get!! I miss the stillness in the morning before the sun comes up and the bird start waking up and the quiet in the evening when nature goes to rest, the unbelievable sun rises and sun set. It is just spectacular!