Skip to main content
Mandie Botinelly studied abroad in Aix-en-Provence, France from January 26-May 19 2013. Originally from Fort Collins, Colorado, Mandie chose to attend University of Hawaii at Manoa for its strong language program, where she studied French Language and Literature as well as Dance. A 23-year-old recent college graduate, Mandie's current profession is an English Language Teaching Assistant in Toulouse, France for the 2013-2014 school year. 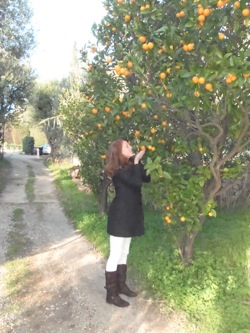 Mandie: I chose to study abroad with IAU for a number of reasons. For one, traveling to the South of France was something that I had always wanted to do. In this respect, IAU was conveniently located - in a small, safe city in the South with mild weather, friendly locals, and beautiful old architecture. The other aspect of the study abroad program that I took into consideration was what the school itself could offer me. My selection of IAU was final when I learned of their school-sponsored and academia-rich excursions to other cities in France, their small class size, and their language-immersion option of being in the French Honors Program.

Mandie: To describe the program socially, there were about one hundred students from all over the United States who did the program with me for the semester of Spring 2013. Knowledge of the French language is not required to do the regular program, so a good majority of students have options to take classes in a multitude of other subjects in order to correlate with their college major. IAU organizes activities at the beginning of the semester that make it easy to make friends, be comfortable in the city, and above all, adapt to life abroad. The faculty are approachable, engaging, and care about the progress of each individual student. Academically, as with any university, there are courses that are more rigorous than others. For me, I chose a balance of 4 courses and then an internship, for which I received class credit. The internships are open to any student who is interested in delving further into the French culture. That, to me, was an opportunity worth its weight in gold so I would definitely recommend it. There are so many to choose from for any area of study. I would say that the best part is that you get to meet the locals, who turn into friends by the end. 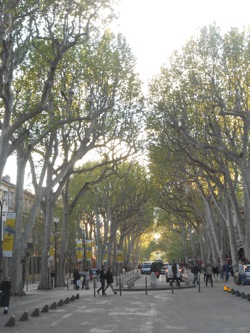 Mandie: Personally, I love everything about the French culture in Aix. You feel part of a community in so many ways. For one, it is customary to say, "bonjour" whenever you walk into a store. Another cultural tidbit about France starts with "b" and ends in "read". Even if you are not a huge fan of bread when you first get to France, by the end you will be wishing you could just throw out all of your clothes and pack 500 baguettes to take home in your suitcase instead. You will find yourself being way more experimental with all the different cheeses than ever before and, of course, all of the different wines. And don't even get me started on the pains aux chocolats and all the other tempting delicacies awaiting you as you walk into that first bakery...France is a treat for the eyes with all the sights and for the taste buds with all the food.

Mandie: It's hard to pinpoint one thing that I would change, since my study abroad experience was the best four months of my life and the best decision I have ever made. I would say though, that taking advantage of every single moment is really something any traveler should do. During the first week or two as you are adapting to the unfamiliar, there is always a little bit of uncertainty or fear of breaking out into unknown territory. I would recommend to not waste a single day in the comfort zone of your bedroom. Never stop exploring. You'll surprise yourself with what you discover.