Skip to main content
Jeremy Boucher is 18 years old and a senior at Leominster High School. Jeremy went to Ghana with GLA from August 4- August 21, 2013. In the future, Jeremy plans to take a gap year before his freshman year of college to figure out what he should do. During his gap year, Jeremy plans to go back to Ghana for six months to continue volunteer work.

Why did you decide to participate in a service learning program with GLA in Ghana? 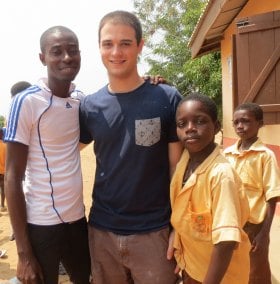 Jeremy: To be honest, I am not sure why I chose to go to Ghana with GLA. The opportunity kind of just came to me and introduced itself to me.

I was doing research about abroad programs for college and GLA came up and I was immediately interested in it. I wanted to look at the application and a administrator called me unexpectedly a few days later and convinced me to do it.

GLA helped me so much. I'll be honest--I was probably the most annoying person to them because I emailed them constantly.

I knew GLA would change my life no matter what program I chose. It just so happened that I chose Ghana, and it was the best possible decision for me.

Jeremy: Absolutely. It's amazing how two weeks in a developing country can transform your life so quickly. My mind was open to everything and I accepted that this is a part of reality even though it isn't my reality.

I never got home sick (sorry Mom and Dad) because they were so friendly. I was so jealous of how happy these people were with such a different lifestyle compared to mine that I was angry that I had to leave.

My worldview has grown so much. I appreciate everything I have, and when I see people who take what they have for granted it bothers me so much.

My director and mentors told me that once you get on that plane and you're on your way home, you'll get reverse culture shock. The moment I got to Amsterdam it was so different and upsetting. People would ignore you and be disrespectful.

After two weeks of complete respect and overall happiness in Ghana, you realize how lucky you are to have the life you have. 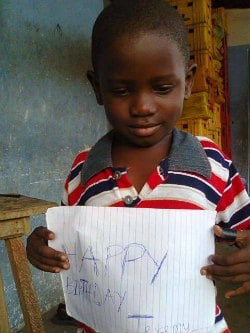 Jeremy: One person who changed my life completely was this little three year old named Godwin. He lived around the home base and would occasionally come during the times we were there.

I immediately had a connection with this kid and it came from nowhere. We would play soccer and hang around and he became my "adopted son" because he really liked me too.

I remember one day he was playing soccer for a while and got really tired and I could notice it on his face. His sister was telling me to get him water but I wasn't allowed to no matter how badly I wanted to. They tell us if you give one kid water they'll keep asking and I had such a guilty conscience for that.

I picked him up and put him on my lap and he passed out while he was sitting on me. I kind of freaked out and I didn't know what to do but one of the local staff members brought him back to his house and gave him water. I was so angry and I felt so guilty that it stuck with me even after I got home.

When I was leaving on the last day I was holding him and when I put him down he began to cry when I said goodbye. I decided to send over a box of clothes to him and he is getting them sometime this weekend and I'm so happy that I could do this for him.

What do you the miss the most about Ghana or your experience?.

Jeremy: The thing I miss most about Ghana is the people and mostly the kids. They have introduced me to a culture that I had very little knowledge about and welcomed me and the other students so greatly.

I know that it is hard for one person or a group of people to change the world in two weeks but I realized that even though I didn't make the biggest impact on these people, they made an even bigger impact on me.

I thought that I would know what I wanted to do with my life after going to Ghana, but I was there for such a short time that I still don't know. I decided that it is best for me to take a Gap Year and go to Ghana for six months.

I know that this will change my life even more than what GLA has done for me. I am so excited to begin another experience doing something that I love doing.

Any tips for someone considering this program in the future? 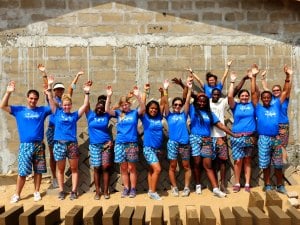 Jeremey: Advice that I would offer to anyone traveling with GLA is to have an open mind. You have the opportunity to take a break from your life at home and change your life in a positive way.

Don't bring any "emotional" baggage with you when you go down there because it will ruin the experience. If you have an open mind and accept life the way it is, everything will become clear to you.

Yes, things are very different in Ghana than it is in America or developed countries but accepting the difference is the most important part of the experience. Having no judgment and stepping out of your comfort zone is incredibly important for you in order to have a life changing experience.

Global Leadership Adventures opens up so many doors for your future and is a chance to change your life in a great way. The opportunities are there and anything is possible if you are passionate about it and dedicated about your trip.