Growing up in the Midwest, Rachael couldn't wait to get out and see the world. She's studied abroad in Italy and Thailand, interned abroad in Sydney, worked abroad in Australia and Fiji, and traveled to 30+ countries, including backpacking solo across South America. In addition to working in international exchange, Rachael obsesses over all things her blog Girl, Unmapped.

Rachael Taft, 25, grew up in Ohio and went to school at the University of South Carolina. Since graduating, she has traveled solo across South America, lived in Australia for a year, and worked as a journalist in the U.S. 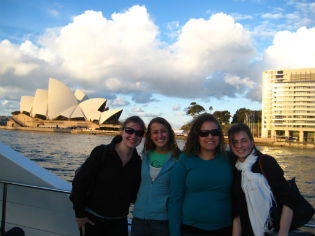 Highlights: Admittedly, the internship aspect of my trip only served to show me that I did not want to work in that field. (I had a PR internship, but I was studying advertising in school.) As for the overall experience, the people I met were definitely a highlight. I met some awesome people, who I am still good friends with four years later. I also loved living in Sydney - it is one of my favorite cities in the world. Traveling was also a highlight. I did a weekend on a sailboat in the Whitsundays, snorkeling at the Great Barrier Reef, and also visited Frasier Island and the Australia Zoo.

Morning: On a typical morning (Monday-Thursday workday) I would wake up around 7:45 or 8:00 and go down to the kitchen to have breakfast. Then I would shower and get ready, before heading out with a number of other interns to walk to the bus stop. I'd take a bus to the train (subway) station and take the train to North Sydney to go to work.

Afternoon: In the afternoon I was usually at work. I might be running errands, such as mailing packages at the post office, or likely I would be in the office working something at my desk. On some afternoons, toward the end of the day, my office would have "wine o'clock" and my boss would come around and pour everyone a glass of wine. I usually finished work around 5:00, though that could vary.

Evening: A typical evening would involve unwinding with friends in the kitchen and common area. Generally all the interns and other students living in our housing would be cooking in the kitchen and then hang out during and after dinner, just talking and having a good time. Afterwards, some people might watch a movie or hang out in each other's rooms. Some evenings we would go into the city for dinner, do some activity, or go out.

A breathtakingly beautiful coastal city, Sydney is an exciting and diverse place to study abroad with 120 nationalities and the rhythm of 250 languages spoken here. That means delicious foods from around the world fill the markets and there are international celebrations like Buddha’s Birthday...