Skip to main content
Jessica Brown attended CFHI’s Reproductive Health Program in Quito, Ecuador for 8 weeks. Jessica currently lives in San Jose, CA. She recently completed a 2-year Radiologic Technology program at Foothill College, has an associate’s degree in Radiologic Science and a BA in Sociology. Jessica aspires to merge her education and apply her knowledge and passion in sub-specialties of Radiology such as Mammography and MRI. 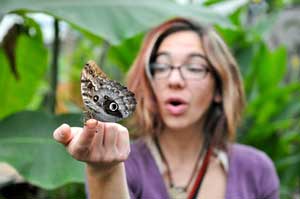 Why did you decide to intern abroad with CFHI?

Jessica: At the time I began researching CFHI’s programs, I had worked 5 years at a Reproductive Health clinic in Eureka, CA. I possessed a strong foundation and passion for women’s health so I chose the Reproductive Health program in Quito because I wanted to expand my knowledge of health care practices in South America & broaden my understanding of cultural attitudes towards sexual health in this country as well.

I also wanted to learn Spanish immersion style so the classes included as part of the program fee made it more attractive. My career goal at the time was to become an ultrasound technologist; although CFHI didn’t have a specific program for Diagnostic Imaging, I felt certain that the clinical rotations would put me in close proximity with the imaging department and hoped that if I established a rapport with my medical site coordinator I may be able to shadow a tech in the Radiology departments.

Overall I knew that I would take away an immense amount of knowledge from this immersion experience that could not be learned in a classroom setting in the states, so I went and I got so much more than expected. 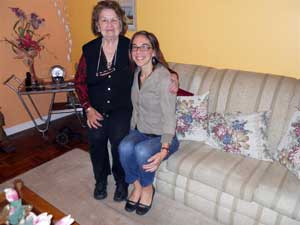 Jessica: Yes. I befriended a few native Quitenos who were my age and once my language skills improved I was able to communicate more effectively with my newfound friends. We had common tastes in music and art, so they invited me to events that they planned to attend.

Whether it was a concert in Parque Itchimbia, or an open mic night in a quaint club in Guapulo, or a lovely dinner at a favorite hole in the wall restaurant, I went along with them because I was genuinely interested in knowing them better and experiencing life through their eyes. Honestly it spared me the work of having to discover the good local spots on my own and taught me not to fear straying outside of what Lonely Planet advises people to do when they’re traveling.

Doing this also encouraged me to be independent and try new foods and places on my own, which is how I developed a palate for “mote” which was a mix of hominy, potatoes, onion, avocado and meat served for $1.25 at a stand on the street I lived on.

Jessica: Absolutely. I grew leaps and bounds over the 8 weeks I was part of the program. I arrived feeling overwhelmed by a huge, bustling metropolis and slightly intimidated at my clinic sites, but it was only because I was pushed completely out of my comfort zone and didn’t have a fluent handle on the language. I began the program with basic conversational Spanish skills. 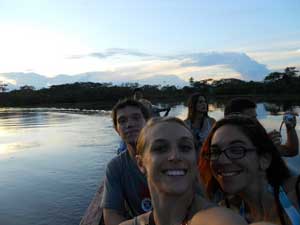 With each passing day I learned a huge amount in the classroom and clinic, and when I applied the new skills/knowledge I saw the results. I was more capable of communicating which helped me to better understand situations in the clinic, conversation between patient and practitioner, and I helped me to network within my clinic rotations. For example, if I wanted to spend more time in one aspect of the department the medical coordinator would send me to that ward and assign me a new preceptor.

Eventually I was able to advocate for myself and ask if I could spend time in the Radiology department; this worked out and I shadowed Radiologists and technologists for a couple days per week at each clinic site, in addition to working in the reproductive health ward. After the 8 weeks I went on to do another month of traveling on my own, to further explore Ecuador, and the life skills I gained from my CFHI experience enabled me to navigate around the country with confidence.

Jessica: There are countless experiences I could not have had at home, both in and out of Quito. One that sticks out is my trip with 3 other CFHI students to the Cuyabeno Jungle (part of the Amazon in eastern Ecuador). We took a 4 day trip to a village deep in the the Cuyabeno jungle, set back from the river by a few hundred feet.

We traveled by bus to the Cuyabeno river, then rode in a motor boat upstream for a couple of hours to the village. Our guide took us on several amazing trips to visit natives, among whom were medicine men and shamans. While there I received a shaman cleansing/treatment, I fished for Piranhas (and caught one which we ate for dinner), grated Yuca root to make tortillas, blew darts out of a blow gun, played with a monkey and a baby alligator, and went ziplining through the trees.

There were so many fun adventures we were able to go on over the weekends or time off from clinic & school; the nearby towns are only a few hours away so very accessible by bus and very affordable.

Observe, learn, and experience Ecuador’s healthcare system first-hand through CFHI’s multiple immersion programs. You will come away with a holistic view of healthcare reform as Ecuador is undergoing one of the largest scale ups of Family Medicine in the world with an ambitious agenda to provide...