Skip to main content
Jennifer (Jenny) Roth, Awesome Aussie July 15 -July 21, 2014; Jenny Roth is from Simsbury, Connecticut and is currently a senior at Simsbury High School. She enjoys a good Shirley Temple and can’t go a day without laughing. When there’s a song playing, she will most likely be dancing to it.

Why did you decide to enroll with Rustic Pathways in Australia? 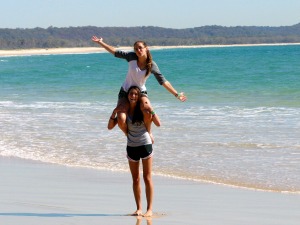 Jenny: I decided to enroll with Rustic Pathways in Australia because I had never gone on a Rustic trip before and I was slightly nervous about expanding my horizons drastically. For the most part (with the exceptions of kangaroo burgers and meat pies), the food was similar to that in the US and the culture and lifestyles are not completely foreign to me.

That being said, the activities advertised on the website really appealed to me, I love volunteering with children and I had many opportunities to do just that. However, part of me is also an explorer and Australia is well known for its wide range of adrenaline-pumping activities.

One final appealing aspect of Australia was the fact that because it is winter on that side of the world, so I would be able to get a nice break from the heat of the summer but still be comfortable in a tropical climate.

Jenny: While planning my trip to Australia, I initially thought that one, seventeen day trip would be a sufficient amount of time to experience Australia. I was terribly mistaken. The only thing I would do differently is connect trips and make my experience in Australia last as long as possible.

After the first week went by, it felt like I had only been in the country for two days. By the time we were departing to go home, I then felt like I had spent a sufficient time in Brisbane but was then ready for Sydney, Adelaide, or some other foreign city.

Regardless of where in Australia I went, I just wish I had gotten to explore more because there is so much to see and two weeks is simply not a sufficient amount of time to even begin to fathom the beauty held within Australia’s borders. 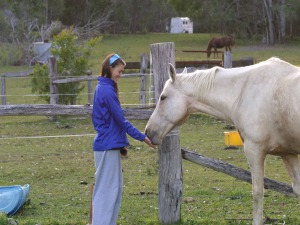 Jenny: Before going to Australia the closest thing to camping I had ever done was sleeping in an air-conditioned cabin in the middle of the woods. Once we arrived at Jabiru, I quickly realized I was in for a completely new adventure. With the temperatures at night averaging between 30 or 40 degrees and sleeping under the stars in a “swag,”I could just feel my horizons expanding.

Between the bush night walk, learning about horse energy, figuring out how to crack a whip, and attempting to get a boomerang to come back to me, Jabiru was one of my favorite parts of my Australian experience. While sleeping on mattresses and showering with warm water are nice commodities, nothing can beat camping in the Australian outback.

Not only was it an eye opening experience for myself, but for all of the new friends I had just met as well. Staying at Jabiru for two nights helped us all to bond much quicker than I had ever imagined. Even after being home for almost a month, the friends I met are still in close contact and the experience I had at Jabiru it still vivid in my mind. 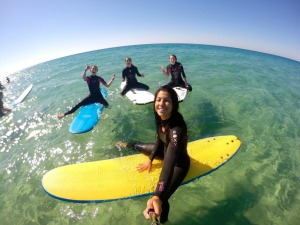 Jenny: The second week into the trip, we learned how to surf. Having never surfed before, I was extremely nervous going into the first lesson. Once getting into our wetsuits and claiming our boards, we walked out to the beach to learn surf safety, balance and how to stand up.

One of our surf instructors, Ben immediately took me under his wing and coached me through catching my first wave and although it was not a success by any means, he kept working with me and I slowly made improvements. By the third and final surf lesson, Ben had taught me how to catch my own wave and even steer myself a little bit.

While waiting for waves, Ben and I talked about how he got into surfing and why it means so much to him. His genuine love for being out in the water and helping people learn to love the sport really made me think about how appreciative I am of people like him who are able to inspire others through their passions.

Jenny: Having the chance to travel half way around the world to Australia was the best gift I have ever received. The memories I made through all of the adventures we went on as a group and the people I met will always have a special place in my heart.

After volunteering at two elementary schools, a children’s hospital, and with a special needs basketball team, I realized how much I loved working and playing with children. Before coming to Australia I had been dead set on majoring in Business once in college but this trip made me think otherwise.

Also, getting to spend over two weeks in a country so much more eco-friendly than the United States made me realize how grateful I am for the world around me.

The magical Land Down Under occupies a special place in our history as the origin of the first Rustic Pathways program in 1983. As Rustic has grown across the world, Australia has remained at the heart of our operations, thanks to the tireless efforts of our energetic and expert Aussie staff...