Skip to main content
My name is Nadia Guldager and I grew up in a smaller town about a half an hour north of Copenhagen in Denmark. I look like the typical blond Scandinavian, and I live in Copenhagen, were I recently graduated from a Bachelor of Business administration & Psychology. On weekends I often work as a bartender on the ferry between Oslo and Copenhagen, while I am studying, but now I am just working there until I will begin my master this fall.

I had many reasons to work as a NGO manager in Venezuela. First of all I love travelling and living in South America and learning Spanish was so intriguing. Second of all, even though my education from Copenhagen business school has been very useful to me, I felt like I needed more practical experience. Everything I knew was from theories I had read in books and articles. Thirdly, I felt like my surroundings expected me to be in a place where I knew where I wanted to go in life and how to get there, which can feel like a pressure, when you really don’t know yet.

Coming back from an entirely different life among people with completely different backgrounds and different perspectives on life, a sun burning 24 hours a day, and the most incredible landscapes, I am now ready to go on to my masters, because I have discovered that I was much more on the right track than I thought I was. 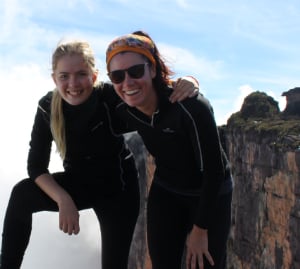 Nadia: Living and working for Aldeas de Paz was a much more life changing experience than I would have imagined. I arrived expecting that I would probably start out by learning from a manager, and maybe - after a while - do a bit of management myself. But on the first day in Aldeas de Paz, they asked me if I was ready for a lot of responsibility, which they gave to me fast but in portions. Soon I was standing in a situation, where I was learning every day.

I was welcoming and introducing new volunteers, I was handling the social media accounts, I was helping with accounting, I was handling conflicts and arranged meetings where we discussed what we needed to do to make other volunteers feel motivated. My job became an 8-17 working day at least, and I could easily have worked more.

Another good thing about Aldeas de Paz is that you can choose how much dedication, time and energy you want to put in it - you just need to let them know. To me this meant that I did not feel obligated to work as much as I did. I did it because it was the amount of time that I was willing to give which I believe is the essence of what lies in the word “volunteer.”

Nadia: What I will remember the most 10 years from now is the feeling - the feeling of the person I could let myself be in Santa Elena de Uairén. My mother tongue is Danish, and since Danish is not spoken anywhere else than in our small country, English has always been a part of my education and everyday life. Coming to Venezuela, and being forced to learn a new language, was of course a challenge. 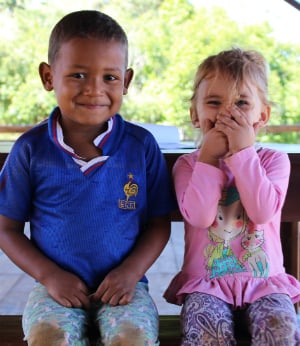 When I began mastering just the simple sentences with people in the village, and when I learned the different kind of body language Venezuelans have, I felt I wasn’t just a Gringa, but I was slowly becoming a friend who lives in Santa Elena. Then I began to feel how I could escape into a totally different person that was a long way from another blond student trying to get the best grades at Copenhagen Business School.

For me, the chance of letting so much go, meant that I really began feeling at home with the people and landscapes in the Gran Sabana. Being back in Denmark, I am sitting in one of the many new cafés, that just opened up. I am drinking Ginger&Lemon Lemonade and looking at my empty café latte glass, while being connected on fast wifi, with my good friend on the other side of the table. I can go out and buy clothes in my style, and I can do that with my credit card, and I can have one great new kind of meal after the other.

I love being back to my life, but I still think that in ten years, I will miss the beautiful unfussiness of the small town life in Santa Elena de Uairén. I will miss the blond girl going to the Friday markets, speaking Spanish, knowing and learning from everyone around her, and spending every day, trying to help others and helping other volunteers loving their work and life there. I will remember the feeling of being the person only Santa Elena de Uairén could let me be.

Nadia: I don’t believe that it is possible to let go of your safety net and go to a different part of the world with only a backpack for several months, without being influenced by the life around you. For me, I changed my worldview in a lot of ways. I had to learn to let go of the always-ticking clock on my IPhone, and instead just see who suddenly comes by for a meeting, because you could never plan people’s arrivals.

I could never know if the internet would work that day, or if the rain last night would mean that no children would turn up for school, or if suddenly the hospital staff would come by because they need help for something. So coming in with my Scandinavian background, where everything is written down in my little calendar, I probably got a little culture shock. The surprising thing was that everything always worked out and I learned to just relax like anyone else, and only plan my own work, and lean back and not care too much if everything else took a little to long according to my schedule.

Coming home to Denmark, I was thrown right back to keeping my whole life in my IPhone. I had to adapt to my life here again, but I still try not to plan the next ten years this week, but instead just trust, with the knowledge I gained, that life always works out; you just have to be tranquillo and see what happens. And for you who don’t know me, this was a very healthy part for me to use four months to understand. 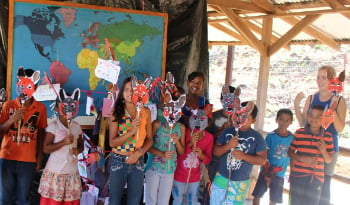 Nadia: Being in a small part of South America and discovering how much I never knew I needed to see, I am already longing to see more of this part of the world. I didn’t travel around after my stay in Santa Elena de Uairén, because I had been travelling around in Indonesia over Christmas after studying in Borneo the year before, so I had promised my family to be home for Christmas this year. I am happy about my decision, because one thing travelling has taught me, is how lucky I am to have the people I have at home. Still I definitely want to go back to explore more of the Latin world soon, and I can only advise anyone who is thinking of going to South America, to actually do it. The landscapes are as beautiful as you imagine, the people are as open and welcoming, loving of music and dancing as much as you think, and you never regret what you did, only all the things you didn’t.

Aldeas de Paz operates a Community Attention Center (CAC) in Samana where our local team consists of teachers, therapists, social workers and a pedagogue who help our beneficiaries from underprivileged communities both individually and as families. At our CAC and also through outreach programs in...