Skip to main content
Hello, my name is Ben! I'm a Japanese major attending Arizona State University. I'm originally from Massachusetts, but I moved out to Arizona a couple of years ago in order to study Japanese. 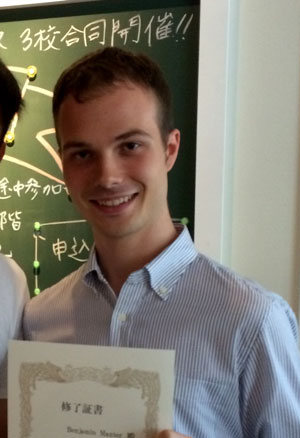 Ben: I originally was trying to do an exchange program at a university in Japan, but the application process was trying, it was expensive, and I'm not sure if I was even eligible unless I did the program through another American university (as opposed to on my own). Hokkaido Japanese Language School was an alternative choice, but it turned out that I was very fortunate to end up going there instead.

Ben: One thing I wish I knew before I went abroad was to not be intimidated. I can't speak for other countries, but the people I met in Japan were extremely friendly and helped me every step of the way until I could adjust. Another thing would be about the trains. Japan's transportation is often very convenient.

When I first arrived, I stayed in a hotel and the next day took a taxi to my more permanent residence. It cost me nearly $100. But little did I know that there was a train across the street that would have taken me to nearly the same place for only about $8.

Ben: I learned a lot about how to get along by myself. Not everything went according to plan, and I was all on my own 12,000 miles away from my parents or anyone else who would normally be there to help me. I learned to stay calm and trust myself to figure out how to get through unexpected situations a step at a time.

Ben: Do it. If you have a chance to go abroad, do it right away. There's nothing I've ever done in my life that was more worthwhile than going abroad, and I would recommend anyone to give it a try.

Ben: The hardest part was getting started. Choosing where to go, where to stay, what airline to fly -- it can all be really intimidating. Luckily my dad has had experience traveling, and was able to give me a push whenever I got worn out. After you're able to plan your trip and go once, it's a lot easier the second time. 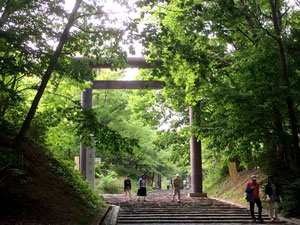 Ben: I always talk about when I first arrived in Tokyo and experienced how kind the Japanese people were. I had just gotten off of a 14 hour plane ride and was exhausted, and (little did I know then), sick. I did my best to navigate to the customs line, which wasn't that challenging since there was a lot of English written in the airport. But I'd never been through foreign customs before, and I wasn't sure what to do.

I wanted to ask someone, but all the people around me were from countries like Korea and China, so they didn't speak English OR Japanese. Luckily, one of the airport staff members was able to help me, but it took some time to get through the line.

Once I got through, I must have been the last person on the plane to get my baggage because there were two airport attendants waiting for me by my luggage. They called my name and said I would miss my connection flight if I didn't hurry. One of the attendants (wearing high heels) then proceeded to run with me all the way to my gate to make sure that I would make it. And that was just the beginning.

Ben: I was really excited to experience going to a new place, but as I got closer to the day I was flying out I started to have some anxiety that I was going to be disappointed. "What if it's not as great as I think it is? Maybe I'm too excited?"

Luckily, these worries were completely needless. Japan was everything I hoped for and more. I couldn't even believe how different things could be from my home. People dress differently and act differently. Everywhere you go you see things you don't see at home.

One thing I noticed right away about Japan was that there was zero trash anywhere. Even on some sidewalks there were signs that said "no smoking", just because other people have to stand there and wait for the walk sign. Trains were organized and quiet. You never had people blasting loud rap music or anything like that. Some people say that they don't like this part about Japan, but for me it was refreshing. Even the sirens on the ambulance were different.

So much was foreign to me, but it was a pleasant change. One reason I wanted to go to another country was to have something to compare to my home country, and decide where I really want to live.

Ben: This is a hard question. I feel like just about everything I experienced would be unlikely to experience at home. Even so, a really obvious thing would be food I guess? In America, it's not uncommon for people to think that all the Japanese eat is sushi and rice. Either that, or they don't know the difference between Japanese and Chinese and Korean foods. But there were all kinds of great foods that I got to try in Japan.

The most different meal was breakfast. The Japanese eat things like salad and miso soup for breakfast sometimes! I still can't bear to eat a salad before 12 o' clock... And the sushi that they did have wasn't much like what we have here. The fish was so fresh, and flavorful. I always look for some of the basic foods that I was able to eat in Japan, but it's pretty hard to find back here -- and I can't really remember the names anyway.

Ben: One great thing about Hokkaido Japanese Language School is that if you take the Summer Course, you get almost all of the activities packaged in with your tuition. If you don't want to worry about getting yourself around Hokkaido, finding places of interest, or anything else like that -- they'll take care of all of that for you.

In my experience, all of the staff and students were very friendly and easy to get along with. I'm a shy person myself, but try not to be too shy and you'll make great friends without much effort. Go on the trips! Even if you attend almost all of the activities they offer, you'll still have time to do things on your own if you wish.

When I went, I was only there for 6 weeks and for the first 2, I was a little nervous and didn't get to have as much fun as I should have. Make the most out of the whole time that you're there!

Ben: I loved Japan. It didn't take me long to realize that. At home, I'm always kind of the introverted guy who spends a lot of time at the computer. But in Japan, I went out every single day, even just to walk around a shopping area and not buy anything. I just wanted to be out there.

It made me feel much more fulfilled, like I was making good use of all my time. And it taught me to come out of my shell a little bit. I've noticed that over the last year I've had a much easier time with social interaction.

As for how I view my future, I feel like I finally have something to really work towards. I didn't know how much I would like travelling, but I realized that once I graduate from college I have every intention to move to Japan. Moreover, I also want to experience various other countries to see what it's like there. Having a global perspective on things is really pleasant.

What if I can't speak Japanese?

Ben: One thing that I was worried about was how much trouble it would be for me to get myself by with only the 2 semesters of Japanese experience that I had. Once you sit down on the plane it gets even more intimidating because they start doing announcements in English and in Japanese, and when you realize that you can't understand a word of the Japanese it makes you feel pretty hopeless. Don't worry!

First of all, just about any Japanese flight attendant will be able to speak English as well as another language such as Chinese. They are extremely professional and nothing like American flight attendants. In the airports and train stations, there is always English signage to help you, and there is always someone who can speak English if you're in a pinch. Taxi drivers usually DON'T speak English. When I took a taxi the first time, I asked the hotel staff to explain to the driver for me where I wanted to go.

At the school, people from all different countries such as Hong Kong, Thailand, France, Australia, Germany, and other places will all be there. Because of this, all of the classes (even the absolute beginner ones) are taught in Japanese. Don't be afraid. Learning in Japanese is the absolute best, fastest way to learn. The teachers are extremely talented at explaining what they mean without speaking English, and it's easy for them to tell if you understand or not because they only have a maximum of 6 students to keep track of. My teacher, for example, was really good at drawing. Every time she wanted to explain something to us she could draw it out on the board and we would understand.

All in all, my experience with Hokkaido Japanese Language School was fantastic. I learned more in 6 weeks than I could have ever hoped, and ended up ahead of my classmates at home by nearly a semester. If you have the opportunity to go to this place, don't hesitate for even a second. I can't imagine anyone regretting it.

Hokkaido Japanese Language School’s Standard Course includes 15 morning Japanese lessons every week focused on speaking and day-to-day Japanese conversation. Classes are conducted entirely in Japanese and are limited to eight people, which allows for plenty of individualized attention and time to...